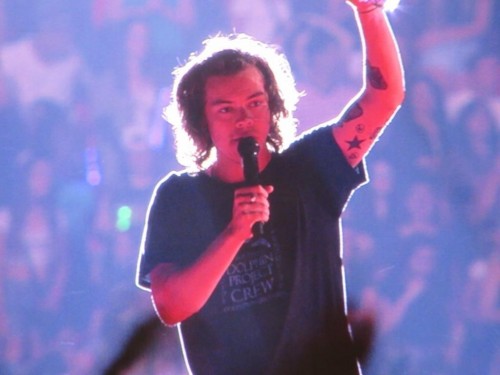 On One Direction’s US Tour kickoff concert in San Diego, Harry Styles called out SeaWorld. After noticing Dolphin Project Ambassador and Game of Thrones star Maisie Williams among the concert goers, Harry asked the sold out crowd at Qualcom Stadium:

Harry became passionate about dolphins and after watching ‘The Cove’ & ‘Blackfish’ documentaries. Having visited captive dolphin facilities in the past, he’s made an informed decision to raise awareness about their plight.  He reached out to Dolphin Project’s Ric & Lincoln O’Barry.

“We’ve reached a tipping point,” said O’Barry. Dolphin activists no longer represent the fringes of public opinion. “Ringling Bros. [Circus] saw the writing on the wall and is ending their use of elephants. SeaWorld doubled down on their position. They have ramped up their advertising, yet their stock continues to drop. The issue of keeping dolphins in captivity has gone mainstream.” Ric O’Barry is asking that everyone take the pledge not to buy a ticket to a dolphin show.

Check out some of Harry’s Tweets:

Just watched ‘The Cove’ and it’s one of the best and worst films I’ve ever seen. Unbelievable. Watch it and see what you think.. — Harry Styles. (@Harry_Styles) September 21, 2012

Thank you Harry for caring! Celebrities and fans from around the world chimed in to Harry’s defense.

Anyone thinking of going to @SeaWorld or taking their kids I implore you to watch #Blackfish first. — Anna Passey (@MissPassey) July 12, 2015

and who needs SeaWorld anyway when we can have Harry whaling every night #dontgotoseaworld pic.twitter.com/WV3rXUBt7q — 3ème sexe (@3eme_sexe) July 12, 2015

Click here to buy a limited edition shirt and spread the message!

Take the Pledge to End It Here