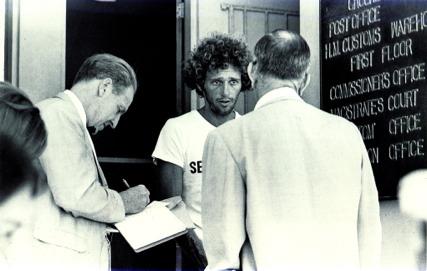 It was 43 years ago today that DolphinProject.com was founded.

At about 8:00 AM, I was placed in a small cell for trying to free a captive dolphin from the Lerner Marine Labortory in Bimini, Bahamas Islands.  Except for a very large pig in the cell next to me, I was the only one in the Bimini jail.

At this time in our history there was no Greenpeace, no Sea Shepherd, nobody and no NGO working on this issue – actually it was not even an issue; it would take another 20 years of work to make it an issue.  These were lonely times.

Things have changed since that first Earth Day.  Today the dolphin captivity issue is a real issue, and thousands of compassionate individual activists and several international NGO’s are now working on this important issue.

I want to take this time to THANK YOU each and every one who care about captive marine mammals and are doing something to bring about change for the common good.

The dolphin slave trade will be abolished thanks to you!