Happiness is a wild dolphin – from the eyes of a youngster 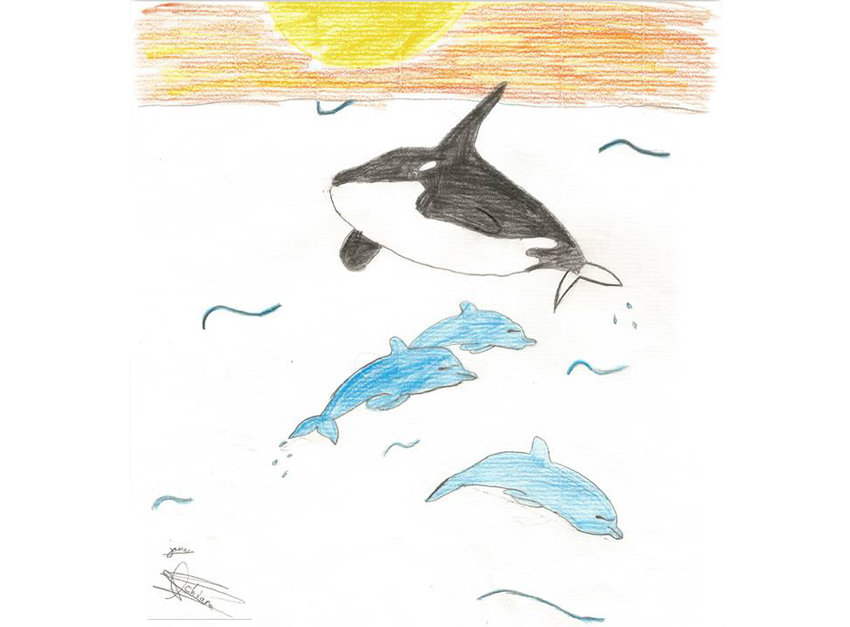 What do I tell my parents?”

“Why isn’t the dolphin splashing? Why isn’t she happy?”

“Where are its friends?”

It was a cloudy, cool day in late May. Despite the parking lot being just over half full, the stands in the dolphin stadium were virtually empty. The trainer on the stage seemed to be performing for himself, clapping, yelling and putting on a “whale of a show.” The dolphins hovered obediently at his feet, waiting for their fish rewards. Although he did his best to make it appear as if the mammals were truly tail walking and squeaking and squawking out of sheer delight, it remained painfully obvious they were merely behaving as directed. And that was the operative term: behaving.

What if the dolphins don’t want to play? Will they still get fed?”

This particular day in July was just – hot. The kind of hot that makes one thirsty, even if they’ve just consumed a cold beverage. The sun was beating down and working in tandem with the pavement, heat radiating from both above and below. I couldn’t help wonder what the temperature in the killer whale pool was. The whale circled slowly – lethargically – in endless, lazy circles in the sterile tank. Not one “enrichment device” (a.k.a. toy) was present. And of course, he was alone. Always alone. As he neared the periphery, a young boy started asking questions of his mother. And then, to my surprise, he started to cry.

Where is his family?”

Reply: “He doesn’t have any family.”

School had just been in session for a little over a week, after a summer break of no classes. From what I ascertained, a father and his young daughter visited a marine park as part of an assignment. Again, I noted how empty the auditorium was, even though this was likely one of the last, warm weekends of the year. The little girl started to clap when the dolphins did their coordinated high jumping, her father yelling: “Look at the fishes!”

“They’re not fishes daddy! They’re dolphins! They are just like us, with mommies and daddies of their own.”

The father turned away, and I couldn’t help but catch his eye in censure. The show continued, when suddenly, the child pulled her father’s arm.

“Do the dolphins go home now to their brothers and sisters?”

I practically had to seal my mouth shut, as I awaited his response. He said – nothing. And, to my shock, she started slapping his leg, asking to go home.

As parents and guardians of our most precious assets – those responsible for the very future of our planet – we need to guide our children in the best, possible manner. And we also need to listen to the very thoughts and voices of those we hold so dear. When a child wonders what he/she must tell his/her parents about why “marine parks suck,” as one, particular child did, we need to take note and realize that kids get it!

Instead of subjecting children to a fabricated “marine” world where dominance is considered acceptable, why not empower them with tools to encourage respect for all life? Critical thinking children become critical thinking adults. And, as adults, we are in the unique position to provide the best opportunities in order that our children enjoy healthy and happy lives, in a gentle and tolerant world.

The following article was compiled from dozens of audiotaped clips and handwritten notes, taken at various marine parks. In them, I’ve observed the comments and reactions of children while watching dolphins and whales in captivity, some performing and some not. These comments have not been solicited in any way.

Featured image: A 10 year-old’s rendition of happy dolphins, under a sunlit, wild sky. Even the dorsal fin on the killer whale is tall and proud! Beautiful – and a reminder to all us adults that youngsters get it!