From Tank to Sea 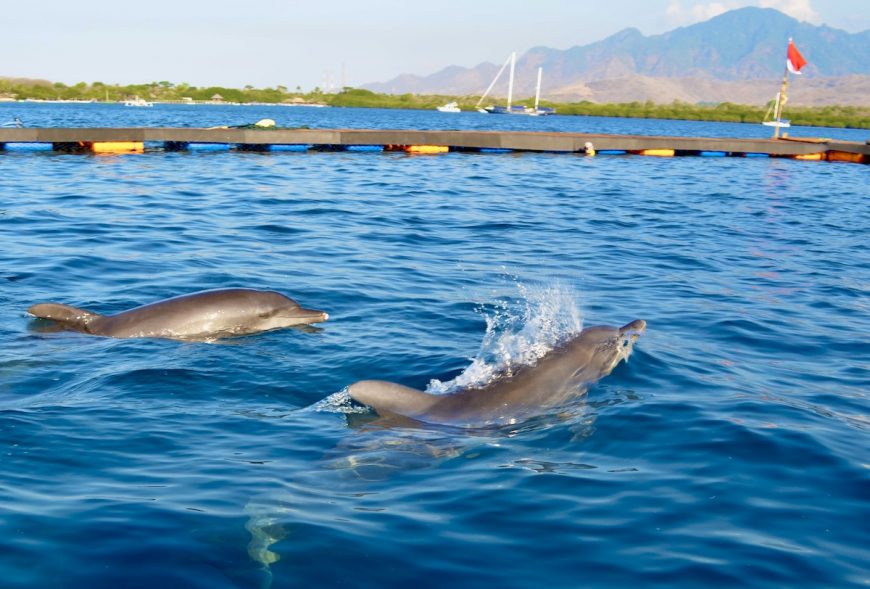 Dewa and Johnny’s transformation since we evacuated them from deplorable living conditions at the Melka Hotel in north Bali is remarkable. Confined in a small, filthy tank, they were exploited in theatrical shows and a dolphin assisted therapy program for people with paralysis and other disabilities. We witnessed several incidents of stereotypical and even psychotic behavior. Johnny would languish on the surface of the water for hours, lethargic and inactive. And as documented in heartrending footage shot by Femke den Haas, Dolphin Project’s Indonesian Campaign Manager, Dewa expressed his desperate frustration by repeatedly jumping up against the broken tiles of his tank, causing several bleeding cuts on his body.

When we transported the dolphins to a new large floating sea pen in West Bali National Park on October 8th, I tried to imagine what the transfer was like for them with all the turmoil and confusion in their lives since humans yanked them out of their ocean world years ago. They had known only shallow tanks in the dolphinarium’s dungeon-like surroundings and had no idea they were going to a deep sea enclosure. They must have been frightened and worried when our rescue team hoisted them out of the tanks and placed them in transport boxes aboard a truck. During the two-hour ride from the Melka Hotel in Lovina to the awaiting sanctuary, they probably wondered what was going to happen next. When we do dolphin rescue missions such as this one, we try to let the dolphins know that we have come to help them and that their days of exploitation are finally over. I hope they could sense that. 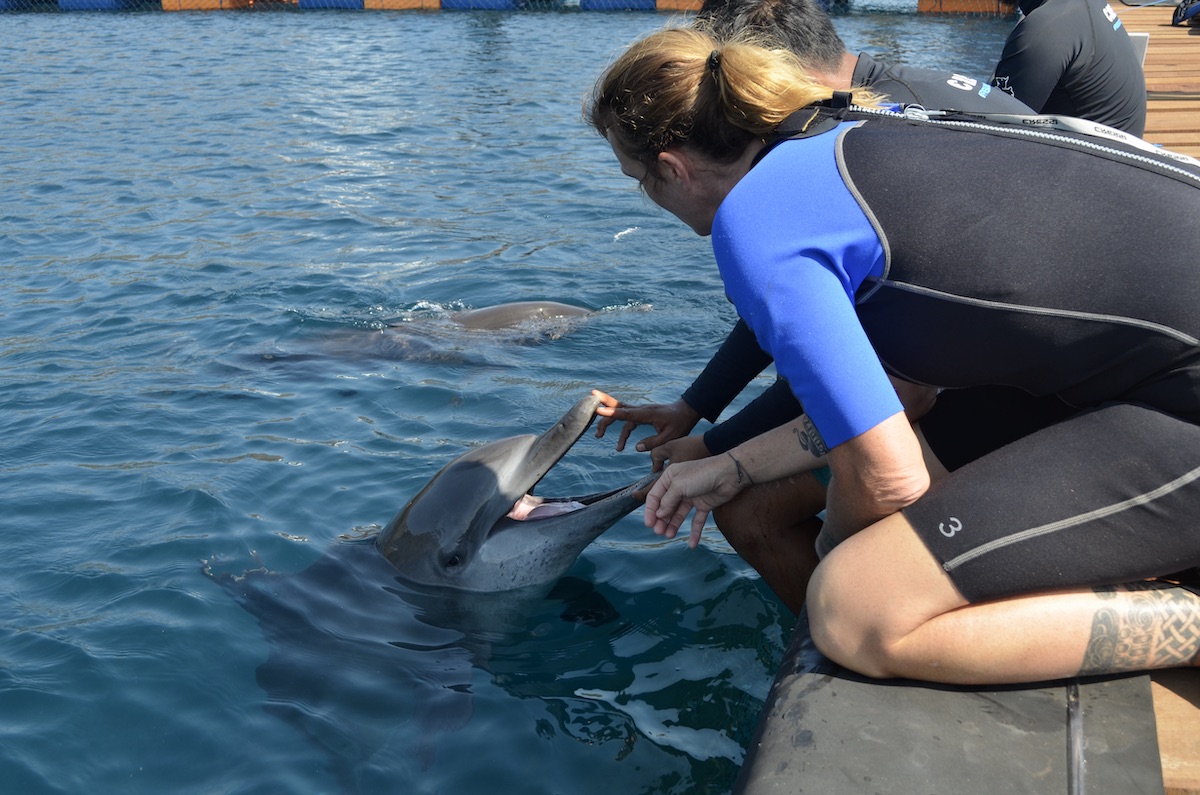 Dewa and Johnny will always need medical care and attention, and we are committed to providing them with that for the rest of their lives. Credit: DolphinProject.com

Dewa was the first to be lowered into the sea pen. Johnny followed 12 minutes later. He immediately joined Dewa in the middle of it, and the two dolphins began exploring their new home. They had been separated from the ocean for such a long time. What went through their minds? The small tanks’ heavily chlorinated water is stagnant and completely lifeless. After all these years, what did they think as they once again felt real ocean waves washing over them and the tug of currents? Did they recognize the feel of the ocean’s natural rhythm and the sounds of the underwater world they lost so many years ago?

They did something I will never forget. They rolled over in the water, gently and slowly, with their eyes closed, as if just wanting to enjoy the moment and take it all in.

Now, several days after we evacuated them, Dewa and Johnny are spending hours each day swimming, breaching and playing with each other. It is magical to witness their transformation. Dewa’s cuts are healing, and so far we have seen no sign of the deeply depressed demeanor they exhibited at the Melka Hotel. It is absolutely amazing to sit on the sea pen’s wooden dock and watch them engage in energetic, boisterous play.

But I keep thinking how in a perfect world, Dewa and Johnny would not be here. They would be out in the open ocean with their families catching fish, navigating, and nourishing their strong social bonds with pod members. They lost that on the day humans captured them and will never get it all back. Johnny and Dewa have suffered tremendous cruelty in the hands of humans. Johnny has no teeth at all, and he is blind. Dewa has only five teeth left. Years of deprivation and suffering has affected the mental health of both dolphins. That is the aspect of captivity that the world’s dolphinariums conceal from their customers: Sometimes the damage from incarceration and exploitation is so severe, it can never be fully repaired. And that could be the case with Dewa and Johnny. Both dolphins are underweight, Johnny critically so. Dewa and Johnny will always need medical care and attention, and we are committed to providing them with that for the rest of their lives. 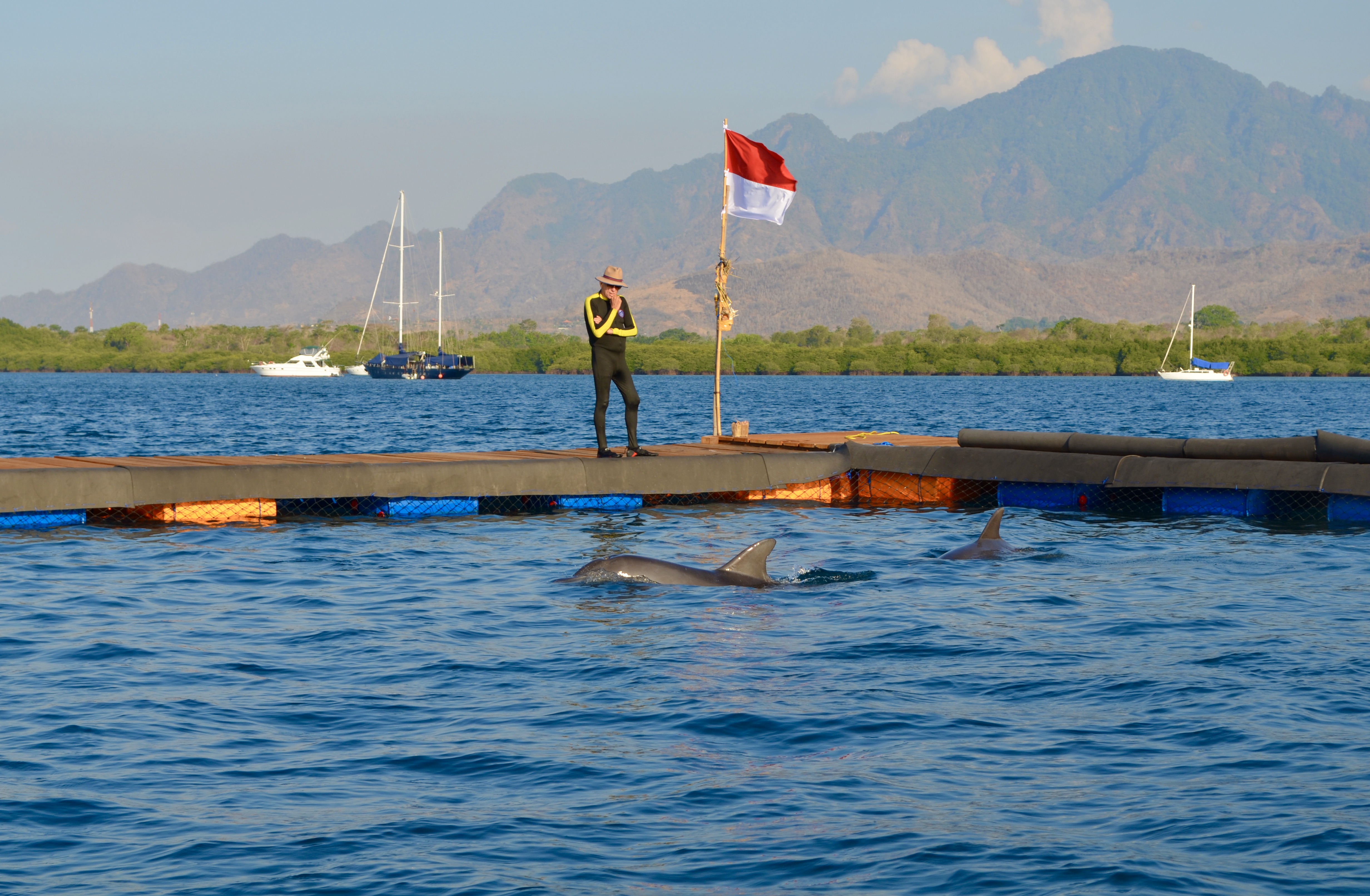 We are committed to giving Dewa and Johnny lives filled with dignity and peace. There will be no more tricks to perform and no more languishing in a small, barren concrete world. Credit: DolphinProject.com

We also are committed to giving them lives filled with dignity and peace. There will be no more tricks to perform and no more languishing in a small, barren concrete world. No more chlorine. No more cheering audiences. And no more long lines of disabled and ill people who demand healing. However, we can never give them back everything that humans took from them.

Captivity caused too much damage for them to be released back into the wild. This alone shows that it is a huge lie when the dolphinarium industry presents captive dolphins to paying audiences as ambassadors for their wild relatives. They are not ambassadors. They are victims. In no way do they represent dolphins in the ocean that live in accordance with their true nature. What they do represent, however, is nature that has been crippled and distorted.

I wish with all my heart that we could turn back time and bring Dewa and Johnny back to that moment just before humans captured them. I sometimes picture how they could still be swimming alongside their families and pod members wild, free, and uninterrupted today. But as a result of consumers’ demand to watch dolphins perform and to swim with them, reality turned out very differently for these two dolphins. The fateful day their paths crossed that of their human captors, they lost everything that makes life worth living for a dolphin: their families, their world of sound, and the ability to swim freely. 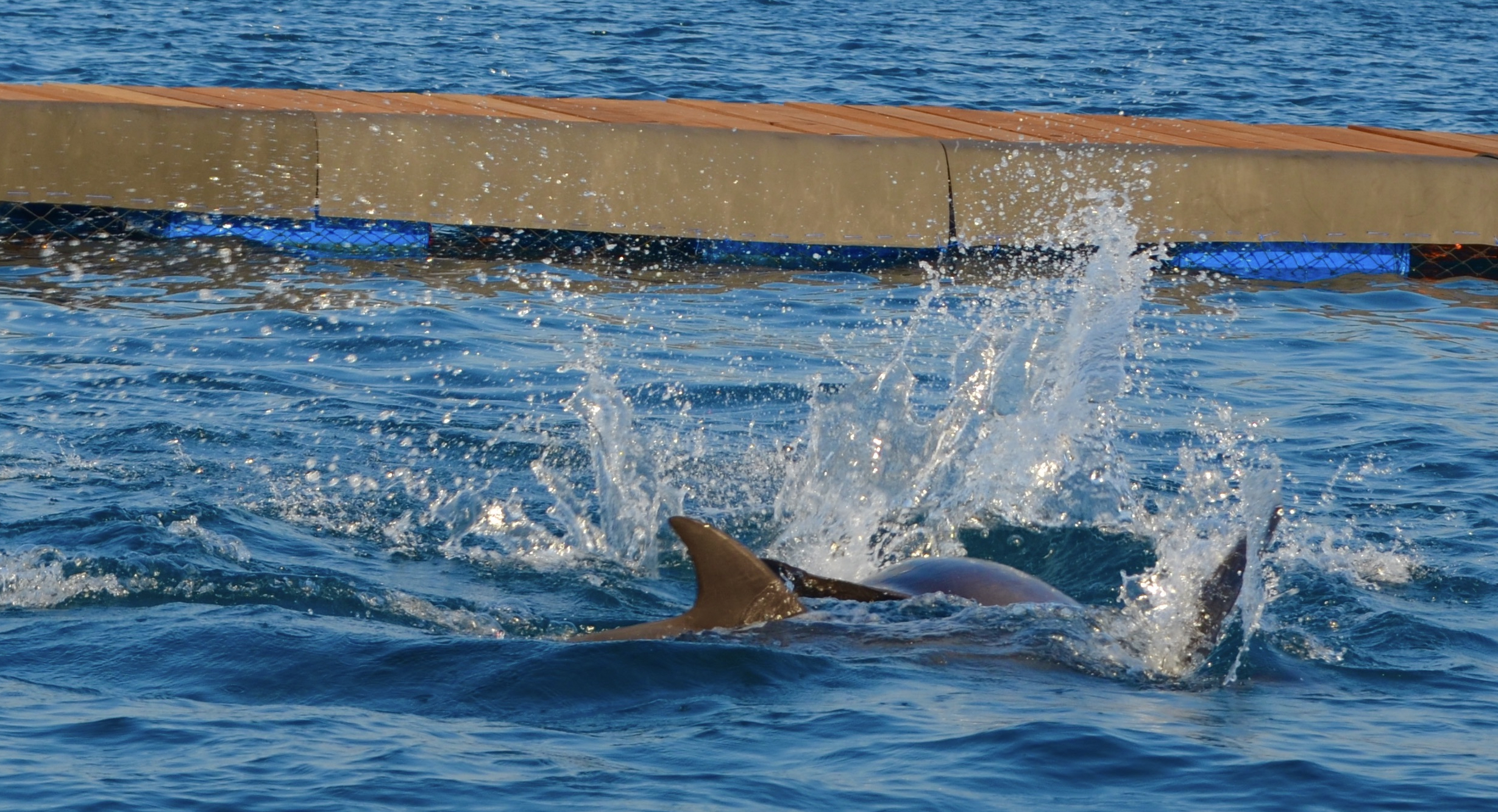 In the tanks, Dewa and Johnny were often logging on the surface since there was nothing else for them to do. In the sea pen, there is sometimes so much turmoil in the water, we can’t even see them. Credit: DolphinProject.com

We want people to get to know Dewa and Johnny. We want people to hear their stories. We will keep telling people why the dolphins are here and where they came from. We will continue to convey our message to the public that dolphins evolved in the ocean for a reason and that they do not belong in captivity. Indeed, confining them to barren, bleak concrete tanks defies all logic and everything that is decent.

The contrast between Dewa and Johnny‘s behavior in the concrete tanks and their behavior in the sea pen is magical to witness. In the tanks, they were often logging on the surface since there was nothing else for them to do, and they could swim only a few feet before a wall stopped them. In the sea pen, there is sometimes so much turmoil in the water, we can’t even see them. All we see is ocean water splashing to all sides. Sometimes they stay submerged for a long time. Sometimes they swim upside down. 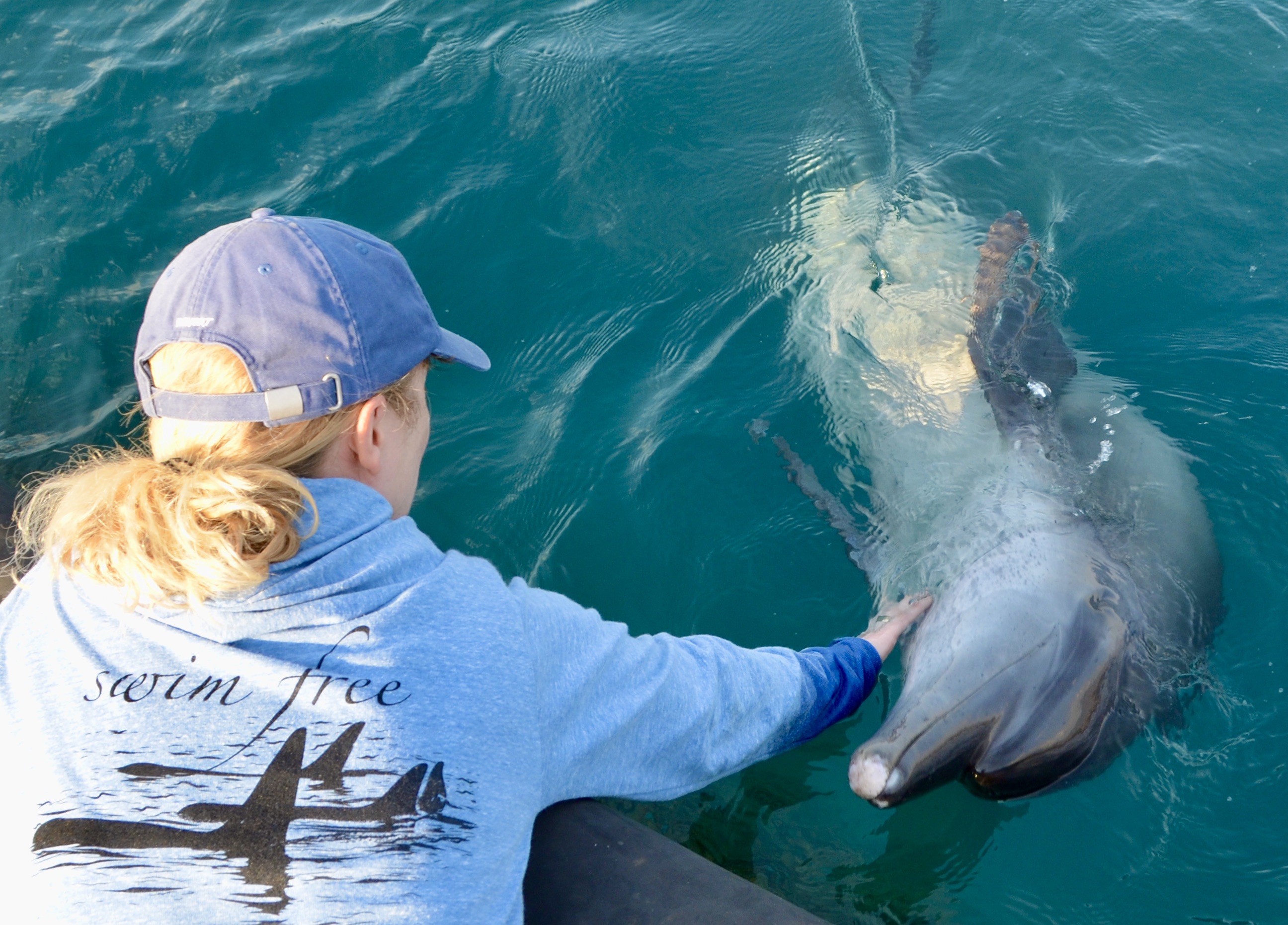 Johnny in particular seeks out contact with us, perhaps because he is blind and needs that reassurance that we are still there. Credit: DolphinProject.com

Every once in a while they appear next to the dock wanting to be rubbed or just for a moment feel a hand on their beak. And we give that to them. Johnny in particular seeks out contact with us, perhaps because he is blind and needs that reassurance that we are still there. Their personalities are quite different, and we are slowly getting to know them. It is still too early to tell if they are able to fully let go of the psychotic behavior they exhibited at the Melka Hotel.

Due to their delicate health, Dewa and Johnny will always have people in their lives. I am amazed that they still want anything to do with humans. Perhaps they sense that not all humans are alike. Giving them back a piece of the ocean was the right thing to do. The ocean has healing properties, and this, to them, is home. We watch them as they return to the middle of the sea pen, water splashing to all sides as they again engage in boisterous play. We hope that their recovery will continue—and in time some of the hurt finally, fully heal.

Two ailing dolphins freed from captivity into the ocean

Life has been turned around in a beautiful way for these two dolphins.Video by Michael Dahlstrom