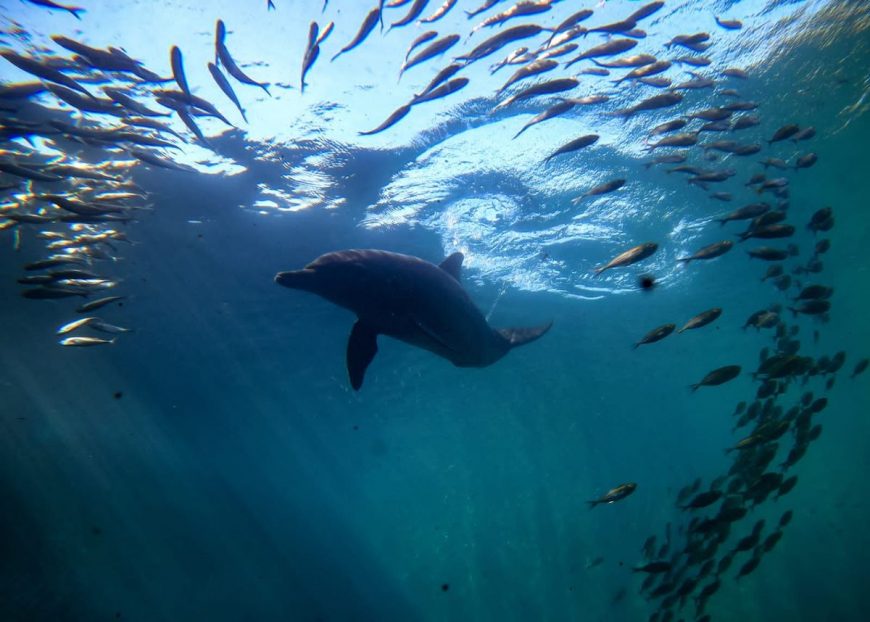 The dolphins are ready. Our round-the-clock team of caregivers are ready. And now, approximately three years since their rescue, Johnny, Rocky, Rambo are going to be given the option of returning to life in the wild.

No one could have guessed that mere months after the dolphins were rescued from the deplorable living conditions at the Melka Excelsior Hotel in North Bali, Indonesia, a global pandemic would cause the world to come to a standstill. Plans were put on hold, new challenges needed to be met, and escalating stressors would befell the planet. With three dolphins in our care rehabilitating at the newly-formed Umah Lumba Rehabilitation, Release and Retirement Center in Banyuwedang Bay, West Bali – the first and only permanent dolphin rehabilitation, release and retirement facility for formerly performing dolphins – our team did the only thing they could do: they stayed behind, ensuring the dolphins received 24/7 protection and care.

Looking back at the condition Johnny, Rocky, Rambo were in at the time of their confiscation, it’s hard to believe these are the same dolphins, who today, are stronger and more vital than ever. They are catching fish efficiently, their bloodwork and weights are perfect, and they prefer to spend their time underwater, as nature intended. 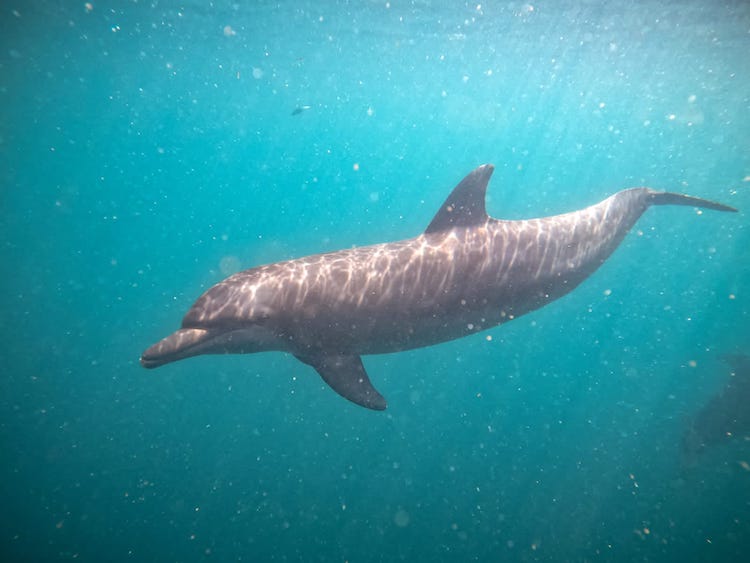 Captured in the Java Sea, Johnny was carted from town to town, and forced to perform in a plastic pool in Indonesia’s traveling circus. His next stop was a heavily chlorinated swimming pool in the Melka Excelsior Hotel in North Bali, where, for many years, this older dolphin was held in isolation. Johnny’s captivity caused him great suffering, including skin damage and an injury to his right pectoral fin. His teeth were worn down to below the gum line, and he was also underweight. In 2019, we rescued Johnny and transported him to the Umah Lumba Center. He has since gained weight and strength, and spends his days exploring the large sea pen, where he experiences the natural rhythms and sounds of the sea. In the summer of 2022, after careful planning and evaluation, Johnny was given new teeth in a first-ever technique. With the success of the procedure, Johnny is now able to catch, grasp and manipulate live fish.

Johnny suffered a severe cornea injury of his left eye in the remote past. The initial injury is not recorded in his history but a common cause of eye injury in dolphins is traumatic rubbing against the stretcher fabric or nets during capture or transport. These two events were common in the previous life of Johnny as part of the traveling dolphin circus. The cornea is thickened and permanently opacified as a result of healing. The eye globe is intact and the eye is visually functional as ascertained by close examination of the eye itself and his behaviorally accurate response to hand signals visible from that side only. It has no impact on his daily life. 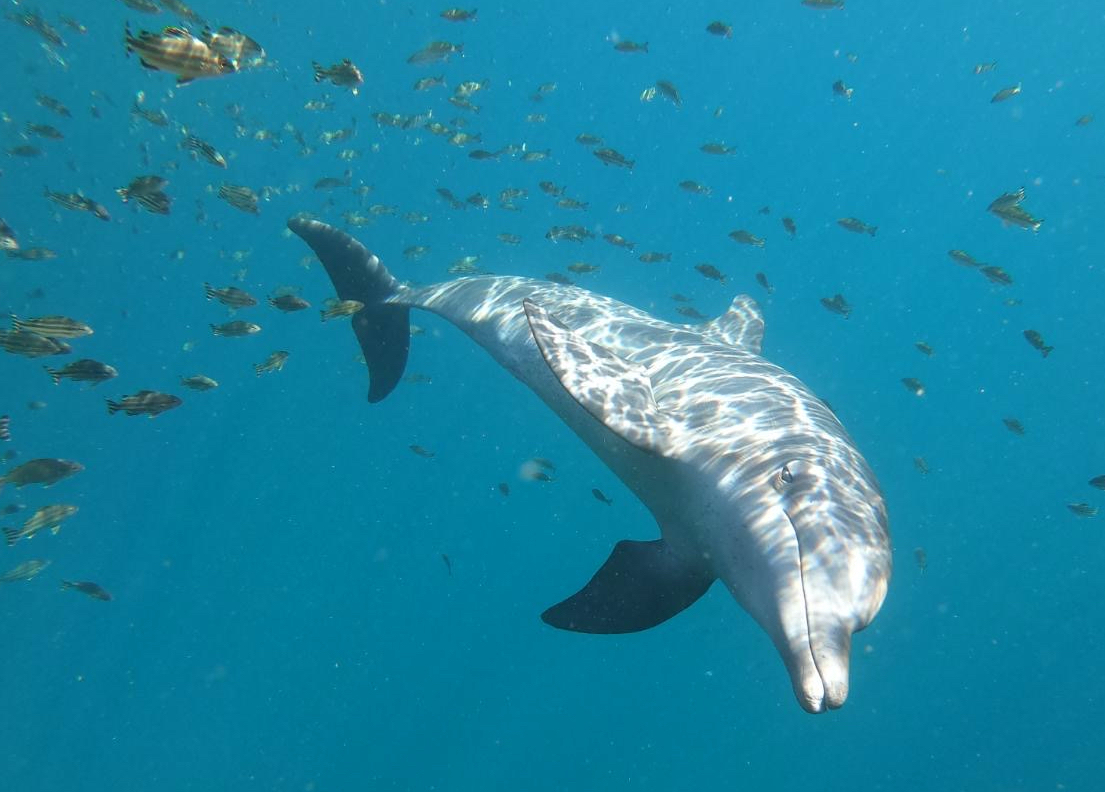 Imagine being captured from the wild, then forced to perform in one of the world’s most abusive shows – the traveling dolphin circus. That’s what happened to Rocky. But it didn’t end there. After spending years as a circus performer, he was then sold to the Melka Excelsior Hotel in North Bali, where, for 10 years, he was confined to a small swimming pool interacting with an endless stream of tourists. Since we rescued Rocky in 2019, here, in the crystal clear waters of the Umah Lumba Center, he has gained weight and strength, and is once again enjoying the natural rhythms and sounds of the sea. 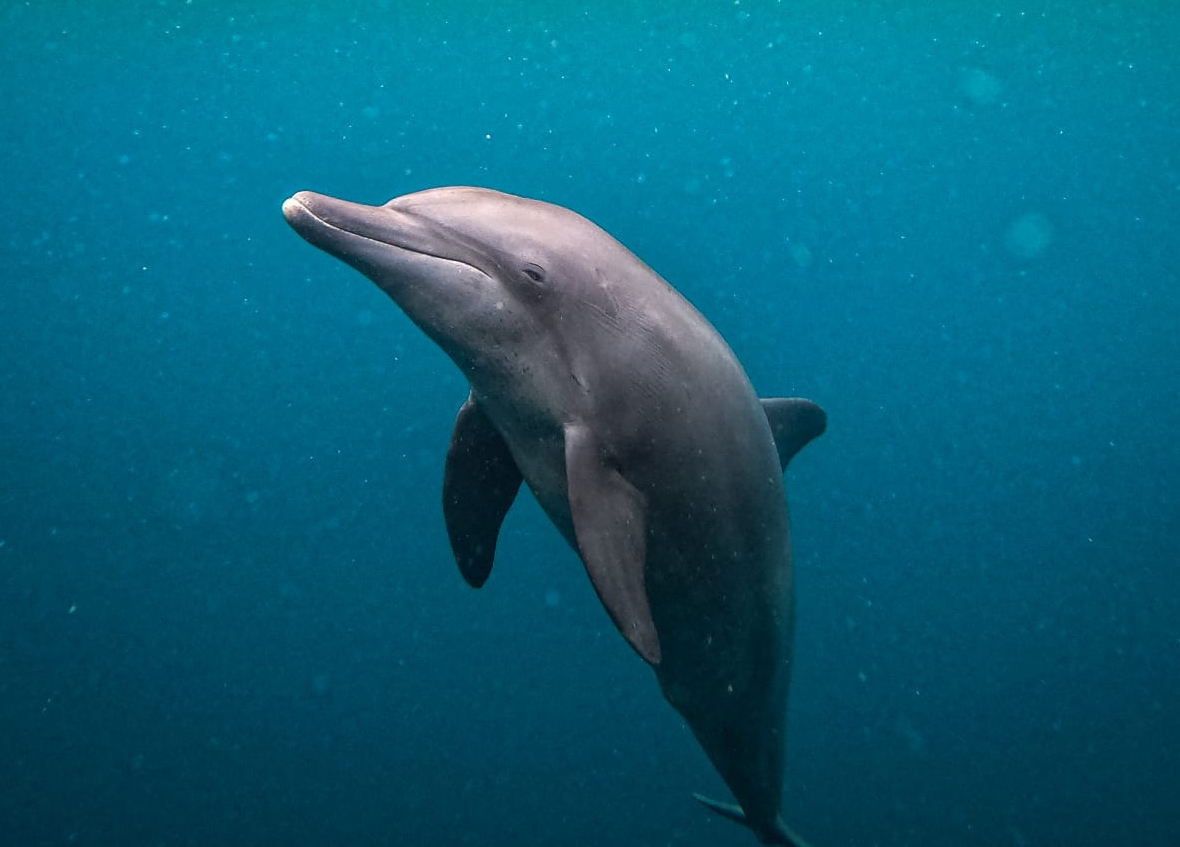 It’s hard to envision the suffering endured by Rambo, violently captured from the ocean and forced to perform in Indonesia’s notorious traveling dolphin circus. If that wasn’t enough, this young dolphin was then confined inside a small swimming pool in the Melka Excelsior Hotel in North Bali, and, day after day, was forced to perform for paying tourists during loud theatrical shows. Since his rescue in 2019, Rambo has rehabilitated at the Umah Lumba Center, transforming into a highly energetic individual that is full of life. 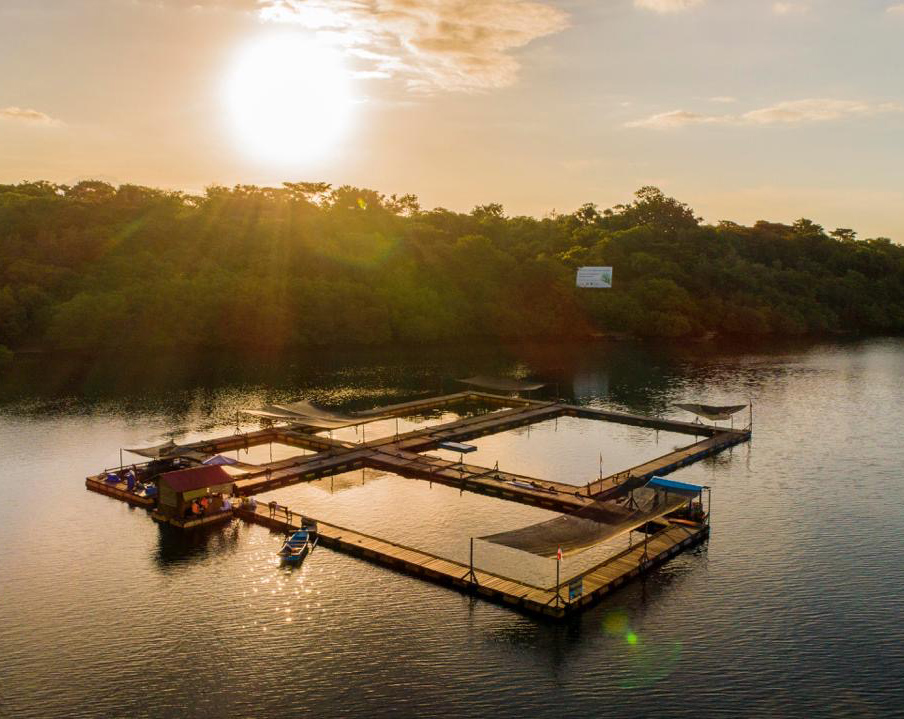 As documented in the Protocol for Releasing Captive Dolphins, ideally, the mammals should be released into their home range. There were two release sites recommended: Karimun Jawa island or West Bali. While our team of experts advocated for the former, the latter was selected by the Indonesian government.

“We aren’t actually setting Johnny, Rocky and Rambo free. Freedom is about choices and decisions. A portion of the fence will be removed by government officials and the dolphins will have a choice: if they choose to stay we will take care of them for life. If they choose to go we will monitor them via satellite. If they get into trouble we can find them and bring them back.” ~ Ric O’Barry, Founder/Director of Dolphin Project

In early September, the gate at the Umah Lumba Center, which separates the dolphins from the rest of the bay will be opened. Johnny, Rocky, and Rambo will be given the choice to leave, or to remain in the protective floating sea pens of the Center. In addition, they will always be able to return at will, during any point of their journey. 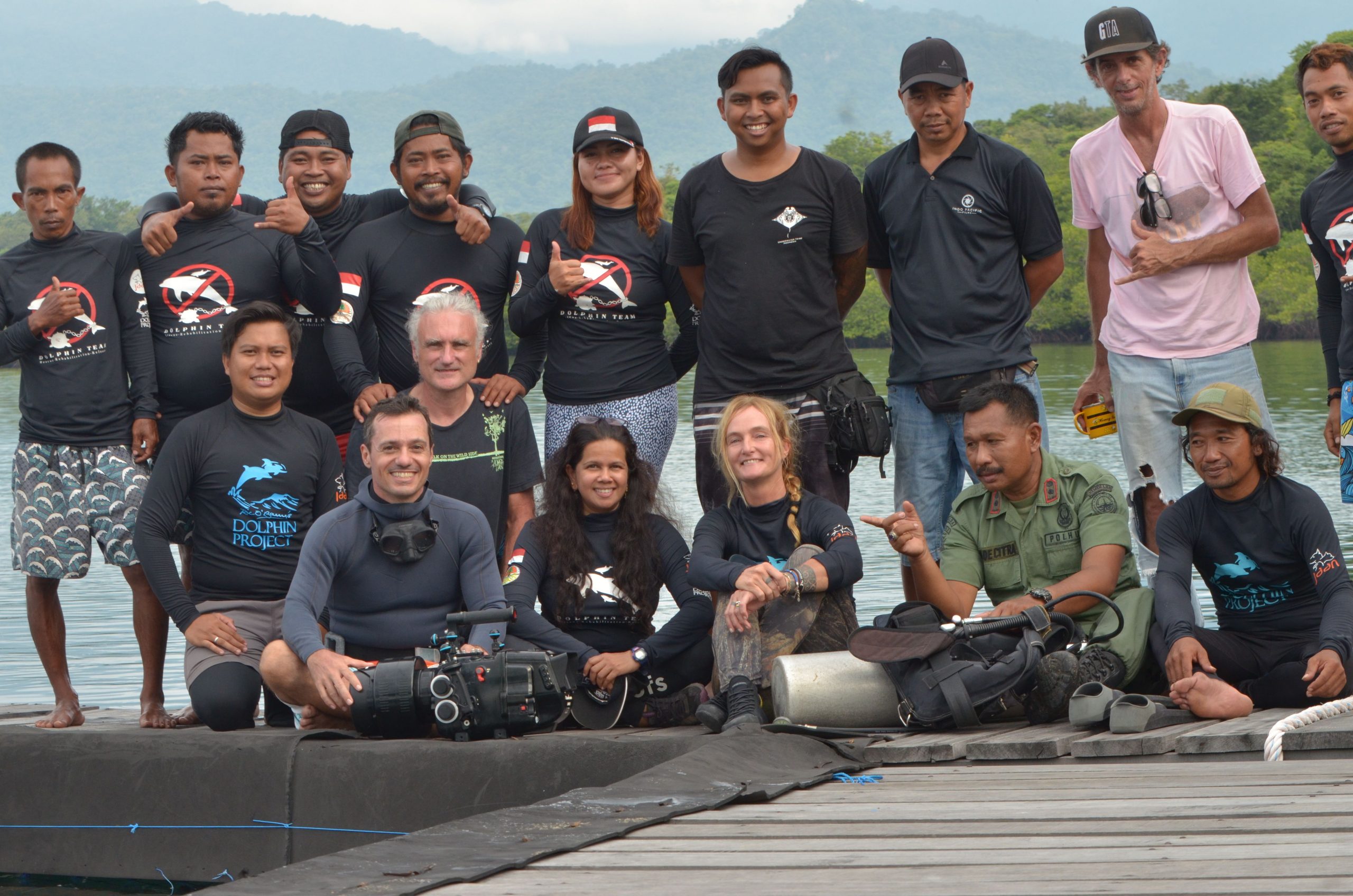 There are truly no words to describe our gratitude to our loyal supporters and partners, without whom, none of this could have happened.

“This is a new day for dolphins in Indonesia. We want to expressly thank our local partners with the Ministry of Environment and Forestry of the Republic of Indonesia, BKSDA Bali and West Bali National Park. Together they created the world’s first and only permanent dolphin rehabilitation, release and retirement facility for previously captive dolphins that will become the model for future release facilities around the world. This is only the beginning” ~ Lincoln O’Barry, Campaigns Coordinator of Dolphin Project.

So, while it might seem that we’ve reached the finish line, in reality, the next phase of the dolphins’ journey is only just beginning. State-of-the-art GPS tracking will monitor the dolphins for one year. Work needs to be completed so that the Umah Lumba Center will be ready to accept more dolphins in need. And, while we hope the dolphins will return to their natural life as wild and free ranging mammals of the sea, our pens will always remain open, should they choose to return for a short while, or decide to make the Center their permanent home. 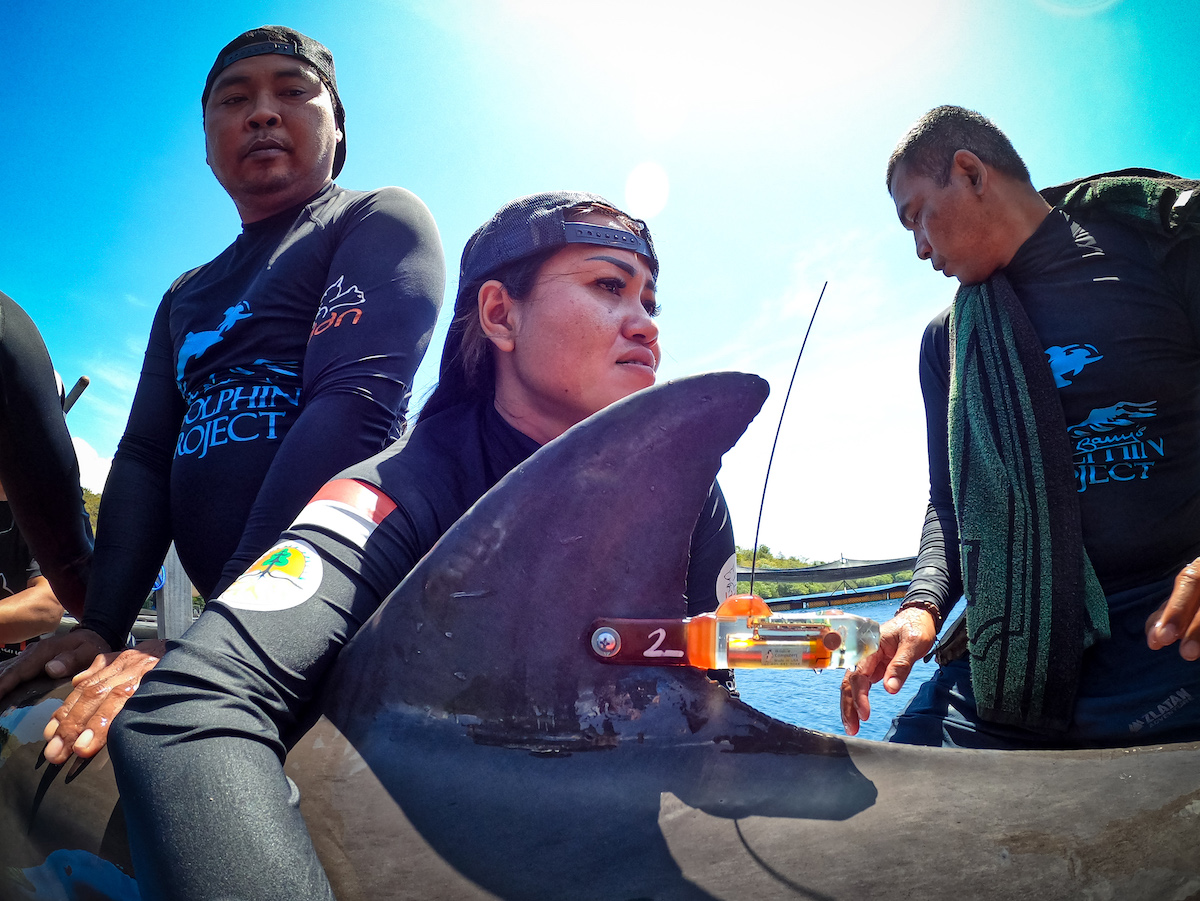 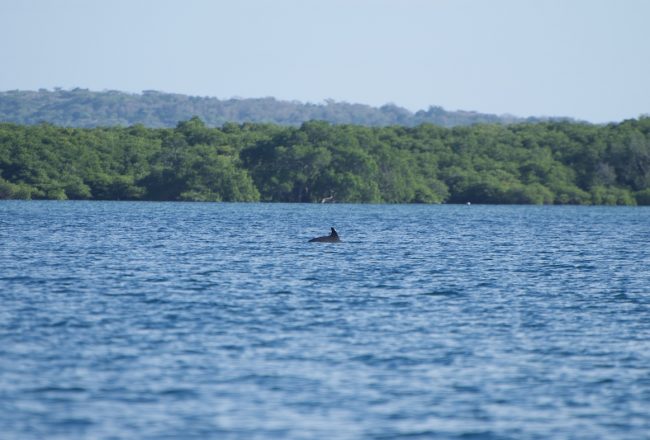 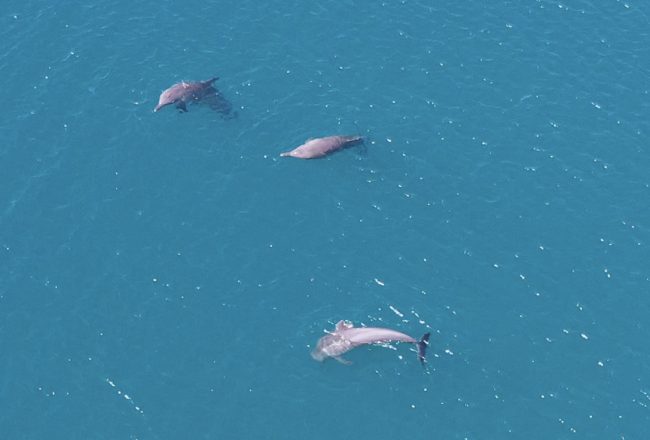