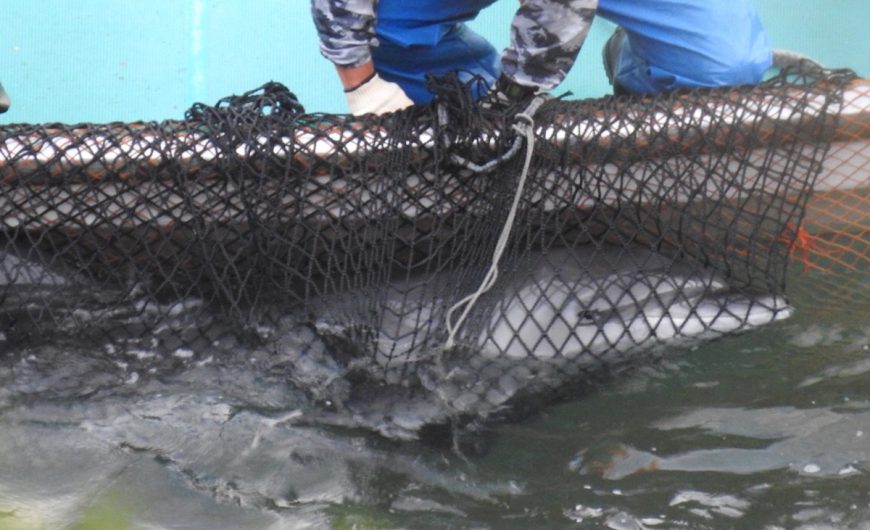 Taiji, 1/11/19: As the sun sets over the Cove, the calm waters, once boiling with 120 terrified bottlenose dolphins, now softly lap the shoreline in an erroneously peaceful rhythm. The blood which turned these waters red only hours prior has dissipated now as well. It is an eerie scene, considering the horror show that took place here over the past, four days.

The morning of January 8 began as too many morning begin here in Taiji: the dolphin hunters boarded their 12 motorized vessels and quickly located a pod of Risso’s dolphins who, unbeknownst to them, were swimming in what could easily be considered the most dangerous waters for cetaceans. These dolphins were quickly driven into the Cove and three were involuntarily abducted into a life of slavery while the other nine were slaughtered around them. The hunters towed the dead bodies to the butcher house for processing and finished work.

But that morning’s hunt wasn’t enough for them.

Later that afternoon during a drive through town, my heart stopped as I turned the corner to the harbour and saw empty berths where the banger boats dock. I drove to the Cove, but it looked as empty and innocent as a postcard. From a hill overlooking the harbour I could see the Coast Guard and a skiff heading towards the Cove – a surefire sign that a hunt was indeed underway.

Hiking up Takababe Mountain there was a lump in my throat and a sickening feeling in my stomach. It was highly unusual for the hunters to go out for a second time in one day, which meant they must have been tipped off to something of great monetary value to them. 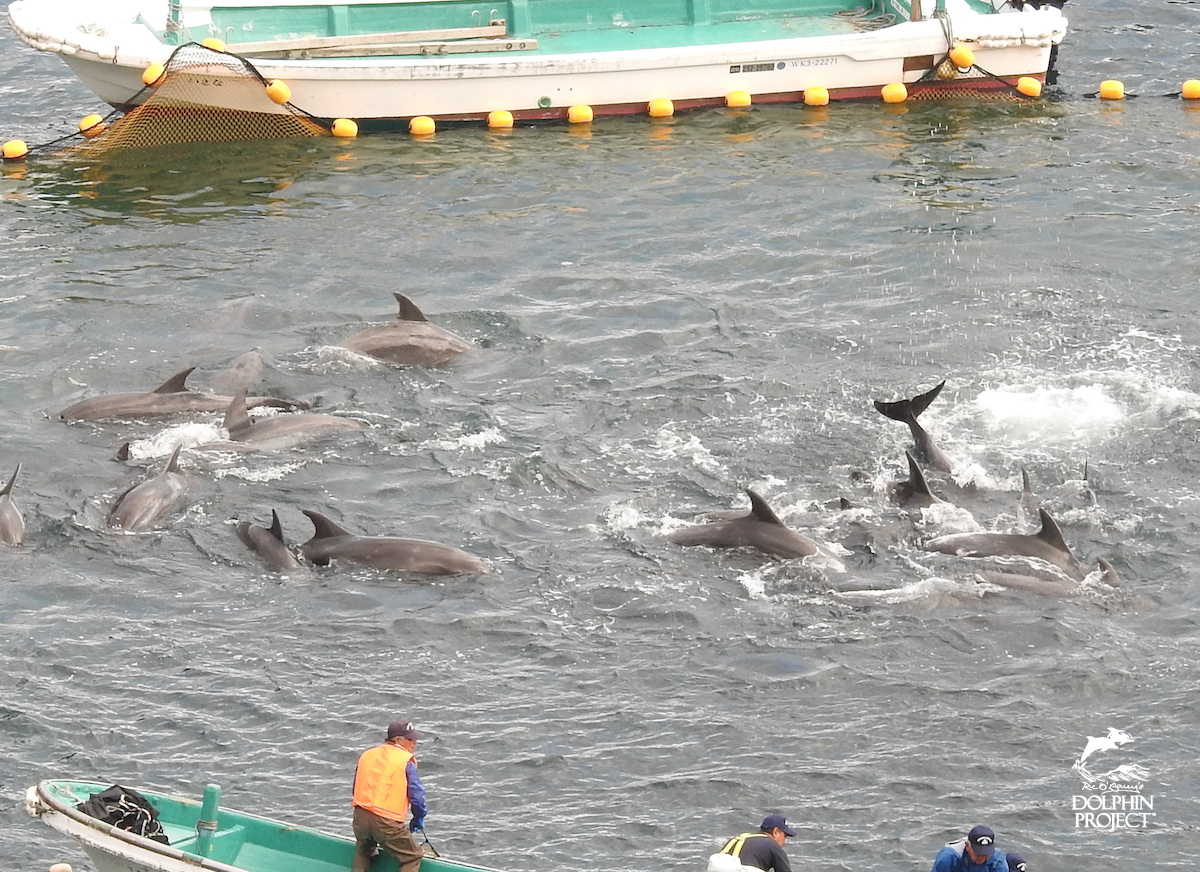 Dolphins swim erratically after being driven into the Cove, Taiji, Japan. Credit: DolphinProject.com 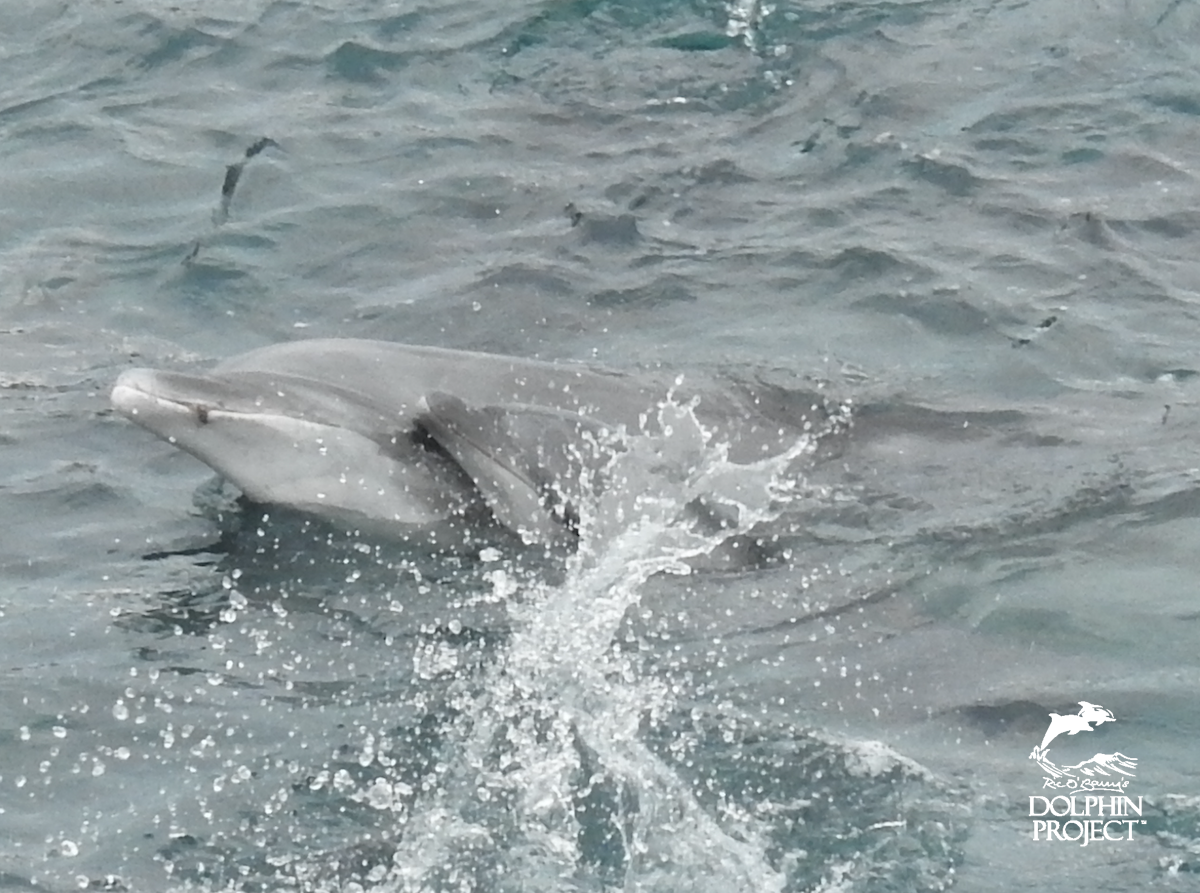 Young calf swims with its mother in the Cove, Taiji, Japan. Credit: DolphinProject.com 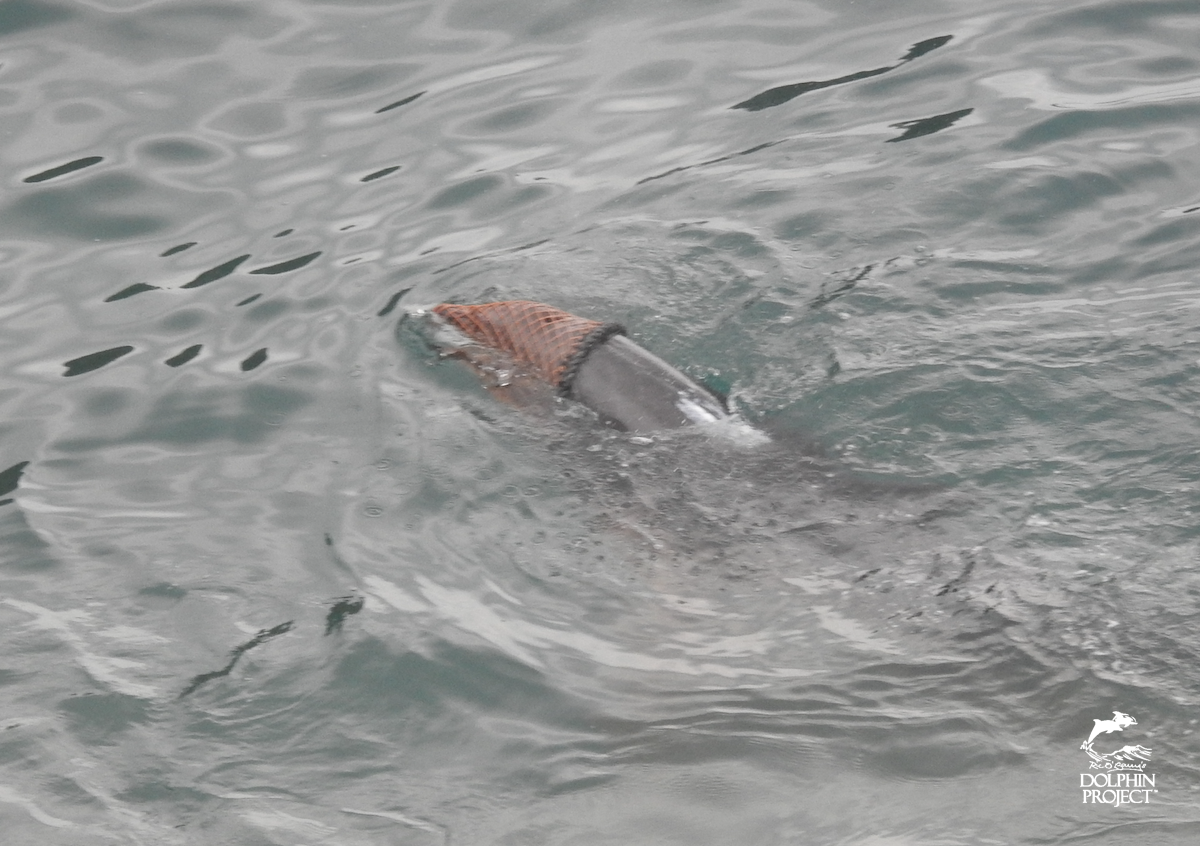 From the lookout I could see the drive formation and a large pod of bottlenose dolphins exploding from the surface in a frantic attempt to flee.  The hunters were herding them towards the Cove using a “wall of sound” created by the engines and banger poles fitted onto their vessels. By 3:00 p.m. this pod was pushed into the Cove and the net was drawn.

The days to follow would prove to be filled with the most disgusting atrocities that one species could ever possibly inflict upon another.

The dolphins were left in the Cove that first night under bright security spotlights. The air was filled with the sounds of panicked tail slaps and exasperated exhalations. They swam in a very tight group that night, so tight that the initial size estimation of this pod was only about 60 individuals. It wasn’t until the captive selection process began that the true size of this pod was revealed. 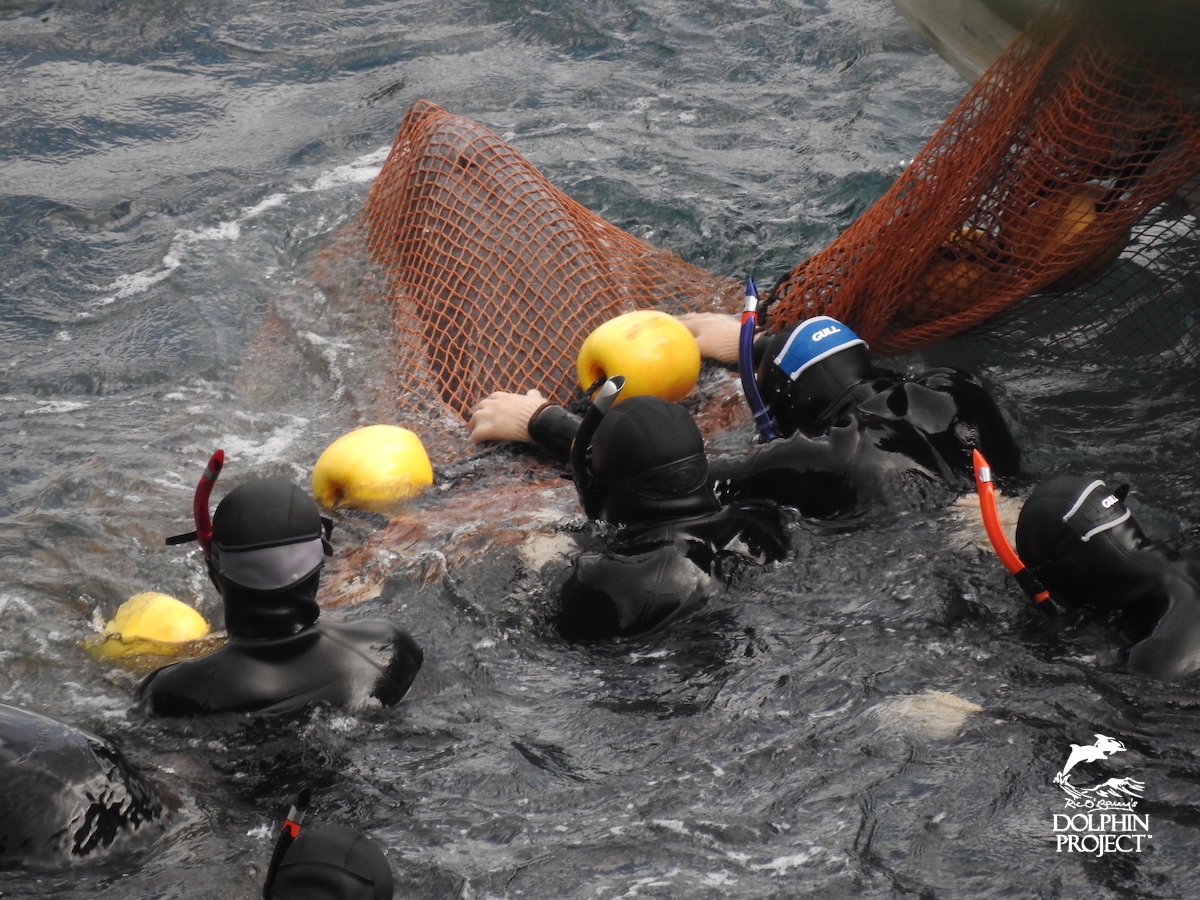 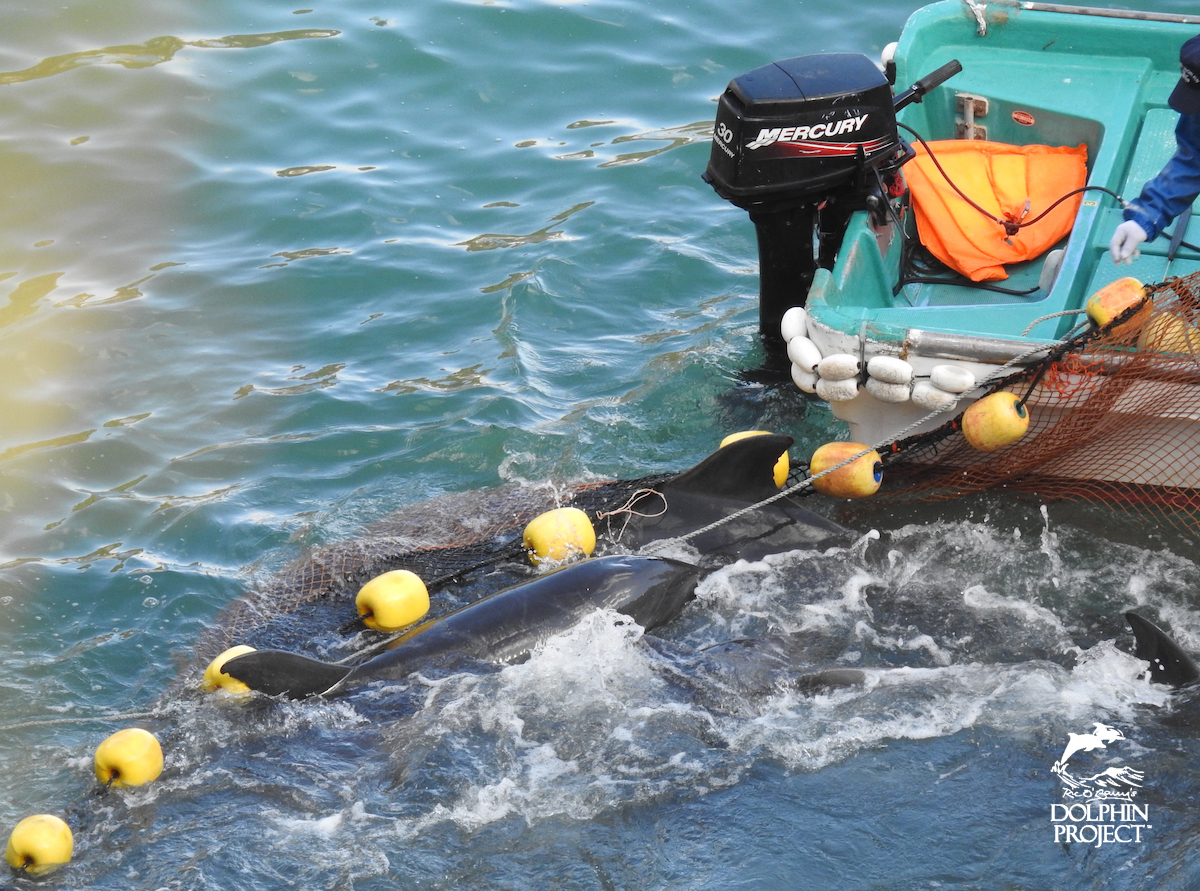 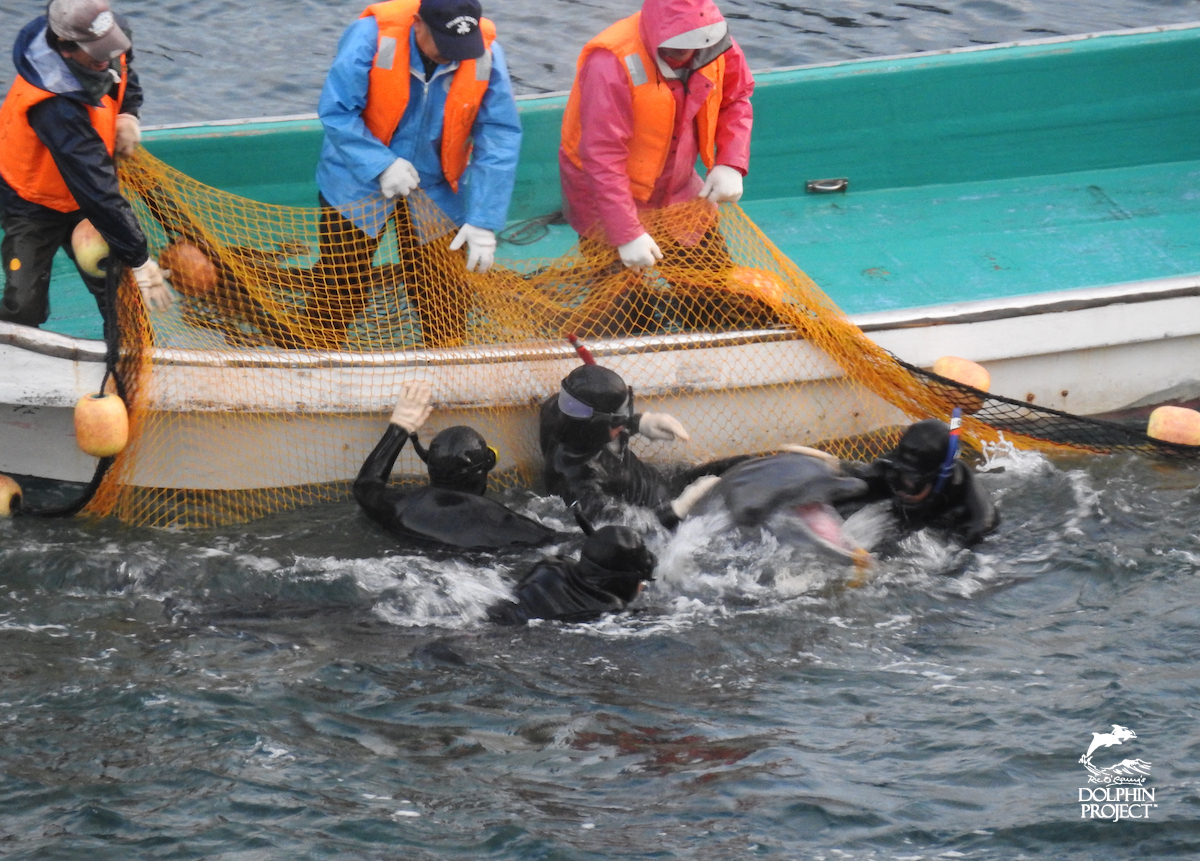 Here is how a wild dolphin goes from sea to stage, Taiji, Japan. Credit: DolphinProject.com

The selection process conducted by the hunters and dolphin trainers was extremely comprehensive and horrendously grueling for the dolphins. Over the next three days the pod was continually split into small groups and each and every individual was aggressively wrestled into a net and driven underneath tarps for thorough physical inspection. Bottlenose dolphins are the most sought after species by the captivity industry and the goal of this hunt was to take every dolphin captive that they could. The selection process lasted up to seven hours each day, and out of the pod of 120, 71 dolphins were stolen from the ocean and forced into a life of captivity. From here on forward these broken souls, unjustly ripped from their home, will be coerced into performing unnatural behaviours in exchange for food while trainers grossly misrepresent them as “ambassadors” to crowds of cheering, misled spectators.

The 71 captives were certainly not the only casualties of this drive hunt. This four-day process was excruciatingly abusive both mentally and physically and although the remaining 50 dolphins were driven back out to sea, they had lost over half of their pod. While technically free, these dolphins suffered physical injury, battering their bodies against skiffs, nets and jagged rocks in an attempt to flee. They also endured extreme psychological damage which will severely hinder them for the rest of their lives, however long they may survive.

There were three documented deaths that occurred as a result of this torture, although the actual number is likely much higher and will continue to grow over the coming days as the pod struggles to overcome the trauma. While each life matters, the most notable death of this ordeal was a tiny calf, only about 3.5 feet long. On day two this little dolphin was brought out from under the tarps and carelessly dumped with the other dolphins deemed unsuitable for captivity. Shortly after, this little one swam forcefully into the net separating it from the rest of the pod and the direction of its mother, who had likely been taken away in a sling. Although the net was impenetrable, this calf, so new to the world, continued to swim into the net with all of its heart and strength – both of which gave out after a little over a minute. Its tiny body sank to the bottom and laid next to the net where it had fought with every ounce of life it had left to make it back to its mother. 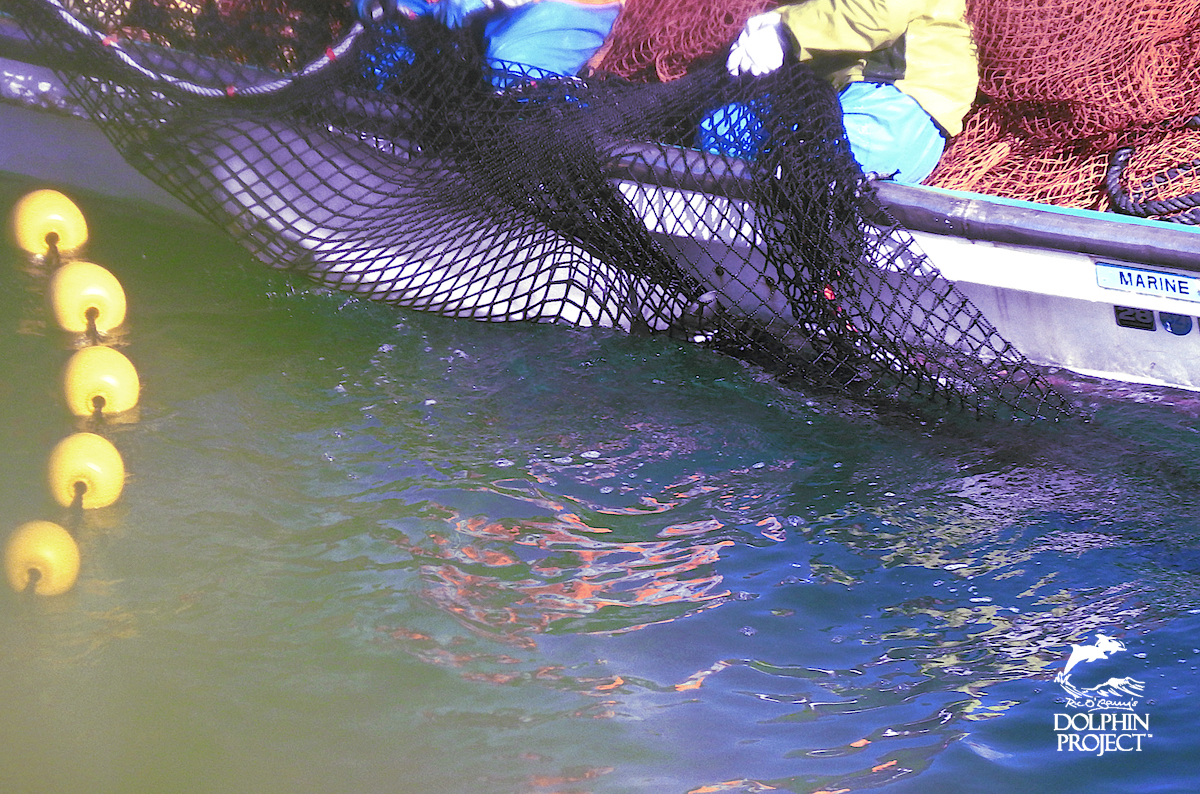 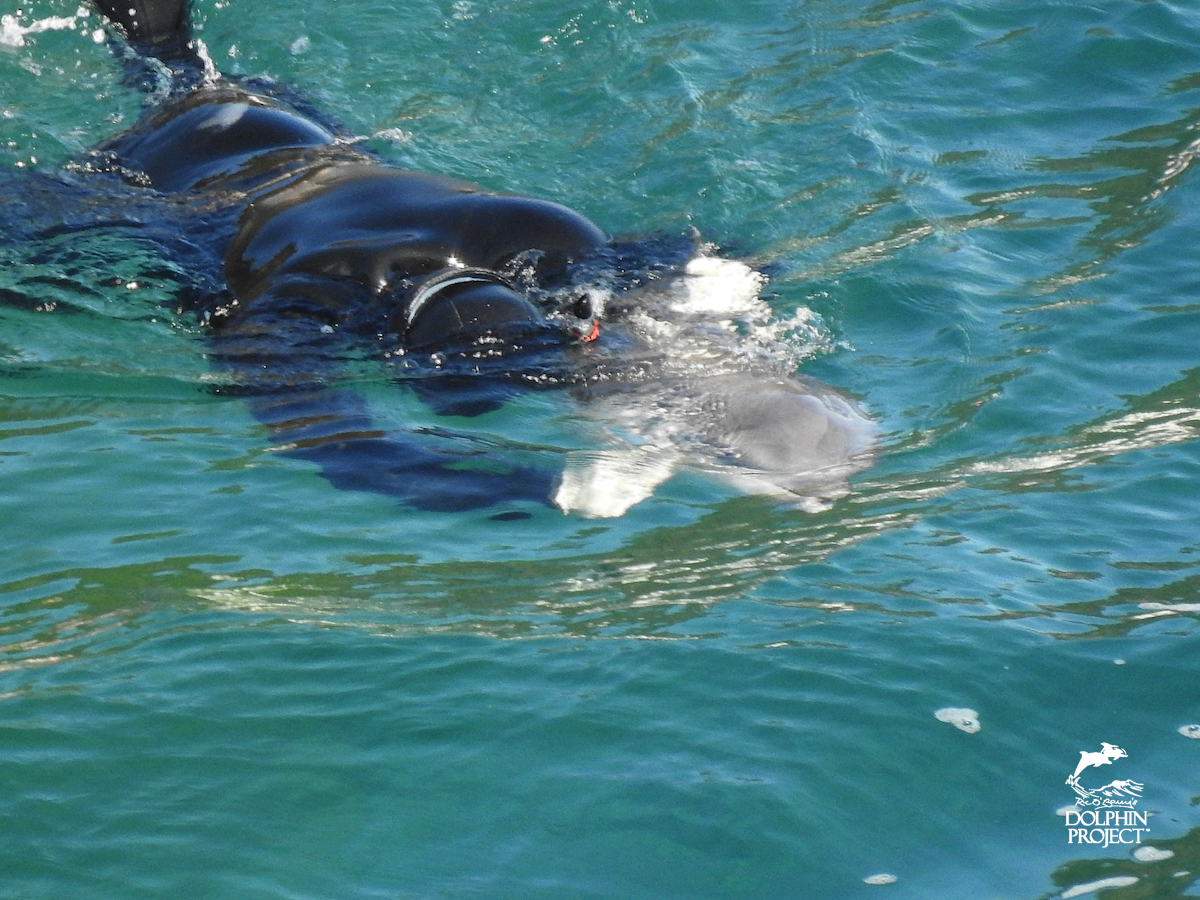 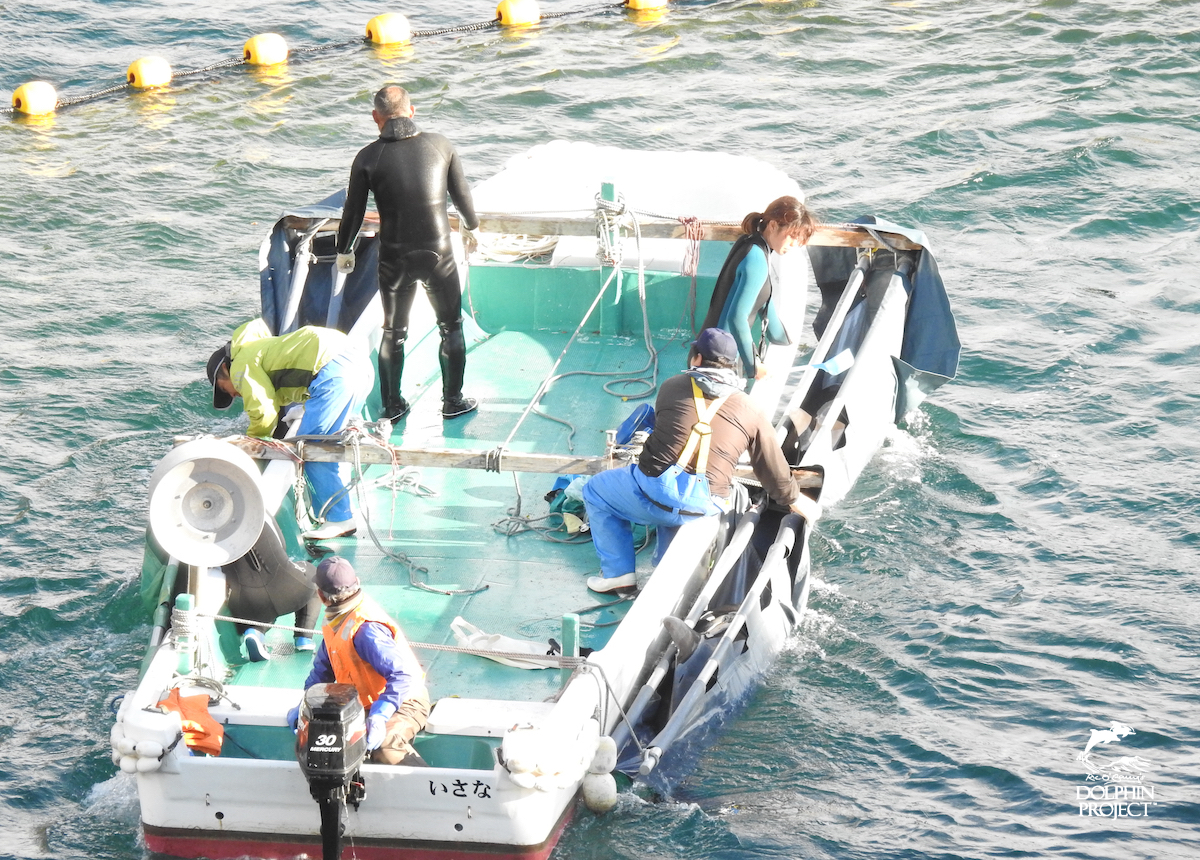 Captured dolphins are loaded into slings and taken to nearby pens, Taiji, Japan. Credit: DolphinProject.com

About 20 minutes later a skiff brought a diver over to retrieve the body off of the ocean floor. Rather than pass the tiny calf onto the skiff, the diver swam its lifeless body the entire distance across the Cove as if it were still alive, holding onto its dorsal fin and tiny pectoral fin which was smaller than his own hand, before finally disappearing back under the tarps.

This dolphin’s life, like so many others, is the true cost of the dolphin show.

We simply cannot comprehend the terror and fear that must have overcome this little calf in its last horrible days on Earth, and its death is completely unacceptable. It is the dolphin captivity industry that is ultimately responsible for the hideous events that took place in the Cove over these four days. As long as this industry exists there will be a never-ending demand for more and more dolphins to replenish the tanks of dolphinariums worldwide. As long as this industry exists, pods will be destroyed, crucial social bonds will be severed, and lives will be lost. The general public must understand and accept that this industry is the financial motivation backing these horrific hunts.

We as a species must decide to raise our moral standards and start respecting dolphins for what they are, rather than what they can do for us. Our fun should never be the cause of another’s suffering. When we realize this and ticket sales drop then dolphinariums around the world will be forced to close their doors. When there is no longer a demand for captive dolphins, then there will no longer be money made in hunting them. Until then, the powerful motivations of profit and greed will continue to decimate the oceans of these amazing animals, which have just as much right to live on this planet as we and all other species do.