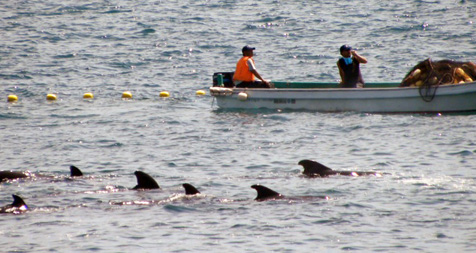 I’m in Tokyo, having left Taiji earlier today, thereby missing the first hunt of the season, which resulted in a catch of 20-24 pilot whales, still milling in the Cove waiting, presumably, for representatives of the captive industry to show up.

UPDATE:  According to our Cove Monitors, the pilot whale pod was herded into the notorious Cove on Friday and kept overnight.  (Usually these days, the hunters do not keep dolphins overnight in the Cove unless they want to keep them for dolphin traffickers.)  On Saturday, three pilot whales were taken for captive purposes from the pod.   The rest were slaughtered in the Cove for meat on Sunday.  Pilot whale meat contains some of the highest levels of mercury and other pollutants recorded in the Taiji dolphin species that have been tested.

On Monday, two pods of bottlenose dolphins were located and corralled — some offshore in nets and others in the Cove.  Once again, the trade in Blood Dolphin$ will take place over the next few days.

Our volunteer videographer today was Melissa Thompson Esaia, who came to Taiji with us for the first time and has been training to be a Cove monitor.  She shot this footage of the drive hunt and incarceration of pilot whales behind the nets in Taiji:

The multiple nets not only keep the pilot whales in, but also keep people out, who might be tempted to try cutting the nets at night.

In the past, a pod of dolphins was usually left overnight in the Cove before slaughter the next morning, as depicted in The Cove documentary.  The Taiji dolphin hunters have changed all that, now killing the pods as soon as they can in the Cove.

However, if the pod of dolphins is to be used for captivity (e.g. if there are orders from aquariums for a particular species, such as the pilot whales now in the Cove), then the dolphin hunters keep the dolphins in the Cove so the captive industry can send its representatives to check out the pod, looking for “show quality” animals — usually females (more tractable than males in captivity) with few blemishes or scars.  That is apparently what is happening with these pilot whales, which are not really whales, but large dolphins.

It is an awful feeling for our Taiji Cove Monitors to go to sleep knowing they will witness chaos and live captures and likely bloody death the Cove the next morning.  I feel for all of them.

My thanks to Becca, Arielle, Terran and Melissa for volunteering and training for being Cove Monitors now at the beginning of the season.

The terror of the dolphin hunting season for 2012-13 has begun.  We must put an end to it!