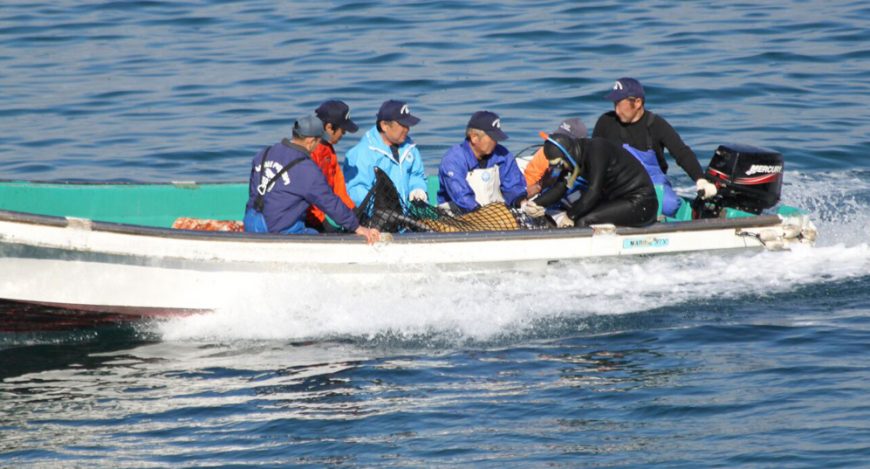 At 6:40 a.m., the sun peaked over the horizon, and 12 boats left Taiji harbor in search for dolphins. We all hoped for a day of blue and a break from the horrors of last week. When the first and second boats returned empty-handed, it seemed like the dolphins would swim free today. Unfortunately, this was not the case.

Approximately 11:30 a.m., five hours after the hunt first began, a drive formation became visible on the horizon. Ten boats slowly moved the pod of dolphins closer to shore, and splashes could be seen from one end of the formation to the other. It was either a very large pod, or the dolphins had spread themselves out.

By the time the boats approached our lookout, it appeared that only half a dozen remained, and we identified them as Pacific white-sided dolphins. This would mark the first drive of the season for this species. Typically, as these dolphins are highly sought after for dolphinariums, they are not driven into the cove. Much like striped dolphins, they panic in the confines of shallow water, and injured animals don’t yield the types of profit as “pretty” ones do. Thus, hunters have adopted the practice of netting the dolphins offshore and sending divers into the water to retrieve them.

By 12:30 p.m. the large banger boats had encircled the dolphins with a net outside of the harbor, divers were in the water, and skiffs were laying more nets to tighten the space – enabling the divers to physically catch each dolphin. One by one, the dolphins were wrapped in a net and hoisted into a skiff containing both hunters and dolphin trainers from the Taiji Whale Museum. Each dolphin thrashed violently in the bottom of the skiff as they were taken the short distance to the harbor pens.

The rough, careless manhandling of the dolphins continued, as they were lifted out of the skiffs and thrown into sea pens. Dumped like garbage. Trainers stood and watched the dolphins for a few moments, then left.

Four dolphins lost their freedom today, stolen from the ocean, all for profit and “entertainment.” This is where it begins, not during the actual show. There is nothing entertaining about stolen freedom.

Please help us spread the word. Together, we can end this.

HOW YOU CAN HELP:

Featured image: What captivity looks like – wrapped in nets and stolen from the ocean.
Photo credit: Dolphin Project