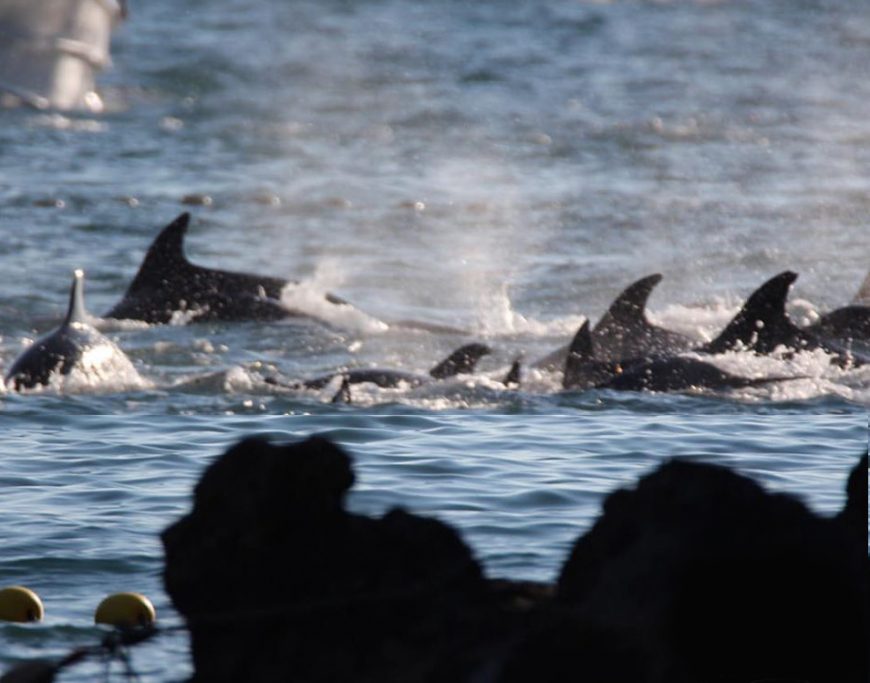 Day Two – September 20, 2015, Taiji: The pod was held overnight, already fractured by the absence of 18 members. As dawn broke, skiff after skiff filled with divers approached the dolphins, netting and re-netting the area in attempts to select the desired animals. And, for hour after hour, this is exactly what happened. Much like one would inspect produce in a grocery store, the dolphins were inspected, manhandled, often turned upside down, some caught in nets while others, bloodied.

In the end, approximately 50 dolphins were “chosen” for a life of captivity, with the remaining animals – around 30 in total – released back to the open ocean. Babies were separated, then reunited with their mothers.

Take the pledge not to buy a ticket to a dolphin show.

Ric O’Barry has been going to Taiji for the past 13 years, multiple times per season and has seen his share of cruelty. He had this to say about the hunters/killers:

What the hunters are doing in Taiji violates an ancient friendship cultivated by time, between man and dolphin.” ~ Ric O’Barry Day One – September 19, 2015, Taiji: A pod of bottlenose dolphins that – moments earlier – was swimming free in the open ocean, has been captured in Taiji, Japan. In the first capture of the 2015-2016 drive season, a pod of approximately 75-80 dolphins were quickly spotted, and soon after, pushed and netted into the cove. Four nets, three close to the shore and one further offshore were strung, to ensure the dolphins did not attempt to escape as did a solitary Risso’s dolphin during the first slaughter of the season.

Dolphin Project was on the ground, live streaming the violent capture, documenting the terrified dolphins’ vocalizations and tail slapping as their access to freedom was sealed off. At least one dolphin was caught in the nets, which we were able to photograph. Two animals were also seen having bloody dorsal fins. “Much of the violence comes from the drive itself, where some dolphins don’t even make it to the cove. The drives are so stressful on dolphins that pregnant females in the process of a drive can abort their calves and young ones can’t always keep up the fast pace.” ~ Ric O’Barry

Much of the pod appeared to be comprised of juveniles, with at least three babies seen.

There are more than 150 orders placed for live dolphins from Taiji, according to the Taiji Fishermen’s Union. The majority of these mammals, approximately 70%, are destined to be shipped to China. In spring of this year, Ric O’Barry and Hans Peter Roth were invited to Beijing to launch their book, The Cove, (Dolphin Bay) by Zhonghua Book Company.

“When dolphins are successfully “driven” into the cove, they become property of the Taiji Fisherman’s Union.” ~ Dolphin Project Veteran Cove Monitor Terran Baylor

In addition to live captures, the 2015/2016 drive fisheries (kill) quota has been set at 1,873 mammals, comprising seven species of cetaceans. By the end of the day, several hours after the initial capture, a total of 18 dolphins were taken from the pod. Nine skiffs, each carrying two dolphins, took the mammals to the harbor pens and Dolphin Base, the latter a facility on the north side of Taiji which trains both dolphins and trainers, as well as allows public interaction with the animals. Their final destination? Unknown.

Approximately 60 dolphins remain in the cove, where they will be held overnight. They will not be fed. Their fate also remains a mystery. No matter what the outcome, the pod has been irrevocably ravaged.