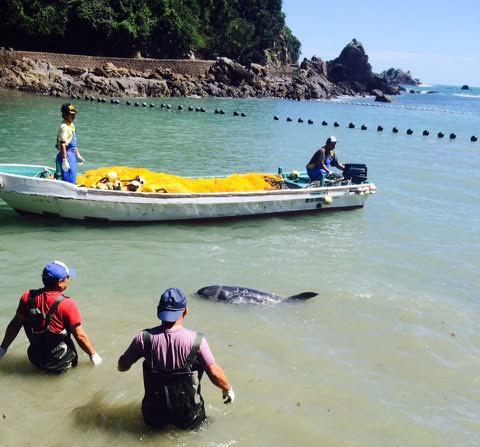 It’s been 11 days since the start of the dolphin drive season in Taiji, Japan and we’ve all enjoyed the blissfully blue days. That came to an abrupt end today when a pod of around 12 Risso’s dolphins were driven into the killing cove and slaughtered. 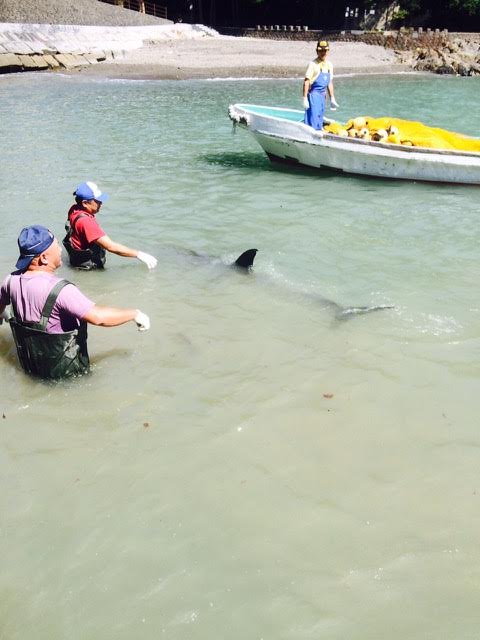 Fishermen attempt to push a female Risso’s dolphin back into deeper water after she stranded herself when trying to escape. Photo: DolphinProject.com

Ric O’Barry and his Cove Monitors observed seven boats in drive formation pushing a pod at around 8:20 a.m. Japanese time. Three hours later, they had reached the mouth of the cove and the exhausted and panic-stricken Risso’s were sealed off from the open ocean.

In desperation, the pod attempted to flee towards the beach, actually swimming under the nets to escape. As Ric and his crew stood on the shoreline, a female Risso’s dolphin beached itself in front of them, just a few feet away from where Ric was standing. 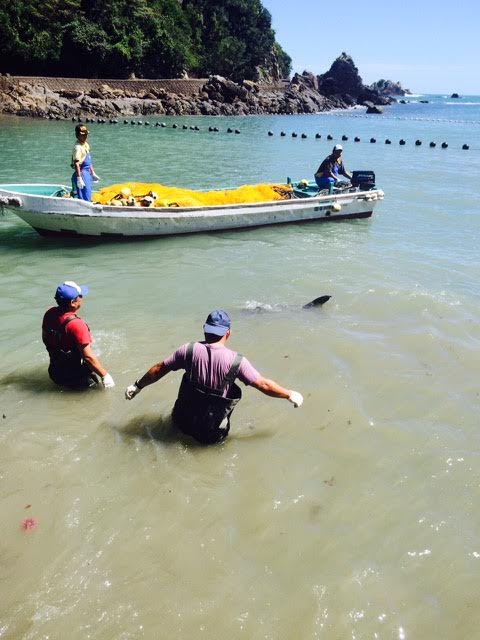 Despite efforts to return this female Risso’s dolphin to deeper water, she died from the stress of the drive. Photo: DolphinProject.com

“She was so near,” said Ric, “banging her head against the rocks and thrashing around.” It was already too late for the dolphin, suffering from capture myopathy (essentially shock) from the long drive, the fishermen’s efforts to push her back to deeper water proved futile, and she died shortly afterwards.

“The violence comes from the drive itself,” Ric explained, “where some dolphins don’t even make it to the cove.” The drives are so stressful on dolphins that pregnant females in the process of a drive can abort their calves and young ones can’t always keep up the fast pace. They are lost at sea, unknown and unaccounted for.

While no studies exist about the effects on cetaceans that survive the capture process in Taiji, there are studies on dolphins caught as incidental bycatch by commercial fisheries in tuna nets.

The terror these dolphins endure is obvious. The female dolphin never made it into the killing cove to be slaughtered with the rest of her family, she died from the inhumane drive process itself.

“This was the closest I have ever come to jumping in the water,” Ric said. But it was a split decision with immeasurable consequences. “It’s one strike and you’re out,” he added. “Had we jumped in, we’d have been arrested immediately for conspiracy to disrupt commerce. Our video, computers, cameras — everything would have been confiscated.” “The level of cruelty here is breathtaking. And sometimes I need to be alone.” Ric O’Barry after witnessing the brutal dolphin slaughter
Photo: DolphinProject.com

The dolphin advocate’s recent arrest proves that tensions are running higher than normal in Taiji. Even the Japanese media appear to be on constant standby, having already played a direct role in Ric’s incarceration. “Their story is already written,” he told me, “it’s whatever the Mayor tells them it is.”