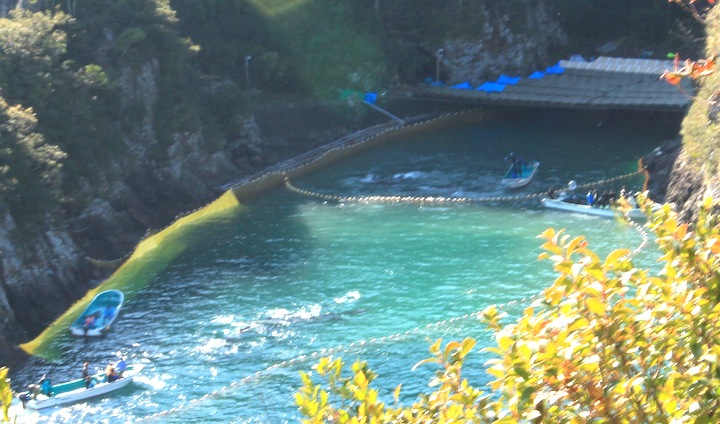 Note:  Our Japan Cove Captain, Sakura Araki, arrived in Taiji on Christmas Day, and reported that the Taiji dolphin hunters had shut down activities for the holiday, coming back to work in early January.  Our volunteer Cove Monitor Yoav Ben-Shushan was in Taiji the week before that, witnessing a massive round up of wild bottlenose dolphins for captivity and slaughter.  Here is his report.  – Ric O’Barry

I’m convinced that photography together with social media is a vehicle for political, social and environmental change.  I believe in the power of images to shape public attitudes and to raise awareness on issues that are generally absent from public discourse.  Therefore, being a cove monitor in Taiji is all about showing people around the world how greed and immoral activities run the bloody business in the town of Taiji, Japan, through photography and using social media. The corruption in Taiji happens while dolphin trainers from IMATA (International Marin Animals Trainer Association) and WAZA (World Association of Zoos and Aquariums) are working together with Taiji’s Fishermen’s Union. These organizations are both there in the killing Cove with the dolphin hunters. They are there buying these dolphins as live captives, and they are one of the main reasons for the dolphin drive. Pure greed and ignorance is the only reason that this atrocity continues to happen. The locals for centuries have been (and still are) dependent on the ocean for food, but the slaughter of dolphins and pilot whales have nothing to do with the need for food.  This industry has nothing to do with eating dolphin meat as part of their culture; most Japanese don’t eat dolphin meat. Greed is the motivation for Taiji’s Fishermen’s Union.  For them, these mammals are not dolphins; these are floating dollar bills (or yen). Ignorance is the reason for the fishermen’s belief that dolphins and whales are food competitors.  Dolphins eat fish, and therefore, the fishermen justify hunting the dolphins to eliminate the competition for fish. For the past week I’ve been witnessing a super pod of more than 200 bottlenose dolphins being hunted down, held behind nets in the killing cove for five nights and six days, frightened and starving for food.  The selection process for captivity took six days. They were divided into small groups, young separated from older, while witnessing the marine mammal trade industry steal their babies.  It was hard to watch the rest of the pod hop with their heads out trying to understand what was going on.  Their young wrestled by divers (at least 2 died during this process), others tangled in nets and injured by the propellers of the hunters skiffs as they herd them towards where they are inspected by trainers.

Bottlenose dolphins in the Cove in Taiji, Japan.  Photo by Yoav Ben-Shushan. The total of young bottlenose dolphins from this pod taken to sell to marine theme parks around the world was 101 dolphins.  On top of it all, 25 were slaughtered for their meat.  When the nets finally came down there was a whole generation stolen from nature.  Those who were released were too old for captivity.  It was an amazing moment to watch the dolphins fleeing for their lives in such a frenzy trying to get away from hell.  The next day the Taiji dolphin hunters took the day off from work. They had lots of money to count.  Millions of yen… A trained dolphin can be sold for $50,000 to $150,000. I truly believe that the ones killed under the tarps were the lucky ones.  That may sound harsh, but being a captive dolphin is worse than death.  The Taiji captive industry crams them into the sea pens in the harbor, smaller than swimming pools, tightly together, and the dolphins just swim round and round.  With no hope of release, I think about it as life without parole for being cute.

Dolphin training in the Taiji harbor sea pens.  Photo by Yoav Ben-Shushan. This entire nightmare business is happening so people can buy a ticket and take their kids to a dolphin show to watch them doing stupid tricks they would never do when they are free.  Free dolphins don’t put on funny hats or jump through hoops.  They do it in captivity because they are hungry.  They have been forced to learn to do it so they can receive food.   They are all kept hungry so that they will cooperate with the trainers.  The training process is another horrible story of brutality. It is clear that the capture of dolphins will only end when there is no more market or demand for a dolphin show.  It is that simple.  It is supply and demand. Dolphins are like international citizens: they have no borders; they are roaming in the open sea, and they should be left there.  WAZA, IMATA and the Japanese Fishermen’s Union have no legal right to profit from captive dolphins, and our job is to stop them by helping educate people and asking people to not buy a ticket to see captive marine mammals, whether it be in a show, a petting pool, or a swim-with-dolphins program.

Dolphin meat from recent Taiji hunt, likely from striped dolphins.  Photo by Sakura Araki. Don’t be silent about this. Please write, call, fax, email and tell the industry what you think of buying captive dolphins from the dolphin drive hunts in Taiji. As Ric O’Barry says: “The dolphin smile is nature’s greatest deception.  It creates the illusion that they’re always happy.  I think this multi-billion dollar captivity industry is built on that optical illusion.” Help spread the word………for the dolphins!