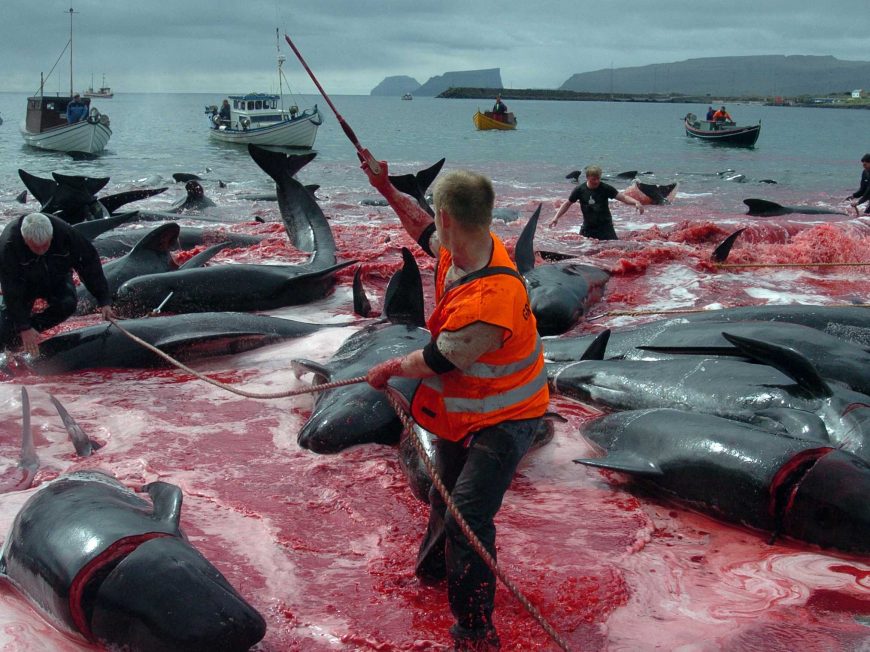 New hope for pilot whales, or a political move aimed at silencing criticism?

The Minister of Fisheries in the Faroe Islands, Jacob Vestergaard, has proposed a new rule that affects Faroese pilot whale hunters: In order to participate in the island’s traditional whale slaughter – called grindadráp in Faroese – they must first undergo training in proper killing techniques. If Vestergaard’s proposal is accepted, whale hunters will then have to carry a license to participate in the hunts starting May 1, 2015. The whale slaughter, that dates back to when Viking settlers arrived on this archipelago of 18 islands halfway between Iceland and Norway, continues in the Faroe Islands even after Faroese health authorities in 2008 warned against consumption. The chief physician for the Faroese Department of Occupational Medicine and Public Health, Pál Weihe, and the islands’ chief medical officer, Høgni Debes Joensen, warned that pilot whales are contaminated with high levels of mercury and polychlorinated biphenyls (PCBs), as well as DDE, a breakdown product of the insecticide DDT. Consumption has been linked to Parkinson’s disease in adults, impaired immunity in children, and compromised fetal development. The physicians recommended that pilot whale meat shouldn’t be consumed by humans. Whale meat consumption has gone down considerably since then, but the slaughter, in which entire schools of whales are wiped out at a time, has continued.

The fisheries minister’s proposed rule could be a politically motivated move aimed at silencing mounting international condemnation by setting forth the argument that the slaughter is now being conducted by people who possess expert knowledge about proper killing procedures.

Vestergaard´s proposal will implement changes to the way pilot whales are killed. The sóknarongul – a heavy iron hook attached to a rope with which live pilot whales are hauled ashore – is to be replaced by the blástrarongul, a blunt hook that is used to drag the whales ashore by their blowholes. The proposal is to allow the sóknarongul and the traditional whaling knife to continue to be used under special circumstances, but only with a special permit from the foreman of the grindadráp or the local police chief. Among the tools still allowed in the hunt is the mønustingari – a lance used to sever the whales’ spinal cords. According to online sources, the Pilot Whalers’ Association has agreed to most of the proposed changes.

photo by gregoniemeyer, on Flickr | Creative CommonsPosing for the family album in front of the day’s catch of whale and dolphin, a young Faroese boy learns
to appreciate the tradition of whale hunting early on.

Faroese conservationist Rúni Nielsen, who has never killed a pilot whale and has spoken out against the slaughter for several years, is hopeful that the new legislation will lead to the end of pilot whaling. “Many people won’t bother to receive the training and will be eliminated from the slaughter for that reason. The slaughter will lose its appeal to many, and its role as a Faroese tradition will lessen,” Nielsen says. He notes that the changes to killing methods could reflect an effort to prevent a repetition of a particularly brutal whale hunt in Klaksvík in 2010.

During a visit to the Faroe Islands last year, I heard several accounts of that hunt. One whale hunter stated that the pilot whales were trapped in such deep water that they had to be hauled ashore with iron hooks. “It took many attempts at securing the hooks in their flesh,” he said. Another hunter reported that the pilot whales, once they had been secured for slaughter, were cut with knives by people who had no idea how to kill a whale. “It took the whales a long time to die, and there were more than two hundred of them,” he said.

Although changes to Faroese whaling rules could prevent such a disaster from happening again, the suffering of pilot whales is far from over. They will still be captured by the hundreds, forced to strand in shallow water and face agonizing butchery. During the hunt and subsequent slaughter, the highly social animals remain together, and all members of the school are killed, including pregnant and lactating females and their offspring. What is not clear is why the Faroese government allows the whale slaughter to continue, knowing that it supplies households with meat and blubber containing some of the world’s most dangerous toxins.

photo by gregoniemeyer, on Flickr | Creative CommonsThe whales are on the shore, the men are on the water. This hunt yielded about 100 whales.

In interviews with whale hunters in 2011 and 2012, it became obvious that the drama and excitement of the slaughter is the primary motivator for keeping it going. (Read my earlier report, “Heart of Darkness,” that explains this in detail.) Some whale hunters claimed that the hunt provides a welcome break from the routines of modern life, bringing back memories of a time when a man’s value was measured by his ability to provide for his family. Others reported that participating in the whale hunt is what makes them feel truly Faroese. Which is why I wonder if the true purpose of the “license to kill” proposal is to prolong the existence of the slaughter by making it appear less brutal to onlookers.

It has been five years since Faroese physicians warned against consumption, citing risks of irreversible health damage. Now is not the time for the Faroese government to encourage the establishment of an elites-type team of trained whale hunters. It is time for them to finally abolish a whale slaughter that is cruel, unnecessary and poses a danger to human health.