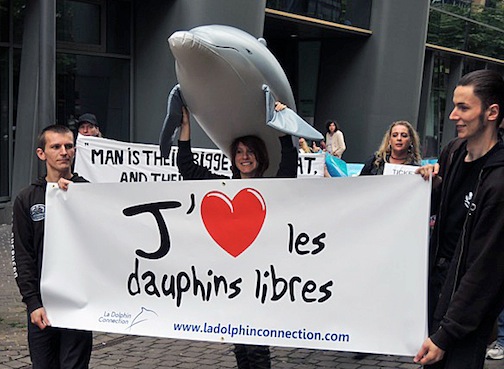 More than 300 people traveled by train, plane, and car from the United Kingdom, Spain, Germany, Holland, Greece, Italy, and other parts of Europe to come to Brussels to participate in the first ever demonstration against ALL dolphinariums in the European Union.  It was a great time for all, and I am so glad I did not miss it!

In Belgium, home of the EU, protesters (both two-footed and four-footed) march to keep dolphins free.  Photos by Midori Takahashi.

There are approximately 285 cetaceans being held in 34 dolphinariums in the EU. They are all bad for dolphins and bad for people, especially children.

Ric O’Barry sounds off for the dolphins in Brussels, headquarters of the European Union.  Photos by Midori Takahashi.

They’ve posted a petition urging an end to all dolphinariums in the EU.

“This is a tough fight,” Yvon summed up, “because we are dealing with a huge animal leisure industry that has incredible financial resources, able to influence any political or media organization.  But it is a RIGHT and ETHICAL fight, not only for dolphins but also for the future of our children.  Our humanity is involved in this battle – a battle that we will win!”

Tia Butt, our Cove Monitor from London, came over to join us.  Photo by Ric O’Barry.

Our friend Tia Butt, who has been a Cove Monitor in Taiji for Ric O’Barry’s Dolphin Project for several years now and joined us from London, agreed:  “ It was a great experience to be involved with this, and I was proud to be there with Ric and to make a stand for the dolphins of Europe.”

Midori Takahashi is living in Belgium and joined us, too, one of many Japanese people who are becoming active to protect dolphins.  “My overall impression of the demo was very positive – peaceful and nice,” Midori says.  “As you can see in my pictures, everybody was smiling and being very friendly to each other.  I know that Yvon Godefroid was very happy to have had such a successful demonstration, and so many supporters had joined from all over the world.”

Together we marched in front of the EU office of the Minister of Public Health, which includes responsibility for animal welfare.  Maria Heidemann, another activists who has joined me in Taiji, was there walking on stilts above the crowd.  Many people brought their children along, too.

Three of us (French, Flemish, and English speaking) were invited to meet with Dr. Eric Van Tilburgh, head of Federal Public Health for zoos and Belgium dolphinariums. We were assured by the staff that the government was “sensitive to public opinion” and our concerns were “being taken seriously.”

The meeting lasted more than an hour and a great deal was discussed. We talked about Boudewijn Seapark, the last dolphinarium in Belgium that is still operating without a license.  We were told that the dolphinarium would be investigated ASAP. Our colleagues in Brussels will follow up next week to see if this is happening.

Many people, many signs and banners.  Photos by Midori Takahashi.

Tia told me:  “You and Yvon and Annelies, the organizers of the demo, were invited to speak to Dr. Van Tilburgh, the head of the animal welfare committee in Belgium and who is also involved with  the EU, to speak with him about the cruelty of captivity for cetaceans.  I was impressed that you were in his office for an hour, which was very encouraging, and while you were in there, all us activists were making a lot of noise for the dolphins outside the office where this meeting was being held, which must have had a good impact!”

Yvon added: “Dr. Van Tilburg is committed to convey our demands to the Minister in charge, Ms. Laurette Onkelinx, recalling that a special commission would soon deliver its conclusions about standards for welfare improvement of the Bruges dolphinarium.  Our answer was that whatever the findings of the Commission, it would be the voice of the streets and the citizens who will ultimately prevail.  No aquatic jail could ever be improved to the point you can allow captive cetaceans to flourish as they do free in the ocean.”

1. Ban the import of dolphins and whales into the European Union.

2. Ban the construction of new dolphinariums in the European Union.

3. Ban captive breeding of dolphins and other whales and see that the existing dolphinariums conduct research in birth control for captives.

“It’s been advised by Dr. Van Tilburgh,” Tia explained, “that a petition must be signed by 1 million people to support the fact that people do not want to see cetaceans in captivity in Europe.”

So please sign the petition urging an end to all dolphinariums in the EU.