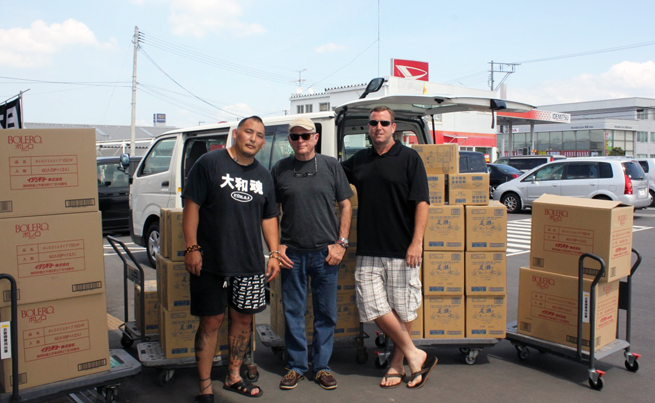 Late last year I began following a Japanese “activist” named Enson Inoue.   I use the label “activist” carefully, as activist in Japan means something entirely different than it does to the rest of the world.   Enson is a very famous mixed-martial arts star in Japan, but he also has a heart of gold.

After the earthquake and tsunami seriously damaged a series of nuclear power plants in March 2011, Enson headed to the Fukushima area to find some of his friends.   One of these friends was a man named Mashiko.   After Enson found that his friend was safe, he realized that there were a lot of people in need in what has been deemed “the infected area.”   Japan is a culture of very proud people.  You would not see a lot of people asking for help.  So to take notice of someone else’s needs and offer help is an extraordinary feat.

I was following Enson through social media sites and English articles on the Internet.   I contacted Enson in January while I was in Japan with an idea to come back later in the year with some funds to help the victims of 3/11.   After many conversations, he offered to go with us and show us around to help ensure the supplies get to the right people.  As soon as it was settled, I immediately contacted Ric O’Barry and told him of our plans to go in September.   Without even thinking about it, Ric responded, “Tim, I’d really like to go with you and see if there is anything we can do to help”.  And so our first trip to Fukushima was planned.

We headed to Tokyo in mid-September, rented a cargo van and pointed north.  We brought with us a Geiger counter to check on radiation levels we might encounter.  We left early in the morning with the plan of meeting Enson and Mashiko around noon.   Now Enson is not hard to find in a country of very compact sized white and silver cars.   His black Hummer could be seen easily amongst the hundreds of cars on the street.

Enson got out of the car, and I quickly noticed, in this my first encounter, that he is a tough looking guy.   He is after all an MMA star, and has the look of one.  As he approached he welcomed us to Fukushima, and we couldn’t help but feel his compassionate demeanor.  After some quick greetings Enson was eager to get to the store to buy the remaining supplies.   Enson’s Hummer was 100% stuffed with water, toiletry kits and bags of rice.  We loaded our van up with the remaining water and tissues.   To my surprise, we drove back into town and within five minutes were at our destination.   Now in my mind I had thought we were heading to a rural area that would be hard to get to.   I asked Enson and Mashiko if this was the right spot, and they told us about how most of these people had come to this camp seeking refuge, because their homes are gone, swept away by the massive tidal wave.  Farms and homes no longer exist, and many of their families have not been accounted for.

Ric reached into the Hummer, grabbed a case of bottled water, and headed down the aisle of pre-manufactured rooms with Enson and Mashiko right behind him.  Enson has developed a system of knocking on the sliders as he walked down the aisle, and we followed.   A head would pop out, and Enson and Mashiko would greet them and place water, rice and the toiletry items inside their door.

This went on for hours.  Now for me, this was exhausting.  I had just climbed Mount Fuji a few days before with my wife Carrie and our friends Becca and Victoria.  Fuji took everything I had.  I was not nearly recovered from it, but here was Ric, Enson and Mashiko running up and down these rows of pre-fabs.   I could not bring myself to complain about being tired.   It was 98 degrees, but these people needed help.

I have never experienced such gratitude from anyone I ever tried to help before.  After about 30 minutes of running back and fourth, an elderly lady walked up to us with four bottles of an energy drink.  She told Enson we needed to keep our energy up so we could get the supplies to the other people.  I felt really odd taking something from her – after all, we are here to lend her a hand, not have a hand held out to us.   We all took the drinks and powered up for round two.

Often we would stick our heads through the slider and see several families living in one unit.  Bedding spread out from wall to wall as 5-6 people were occupying the space meant for two.   We relocated our cars to a more central location.  Sweaty and tired, we rested for a moment as Enson got us some water from a vending machine.   As he put the money in, the machine sang a tune.   I asked Enson what the song was saying?  He smiled and said the vending machine said “don’t give up on Fukushima.”

I thought about that for a long time.  Here is a community of elderly and impaired people, who are now being charged rent for their box, with the government trying to “encourage” them to get back on their feet, and the soda machine sings to them to not give up.   Seemed off to me.   A house is important, but what no one seems to be thinking about is that these people have no one anymore.  Most are elderly and are not looking for a new career to get back on their feet.  Most lost their farms, homes, and businesses that they spent their lives developing.  It felt even more important that we continue now providing them with just a few basics.

After several hours, and many gallons of sweat, we did it.  We handed out all the supplies.  By now the very shy reserved community was standing around us smiling and thanking us.  Another astonishing moment happened next.  An elderly lady living in the community with her grandson walked up to Enson and asked him to give us these two peaches.   She had bought three, but was going to share one with her grandson as a treat.   The other two were for Ric and I.   What was so astonishing to both Ric and I was that peaches are like gold in Japan.  One peach might cost as much as $6 or $7 US.  But she wanted us to have them to thank us for helping her and her neighbors.  Enson helped to translate, and we thanked her for her generosity.

Enson, Mashiko, Ric and I stood there for a few minuets trying to catch our breath and reflect on all that had just happened.   Ric looked up and said, “I will never complain about how small my house is again.  We should all be more appreciative of what we have and be more giving.  No one deserves to go through this.   One natural disaster, and it may be you or I.”   Words I will always remember.   Words we have all shared since this trip.

This day was one of the most amazing and sad days I can remember.  I was able to be a part of three amazing men putting down cultural differences to help the nearly 5,000 residents that are still uprooted in northern Japan.   In March 2011 (called 3/11 throughout Japan), nearly 16,000 people died – brothers, sisters, mothers, fathers, aunts and uncles.  No goodbyes, or last hugs.  Just gone.

It took me a little while to write this blog because of how strongly going to Fukushima affected me.  There are several faces I will never forget.  A lady bowing profusely after we placed a bag of water and rice on her neighbor’s porch because she was frantic they would miss out because the neighbor and her kids were out looking for work while we came by.   A blind man who we did not realize was blind until we had begun to walk away, and he started feeling around his porch for the items we had left.   Never once saying something like: “Hey I’m blind help me!” – only thanking us for what we left.

We shook hands with Enson and Mashiko and promised we would find a way to come back again with even more supplies.   As we pulled out of the “camp” I noticed Enson and Mashiko pull over.   He jumped out and ran over to an animal shelter that had been set up at the end of the community.   They needed food for the animals, and Enson had to oblige them.  His hummer opened up and out came the rest of the pet food.   Ric and I talked on the ride back to Tokyo for several hours, just amazed at all Enson and Mashiko do.  This was Ensons eighteenth trip to the area – never thinking of his own health, only of the people and animals in Fukushima and their needs.

Enson Inoue told me: “I’m amazed everyone one is not helping. They need our help, and it’s the right thing to do.”

We will return to help Enson and Mashiko, because it’s needed.  Because it’s the right thing to do.

Enson, Mashiko and Ric… true heroes!  I can only be thankful I have bean able to witness and learn from such great and caring men.