Empire State Building to Light Up for the Dolphins

Home/Blog/Empire State Building to Light Up for the Dolphins 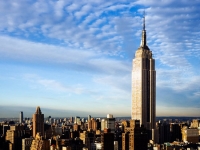 Tomorrow, Friday, Dec. 9th, the Empire State Building in New York will be lit up in red to raise awareness about the plight of dolphins being slaughtered in Taiji, Japan.

I will be there with The Cove Director Louie Psihoyos, Cove Producer Fisher Stevens, and actor/comedian John Leguizamo.

This whole idea was hatched by Leilani Munter, our racecar driver volunteer who was at the Cove earlier this year as a monitor for Save Japan Dolphins.  She convinced the owners of the Empire State Building to host a special lighting ceremony to remind people about the plight of dolphins in Japan.  Leilani will be joining us in New York.

We need to let the people of Japan know what is happening in Taiji and other remote ports of Japan, where the government Japan Fisheries Agency issues permits to kill dolphins for meat – meat that is highly contaminated with mercury and other pollutants.

Before the people of Japan can stop their government from supporting this annual slaughter, they need to know about it.

And what better way than to light up the iconic Empire State Building in New York, the “World’s Most Famous Office Building”, in red lights?