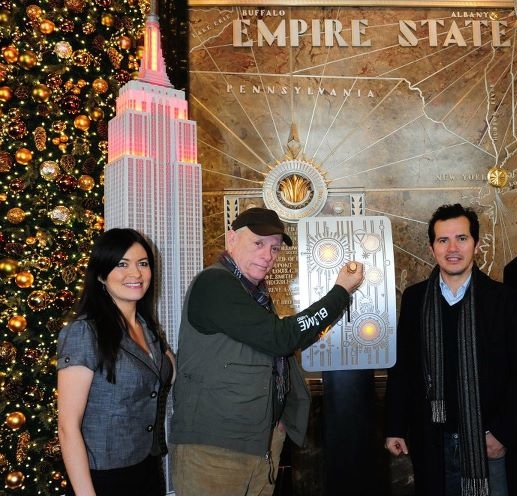 All weekend long, the iconic Empire State Building in New York will be lit up in red to remind the world about the plight of dolphins.

The owner of the Empire State Building was inspired to get involved after seeing the Academy-Award winning feature documentary The Cove.

Actor John Leguizamo, known for a wide number of starring roles in movies and television, including Moulin Rouge and Romeo+Juliet, was there on Friday bringing star power, joining The Cove’s director Louie Psihoyos and The Cove’s produce Fisher Stevens, and our Dolphin Project volunteer and professional race car driver Leilani Munter.  It was great fun for all of us to meet the media and ceremonially pull the handle of the main circuit for the light show.  And we had great views from the top of the building, nicknamed “the most famous building in the world.”  I’m pretty sure King Kong had something to do with that.

We are working to get the word out in Japan, so our story (Louie filmed the entire event) and photos are being prepared in Japanese for distribution to the media there. The ceremony was not an attack on the people of Japan.  It was rather a plea for their help in shutting down the Cove.  It’s really up to them.   We need to let the people of Japan know what is happening in Taiji and other remote ports of Japan, where the government issues permits to kill dolphins for meat – meat that is highly contaminated with mercury and other pollutants.

Dolphin Project would like to thank our good friends John Leguizamo, Fisher Stevens, Louie Psihoyos, and of course Leilani Munter for participating in this event and helping to make it such a success.  And thanks to Deborah Bassett for taking photos of the event.  Thanks also to Fonda Berosini for helping organize the event.

Someday soon we will all get together at some tall building in Tokyo, and light it up in blue lights to symbolize an end to the killing of dolphins and whales in that country.

Won’t that be something!