Egypt’s Taiji Four in a New Tank; Fight Continues Against the Dolphinarium

Home/Blog/Captivity Industry/Egypt’s Taiji Four in a New Tank; Fight Continues Against the Dolphinarium 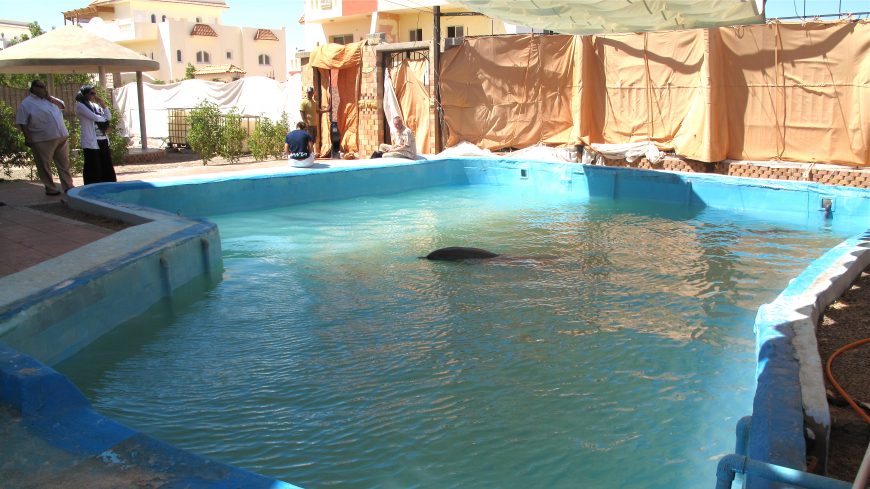 Wagby Saad, the owner of the four dolphins imported from Taiji (“The Taiji Four”) to Hurghada, Egypt, has finally transferred them to a somewhat bigger new tank (as opposed to his backyard swimming pool).  It remains to be seen whether they will survive, as we believe they are not very healthy.  The new tank is literally in the middle of the Eastern Sahara desert, open to dust, heat and UV radiation.

Lincoln O’Barry and photographer Kate Tomlinson stayed up all night on the roof of a villa near the dolphin owner’s home, to capture the transfer of the dolphins to the new tank (and make sure the owner did not pull some trick).   I was allowed inside the owner’s home to observe and represent HEPCA.  Besides two disgruntled Mexican dolphin trainers and a vet, there was an ex-military Russian dolphin trainer (who seemed to be in charge) and a Russian vet.  Dolphin trafficking is truly an international scam.

The three thugs who attacked us on two separate occasions were also present. Their attack pit bull was missing.  When I asked about the dog, they all insisted that they never had a pit bull!  I was banned from taking photos inside the dolphin owner’s villa.

At the same time, new construction in the desert suggests that the owner is now building his new dolphinarium, which we strongly oppose.

HEPCA, the local Egyptian environmental organization that has been in the forefront of efforts to stop the dolphin imports and the dolphinarium, is working hard to see if they can get local authorities to halt the construction.  The Taiji Four should be the last dolphins ever shipped to Hurghada, given the very strong opposition from the local community, the mayor, and the governor of the Red Sea.

Amr Ali, Executive Director of HEPCA, gave me a Red Sea Defender award for my help to them in opposing the dolphinarium and looking to the welfare of the Taiji Four.

You can see my speech to HEPCA on YouTube:

I have to leave for now, but HEPCA will continue the fight in Egypt.  They have done a tremendous job for the dolphins.  As I noted in a earlier blog, they have already gained a decree by the local government banning further imports of wild-caught dolphins to this area.   If you would like to help the effort, you can sign their online petition:

This will be an ongoing story, as we do not know the fate of the Taiji Four who are now part of the Sahara desert landscape. Our hope is to see them returned to Japan and set free one day. Not in Taiji, but in a place where dolphins are respected such as Mikurajima Island.

And finally, SHAME on WAZA, (World Association of Zoos and Aquariums) for not policing their own industry. You can sign on to the WAZA petition here:

Thanks for all your support.  Your donations to our Save Japan Dolphins Campaign helps me go to places all around the world, including Japan and the Solomon Islands, to fight for the protection of dolphins and whales.