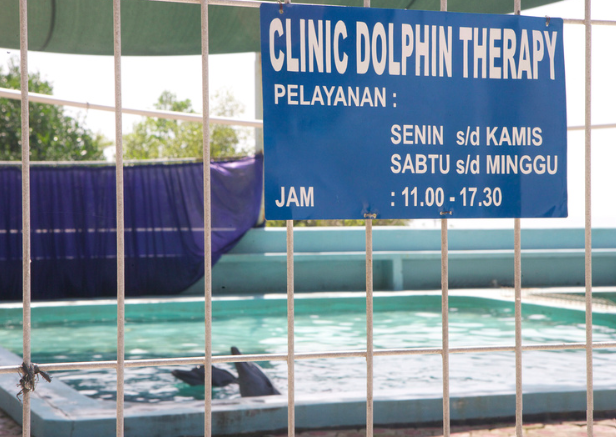 Dolphin-Assisted Therapy has become a lucrative business over the past few years and presents a serious threat to the welfare of dolphins in that it creates further captures, trade, and captive breeding of dolphins worldwide.  Furthermore, it takes advantage of desperate and vulnerable parents who readily pay large sums of money to give their ill or disabled children what the billion-dollar dolphin captivity industry advertises as a life-enhancing dolphin experience.

Here’s a great article by Dr. Lori Marino in Aeon Magazine that addresses the myth of Dolphin-Assisted Therapy.

There is no scientific evidence to substantiate the claim that spending time in a tank or sea enclosure with dolphins has a healing effect on ill and disabled people. Even if there was, could this really justify the high price that dolphins pay for our desire to be close to them?  When considering whether or not using dolphins to heal people is acceptable, it is important to note the following:

Dolphins are free ranging, social, sonic, and highly intelligent marine mammals. The vastness and biological diversity of the open sea, in which dolphins and other whales have developed over more than 50 million years, cannot be duplicated in a tank or an enclosure in the sea. Consequently, the complexity of dolphins’ behavioral repertoire cannot be accommodated in captivity.  Based on today’s knowledge of cetaceans’ sophisticated physiology and highly developed emotional sense, one must conclude that confining dolphins and other whales to a small space inevitably causes stress in the animals.  This negative effect is reinforced by the fact that dolphins used in swim programs have to be trained by the means of food control to endure the constant pressure of being treated as pets.  If they don’t perform, such as pulling people along through the water or “kissing” people, they don’t eat.

It is hardly surprising that dolphins used in swim programs have demonstrated agitated and aggressive behaviors under the stressful conditions of confinement and forced interactions with people.  These behaviors have resulted in injury to swimmers.  There are accounts of human injuries in the form of lacerations, tooth rakes, internal injuries, broken bones, and shock.  As a matter of fact, the decision to put an end to the television series Flipper was in large part based on the fact that it became too dangerous for the actors to be in the water with the dolphins.  Needless to say, a 3-400 pound frustrated animal can cause serious injury to a human being.

The issue of using dolphins as a tool to obtain a feel-good experience is not one of science, but of ethics:   It is inherently hypocritical to capture and confine dolphins — thereby destroying the quality of their lives — in an attempt to enhance our own.