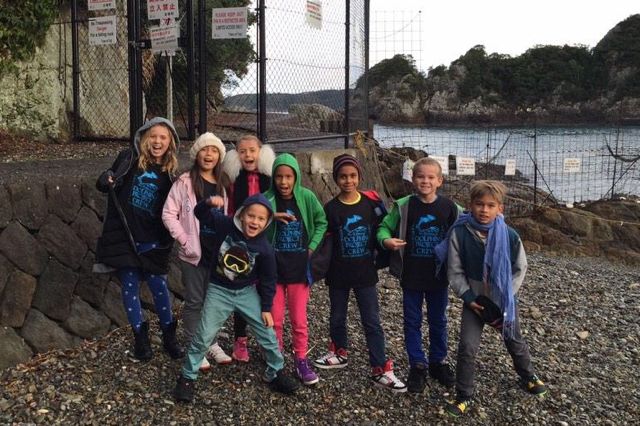 Thanks to a collaboration between one of our Cove Monitors and a conscientious teacher from Thailand, we’re excited to welcome a group of children to Taiji from the Gecko Community in Phuket. This visit is the first of its kind for Ric O’Barry’s Dolphin Project at the Cove, and marks the start of a campaign to welcome more young voices into the fight to raise awareness over the plight of Taiji dolphins.

The project began following a planned dolphinarium in Phuket, one of the southern provinces of Thailand. Due to receive five dolphins captured in the Taiji dolphins drives, Gecko school reached out to Vicki Kiely, one of our Cove Monitors based in the same region:

I, of course, said that I would come in and speak to the kids about Taiji and the Cove and also what it means for the dolphins and their quality of life when they are in captivity, and why we needed to stop going to dolphin shows. I had been going into other schools as it was educating and creating awareness on this issue, so I was so delighted to now have schools coming to me to talk.

Having watched “The Cove” movie prior to her visit, Kiely said the kids, “were full of questions, outrage, and disbelief.” They were so full of passion and love for dolphins and marine life, she added, “it touched my heart.”

The children composed these letters themselves, I merely guided them with information and facts. This was a passion project that they had decided to do.

Destined for a stint at the Cove shortly afterwards, Kiely went to Taiji and took pebbles with her that the children had decorated for the dolphins:

I threw them into the ocean from the Cove for them and sent them a video of me doing so … it was a very fragile bittersweet experience for me doing that … this action of throwing the pebbles with their messages into the water for the dolphins to see.

Shortly afterwards, the children, along with their teacher — Tracy (Celi) Harper, represented themselves at a Marine Tourism event for The American Chamber of Commerce in Thailand (AMCHAM), where they gave a presentation on the Taiji dolphin drives. “They blew the audience away with their presentation,” Kiely said. Their message — “We are just kids trying to make a change … you guys are ADULTS … what are YOU going to do about it,” was both poignant and powerful. Kiely explained, “this should be the message that these kids report when they are here in Japan. They have the power.”

It was the kids’ teacher who first had designs to go to Taiji. Harper expressed her wishes to stand with Kiely at the Cove, but the kids refused to be left out and wanted to go as well. Working with various Dolphin Project members — including Ric O’Barry, arrangements were made for their visit and the children even organized a 100 km bike ride to raise funds to help them get here. Kiely will welcome the eight children (ages 8-13) and their teacher, to Taiji today.

There will be no sugarcoating Taiji for these children — it’s impossible to do that. “They will be doing everything we do,” Kiely said.” We will visit Nachi Falls and they will do a livestream from the Cove and visit the captive dolphins at the Taiji Whale museum,” she said. “We want their message on captivity from there.” Their message will form part of a mini documentary in which the children will share their message with the Mayor of Taiji, the dolphin hunters, the Fishermen’s Union, the Japanese Prime Minister — Shinzo Abe, and of course, the world. These phenomenal kids will be in Taiji from January 30th to February 5th.

I just took the @Dolphin_Project pledge NOT to buy a ticket to a dolphin show. Sign here: http://t.co/MkjsZzXt7T #DolphinProject Join Me 🙂

This is the first of many new, exciting ventures for the Dolphin Project in which we hope to raise awareness for young people around the globe. We value the youth of today and their involvement. They will carry the legacy of the Dolphin Project into the future. In recognizing this and the passion that children and young adults effectively harness, we’d also like to take this opportunity to introduce our new Dolphin Project Youth Ambassadors.

Just had lunch with @LincolnOBarry @RichardOBarry Check out @Dolphin_Project and see if you support them like I do. — Harry Styles. (@Harry_Styles) October 5, 2014

Ella Van Cleave: At sixteen years of age, Ella is one of the foremost voices on cetacean welfare and earned much admiration for the passionate speech she gave at TEDx when she was just fourteen.

Dominic Sebastian: Ten year old Dominic writes, “The animals in the world are just like you and I. They have feelings and can feel pain too.” Dominic can be found leading the protest almost every week at the Miami Seaquarium.

Devon Haas: The Founder of the @ISF_KidsArmy, at just 10-years-old, she’s already a tour de force.

Harry Morgan: Harry writes, “I like seeing dolphins and whales in the wild. I want to stop people killing them and putting them in captivity.” Harry formed a Cove Club at his school on a remote island off of Northern Australia. He also dyed his hair blue in an online challenge to raise awareness and funds for the Dolphin Project.

And last, but most certainly not least — Zach Affolter:

Zach literally hit the ground running campaigning for cetacean welfare, and we don’t believe he’ll ever stop. Recently, Zach gave a rousing speech at the Miracle March for Lolita. He’s been interviewed by major media and we see a sparkling bright future for this young man from San Diego, Calif.

Such is the future of the Dolphin Project, and it’s sparkling brighter every day.