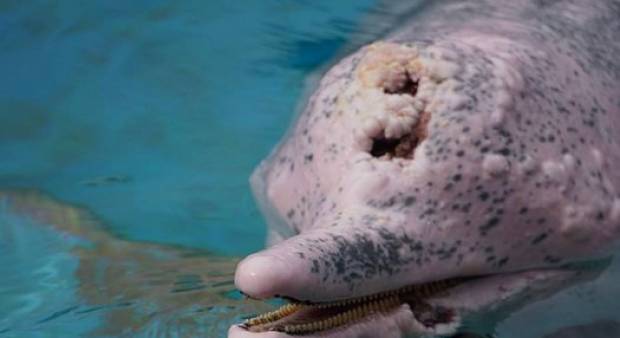 A pink dolphin at Underwater World Singapore (UWS) made the news this week following a published report by Wildlife Watcher Singapore. The undercover investigation conducted in collaboration with Sea Shepherd Conservation Society and supported by Pramudya Harzani of Ric O’Barry’s Dolphin Project (Indonesia), revealed algae-covered tanks, dirty water, and Han, an Indo-Pacific humpbacked dolphin who is suffering with skin cancer.

UWS asserted that Han had a non-contagious form of skin cancer but was doing well outside of the disease. The Agri-Food and Veterinary Authority of Singapore (AVA) — who inspected the facility at the request of the investigators, subsequently cleared it. After examining images of Han, Dolphin Project vet — Luca Giovagnoli, DVM, said that Han’s condition appeared consistent with an “already, very advanced” form of skin cancer.

It seems to be a strong alteration of the skin and subcutaneous tissue. It could be a melanoma. It would be necessary, however, to assess from a point of view of the biopsy, what type of cancer it is.

A fundamental error is made when we speak about “non-contagious cancer.” No tumor of any nature is infectious, there is no direct transmission of such pathology in marine mammals. The only exception is in other animals: a parasitic cancer or transmissible cancer is a cancer cell or cluster of cancer cells that can be transmitted from animal to animal.

Although cancer is not normally a contagious disease the vet said, there are three known exceptions in animals: one in dogs, another in the golden or Syrian hamster, and the third, in the Tasmanian devil. “These cancers have a relatively stable genome as they are transmitted,” said Giovagnoli.

Skin cancer in captive dolphins, the vet suggests, comes from a series of well-known elements — prolonged exposure to the sun, stress, the presence of heavy metals, and algae in the environment of life.

It is well known by now that prolonged exposure to chromium is the cause of skin cancer in humans and animals. Chromium is a heavy metal present in nature in different aspects, the worst of which, is hexavalent chromium. This form is the most toxic.

The negative effects of hexavalent on the skin may include ulcerations, dermatitis, and allergic skin reactions leading to melanoma. If the dolphin in question lives in a pool painted with cheap paint, which tends to peel, the concentrations of the pigments in the water will certainly be very high.

It should not be ruled out that the skin condition in the absence of diagnostic elements can also be caused by other factors that are associated with this classic skin cancer. A combination of persistent organic pollutants (POPs) and herpes virus similar to the one that infects humans has led to an increase in cancer, especially skin cancer. — Dr. Giovagnoli

Peeling paint however, is only one issue that is problematic for captive marine mammals. Algae growth and cyanobacteria — which get their energy through photosynthesis, can also have a detrimental effect on captive animals. Giovagnoli writes:

The symptoms are itching and burning within a few minutes to a few hours after swimming in an area where fragments of the cyanobacteria are suspended. Visible dermatitis and redness develop after 3–8 hours, followed by blisters and deep desquamation. After extended exposure, it’s possible to find skin cancer in humans and marine mammals too. Cyanobacteria are growing really fast in polluted and warm waters.

One thing is clear, if Han remains in his current conditions, his future is bleak.

“The conditions of stress and poor living conditions inevitably lead to a lowering of the immune system, with potential consequences of additional diseases,” Giovagnoli told Dolphin Project. “The only thing we could do is clean the water in the tank to improve his environment. Only then,” explained the vet, “could we start to think to about chemotherapy and alternative medicine.”

— Luca Giovagnoli, DVM, graduated from the University of Parma in Veterinary Medicine. He is a Veterinary Medicine Surgeon and expert in Homeopathy, Homotoxicology and Integrated Medical Disciplines. He operates a veterinary practice in Ancona, Italy.