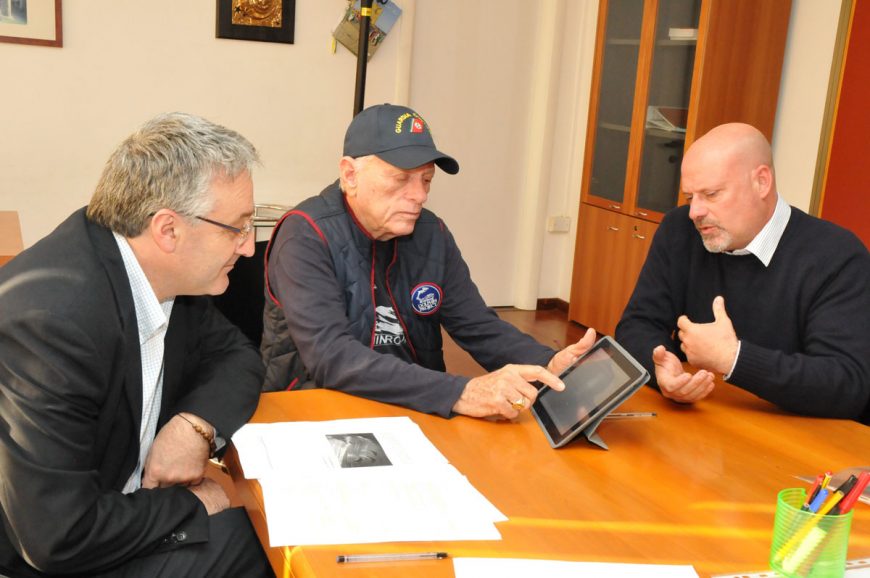 Dolphin Project founder and director Mr. Ric O’Barry was in Ancona, Italy this week on an official visit. Ric was there to help launch ‘Dolphin Project Italia’, a new venture between Dolphin Project and Ancona-based organization, Cetaceansound-Italy.org.

Chaired by Dr. Luca Giovagnoli, our resident marine mammal vet, Cetaceansound-Italy, and Dolphin Project will collaborate on a care and protection center for dolphins located somewhere along the coast of Conero in the Marche Region of Italy. Ric and Dr. Giovagnoli together met with representatives of the Marche Region, including Deputy Mayor Angelo Sciapichetti, Dr. Claudio Zabaglia, Fabio Sturani the head of the Secretariat of the Presidency, and other officials.

Ric was also received by Admiral Francesco Saverio Ferrara and Captain Commander Giuseppe Semeraro, both of the Italian Coast Guard based in Ancona-Harbor.

Accompanying Ric and Dr. Giovagnoli were Annette Roll and Cristiana Camilloni from the Association Cetaceansound-Italy. The focus of the meetings was to gather information and scout out a potential area for the care center and to assess and discuss the feasibility of a project of this magnitude. Inspections were carried out with the gracious assistance of the Italian Coast Guard – Ancona Harbor, and by members of the sailing Associations ‘La Perla del Conero’ and the ‘Yacht Club Ancona’. All of these groups generously provided resources and expertise which enabled us to assess the technical aspects of the care center.

It was decided that the creation of a natural site would be best, and while we are still doing the research to ensure it’s viable, we know it will work as a rescue center for dolphins, turtles, and seabirds. The bigger vision, of course, is to turn it into a sanctuary for non-releasable captive dolphins. The area under consideration for the dolphin care center near Sirolo, Italy. Image: Dolphin Project

As the first of its kind care center, it will be small. However, it is a prototype for other care centers to be built upon.

The realization of such a project would place the Marche region in an advantageous position to safeguard and protect the dolphins. The structure itself has the potential for different uses. The safe and quiet location is available to temporarily hold dolphins and offers the unique ability to protect other marine creatures. In a time when marine parks are closing, what better than a specialized center as an alternative to another marine park? A place where dolphin could be assessed for release back to the sea.

Dolphin Project Italia was founded as an opportunity to provide protection and care of marine species directly in their own environment and without the need to move animals to other facilities. Ric O’Barry’s experience with the readaption of former show dolphins is essential for the project to be implemented successfully.

Ric and Luca’s visit ended with an educational note at Villa Magnolia Candia (AN). A presentation of the 2009 Academy Award-winning documentary “The Cove”, capped a successful visit to Ancona.

As the former dolphin trainer of ‘Flipper’, Ric O’Barry has spent the past 45 years advocating for the protection of dolphins. Through his personal connection with the dolphins who portrayed Flipper, Ric learned about the importance of freedom for these wide-ranging marine mammals. On Earth Day 1970, he founded the Dolphin Project and has been fighting for dolphins’ rights ever since.

Cetaceansound-Italy is an association recognized by the Marche Region and based in Ancona, Italy. It aims to promote the study of the sea with a view to environmental protection for all marine creatures.

Using a natural setting for the care center is essential to Dolphin Project Italia. Still under development, the need to evaluate the plan thoroughly is crucial for the animals and for the environmental protection of the coastal area. This unique initiative is exciting and will be the first of its kind in the European Community.