Dolphin Project Back in Taiji

Home/Blog/Japan/Dolphin Project Back in Taiji 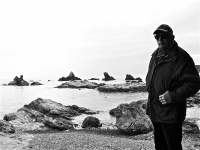 Ric O’Barry’s Dolphin Project returns to the notorious Cove – made infamous by the Academy Award-winning documentary The Cove – for the beginning of the six month-long dolphin-slaughter season on Sept. 1st 2012.

“We have made some progress; the number of dolphins being killed in Taiji has gone down for the past four years of our Save Japan Dolphins Campaign,” noted O’Barry.  “The Japanese people, being warned about mercury and other contaminants in dolphin and whale meat, are buying less and less of it.”

Beginning at 11 AM on September 1st, representatives from 5 continents will arrive at the Cove in Taiji, Japan, to conduct a series of events to mark the new dolphin slaughter season and to tell the world what is happening in Taiji:

• Participants will form a circle for a moment of silence for the souls of the dolphins that have been killed in the past and will be killed in the coming season.  Taiji receives permits to kill almost 2,100 dolphins each year in the most horrible ways imaginable.  The prayer will also honor the victims of the March 2011 earthquake and tsunami, as well as those who lost their lives in Taiji/Wakamaya Prefecture during the August 2012 typhoon.  The Dolphin Project had team members on the ground during both tragedies and are deeply saddened by the loss of life and turmoil.

• Up and coming singer/song-writer/guitar artist Arielle will perform songs she has written about the dolphins.

• Participants will line the street in front of the Cove with signs in Japanese warning the Japanese people that “Dolphin Meat is Poisoned by Mercury.”  Heavy metal pollution of dolphin and whale meat makes it dangerous for anyone to eat.

The dolphin hunts are scheduled to begin on Sept. 1st.  Ric O’Barry’s Dolphin Project will be fielding volunteer Cove Monitors for the entire season again