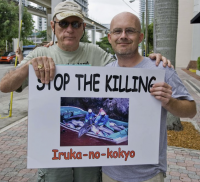 Our newest volunteer monitor, Brian Barnes, arrived in Taiji today, and received a surprise.  The dolphin killers have reportedly quit killing dolphins for the season, ending a whole month early.  Officially, the season lasts through March, although the killing drops off considerably by the middle of that month.  This year, they may have stopped early, but Brian is investigating further.

If the season has ended early, it is likely because demand in Japan for whale and dolphin meat declined last year by 30%, due to our work in publicizing the mercury contamination of dolphin and some whale meat.  However, the Taiji fishermen have been catching more dolphins and small whales for captivity than ever before, so the trafficking in live dolphins will likely bring them more money than ever.

Brian gives us his first impressions of Taiji:

After a few very long days of travel, I finally arrived in Taiji this afternoon.  I really didn’t know what to expect when I got off the train, but found that most people in town are immediately suspicious of anyone who is a foreigner.

I suppose it’s understandable considering this town has for years been able to kill tens of thousands of dolphins for decades without much international exposure, even though Ric O’Barry and others have long since tried, it wasn’t until the Academy Award winning documentary The Cove that the secrets of what happens in Taiji’s killing cove truly gained international exposure.

The first thing that immediately strikes is the town’s iconic whale statues and art.  As I was renting my car I noticed a photograph on the wall of a humpback whale, and even on the office clock was a comic book style cartoon whale.  There does seem to be a disconnect here, but I grew up in the Midwest around cattle ranches, and it reminds me of all the photos I have seen of cattle hanging on the walls of homes and businesses throughout the Great Plains.

I’ve also already been asked by one of the town’s residents: “What is so special about whales and dolphins and not cows and chickens?”  I doubt that I know enough Japanese, or he knew enough English for us to have an intelligent conversation.  But, I’ll be happy to answer the question here as I see it.

There is a difference pertaining to the ecosystem and either farmed animals or wild animals.  When a cow or chicken is removed from a farm, nothing is removed from the ecosystem.  When a wild animal is removed from its natural habitat, not only is that animals life taken, but it’s also depriving possibly millions of others of animals who depend on what has been removed both while it’s alive and after it dies in it’s natural environment.  This is especially a problem when whole populations of dolphins are removed and permanently depressed in numbers in the ecosystem.

That’s my general outlook from a scientific viewpoint with ethics removed.  There are of course many ethical arguments that can be made based on cetacean intelligence, their complex social structures, and the fact that animals who use echo location shouldn’t be in tanks or swimming pools due to the health effects it has upon them.

I plan to use my time here to monitor the daily activities in the killing cove (if indeed any further killing takes place this season!), work on my Japanese language skills and learn about the local culture as much as possible.   It’s already been quite an experience, and I’m just barely settled into the hotel in a nearby town.  But so far, my first impression of the people in this area is that they are good people.  It seems to be a minor few that are at the center of this issue.  I hope that through communication, we can break through this barrier of disconnect and possibly even help this town work out economic alternatives.

I’ll probably make more trips to Taiji in the future, it’s my hope that someday when foreigners step off the train, there will be no killing cove or captive dolphins and the foreigners, including myself, are greeted as friends, or even better – welcomed tourists.