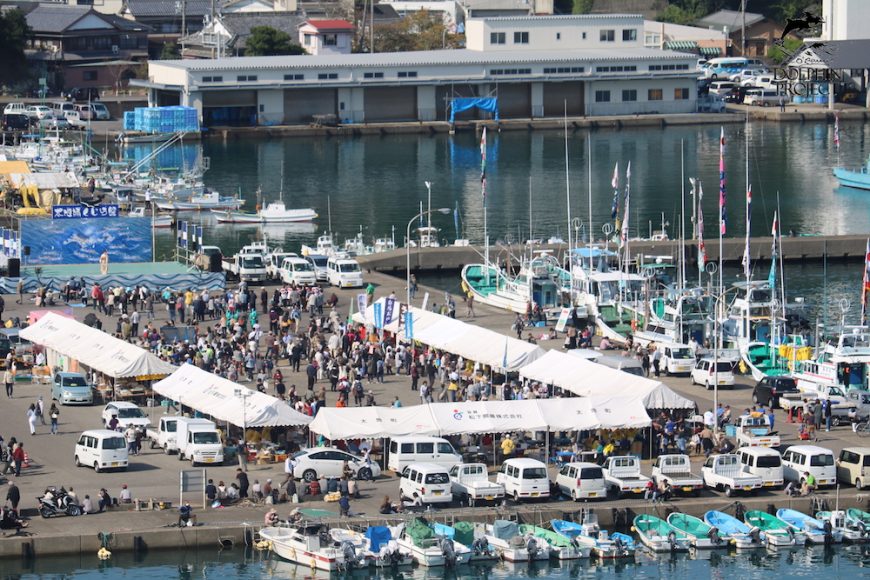 Last week, Taiji was filled with people and activity as the small town celebrated its annual Whale Festival. While police warned us of the presence of Nationalists, we decided to take our chances and check it out for ourselves.

The dolphin hunting (banger) boats were decked out in colorful flags, and vendors, set up under tents, sold a variety of meats including canned whale, whale skin, pilot whale intestine and deep fried whale. The smell of dolphin/whale meat being barbecued was one of the worst I had ever experienced.

There were reenactments of hunters going out to sea, teaching children that it’s okay to kill dolphins and whales. It’s a form of bad education, to encourage one to take what they want and own it as their own.

I filmed as much as I could, and then an opportunity struck which was as much surreal as it was shocking.

The banger boats were positioned at the harbor, and were made available to give a limited number of people free rides. Myself, along with the rest of the Dolphin Project team stood in line to get a ticket. We were each given one without any questions, but once we reached the boat, we were declined life jackets and entry. Eventually, after being warned not to try anything “funny,” or “make any films” we were allowed onto the boat.

The moment I stepped on board, it hit me:

I was standing on a hunting boat, with the presence of two dolphin hunters just steps away from me.

The boats started their engines and pulled away from the dock. I looked around but didn’t see anything out of the norm, with the exception of a small harpoon/spear on display. Suddenly the boat picked up speed, and I was shocked at how fast it was able to travel and the way it maneuvered at such a speed. While everyone around me was laughing and enjoying themselves, I began to feel sick. As the boat sped through the water, I looked back and saw the other boats in a line. They were so intimidating and I almost felt like we were in a drive formation…

One banger boat passed us, black smoke filling the air. I was struck by its speed and power and at that moment, realized the extreme trauma suffered by the dolphins when in pursuit by hunters. The chase is so unfair, and it’s easy to see how the very young, the very old or the sick are completely overpowered by the hunters.

Aboard a banger boat during Taiji Whale Festival, 11-6-16
Credit: DolphinProject.com

The trip lasted around 10 to 15 minutes and after we docked, we left the festival. It was an experience I will no doubt, continue to be haunted by.

Below are some of the videos we shot: