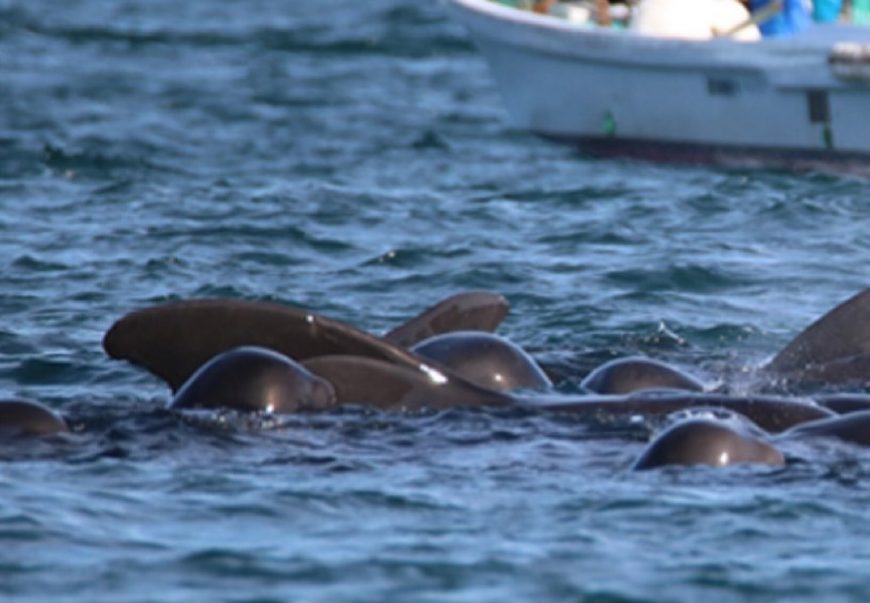 When a species is harassed, chased, hunted and slaughtered; when parents are killed and the young are left to fend for themselves; and when dolphins are held overnight with no access to food (nor water), the practice is cruel.

For six months of the year, beginning on September 1, banger boats head out to open waters in search of dolphin pods. Once a pod is located, the mammals are driven into shallow waters via acoustic harassment. (Poles are lowered into the water and ‘banged’ as to disorientate the dolphins, and sometimes weights are thrown into the water to terrorize them into compliance.) Once in the Cove (the subject of the 2010 Academy Award-winning documentary The Cove), the torment continues as the hunters push the dolphins near the shoreline, in order to inspect them for captivity, or to drive a spike into their bodies to kill them and sell their meat for consumption. Sometimes, as in the case of Pacific white-sided dolphins, the mammals are netted offshore. But mostly, it’s an inhumane chase where the hunters have the advantage, and the dolphins are innocent victims of greed and ignorance.

To-date, there have been a total of 84 dolphins slaughtered — 56 Risso’s dolphins, 11 pilot whales and approximately 17 melon-headed whales. Nine bottlenose dolphins have been taken captive. Throughout these drives, dolphins of all ages have been observed with injuries and have suffered greatly.

As in the previous two years, due to ongoing COVID-19-related travel disruptions, we continue to collaborate with Life Investigation Agency (LIA), headed up by Ren Yabuki and his team of all-Japanese activists, as well as other teams of independent Japanese activists who are on the ground in Taiji to document the drives and other events that take place there.

Dolphin Project also continues to support LIA’s ongoing efforts to legally challenge the drive hunts. In 2017, we began sharing our vast database, going back to 2003 when Ric O’Barry, Founder/Director of Dolphin Project first documented the dolphin slaughters and captive selection taking place in Taiji. Ren’s intention is to end the suffering of dolphins in Japan via legal and educational initiatives.

After waiting almost a year for Taiji to disclose public documents concerning the handling of cetaceans, with much of this information being completely redacted, Ren, as both Director of LIA and a resident of Taiji launched a lawsuit against the town for the disclosure of public documents related to dolphins taken captive and slaughtered in Taiji.

In addition, LIA has filed other lawsuits, supported by Dolphin Project. Details are forthcoming.