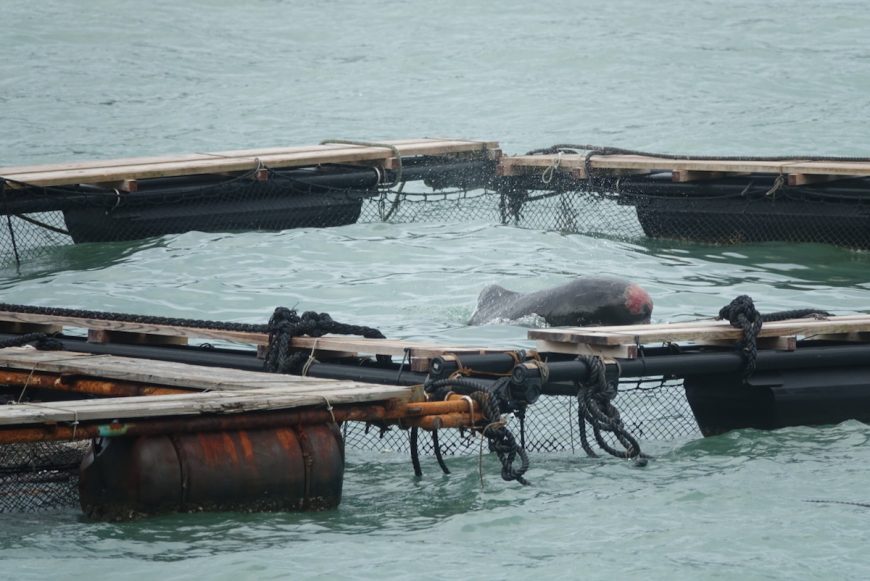 While there have been many “Blue Coves” of late, where no dolphins have been captured or killed, the captive dolphins in Taiji continue to languish. 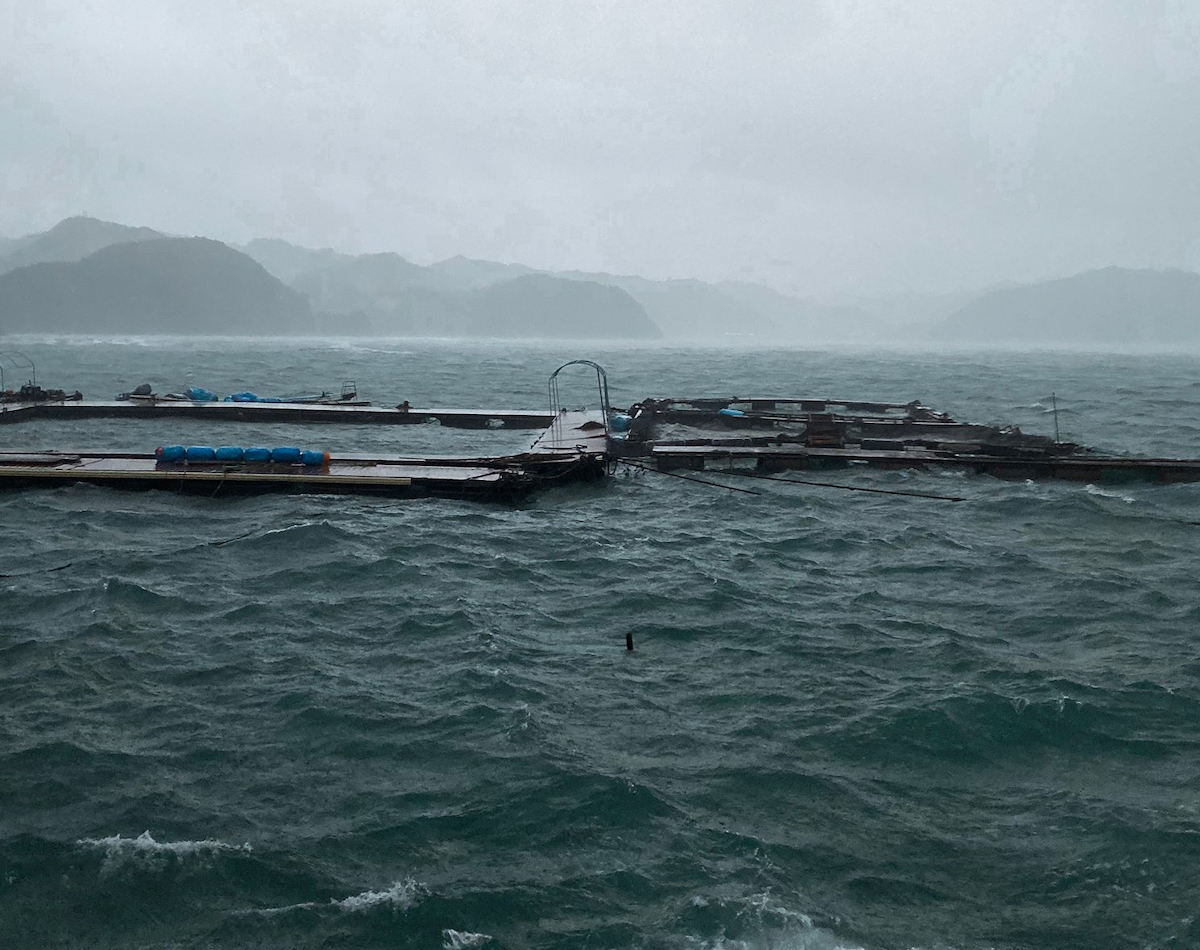 Since Typhoon Hagibis, the coast of Japan has also been affected by two other tropical storms: Severe Tropical Storm Neoguri and Typhoon Bualoi, bringing heavy rainfall and warnings of flooding, landslides and high waves, meaning that nets were removed from the Cove and dolphin hunting boats were securely docked in various places across the harbor. Yet again, these individuals showed their lack of compassion for dolphins as they focused on caring for their expensive hunting boats, while neglecting the captive dolphins who occupy the sea pens in Moriura Bay. We stood and documented for the second time at Dolphin Base as a worker attempted to secure the pens tighter to the main structure so they wouldn’t detach, rather than dropping the nets and saving the dolphins from potential harm.

When we returned the next morning, a couple of the pens that didn’t contain dolphins had been destroyed, with walkways snapped in half collapsing the pen inwards, and debris floating everywhere. We noticed that one of the pilot whales was suffering from a lesion on its melon, sporting a large, raw-looking red patch on its head. Dolphin Project Cove Monitors will continue to keep a close eye on this mammal. 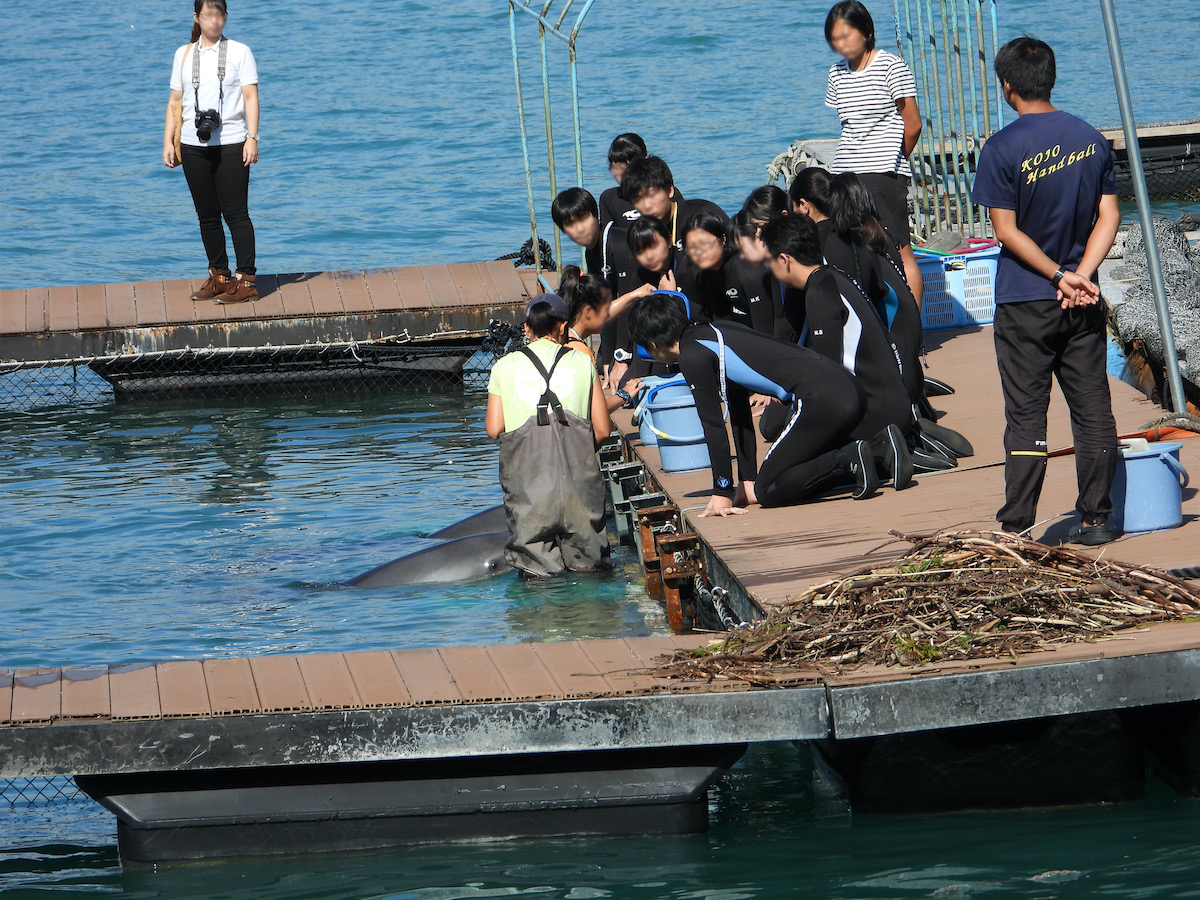 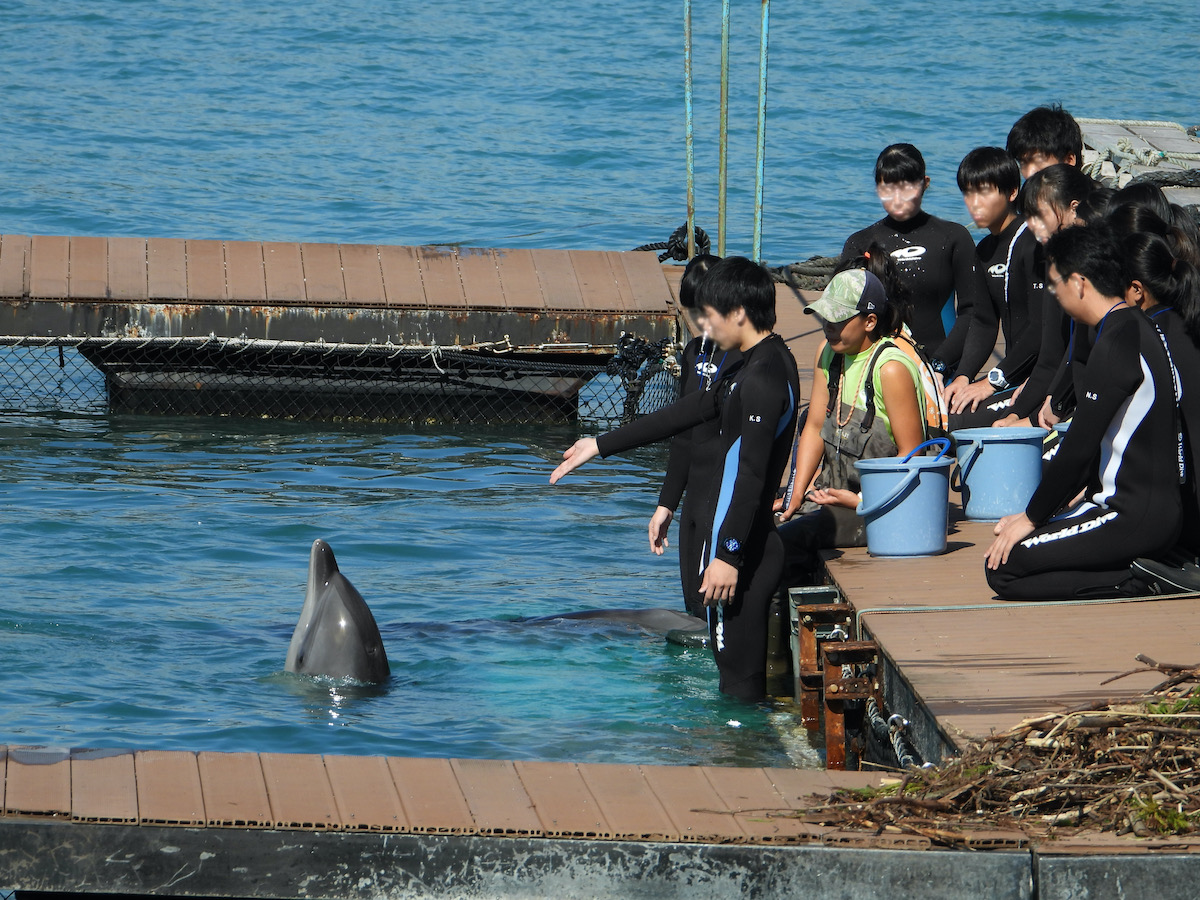 As the weather cleared up over the next few days and the Blue Coves continued, it sunk in even further how the captivity industry is the motivating force for hunting dolphins in Taiji. One day at Dolphin Base we witnessed a training session for 20 prospective dolphin trainers – all of them wearing matching wetsuits and taking turns instructing the dolphins to perform tricks in exchange for dead fish whilst being supervised by a seasoned trainer. Often, the dolphins did not recognize the cues from the inexperienced trainees, meaning they would perform a trick wrong and not be rewarded, or continue to perform the trick for a prolonged period. For example, at one point one of the trainees was blowing her whistle incorrectly, as the dolphin she was training didn’t know when to stop waving its tail fluke and was flailing upside down for a much longer time than usual. The fact that there were so many trainees is a stark reminder of how there is still such a demand for dolphins in captive facilities. 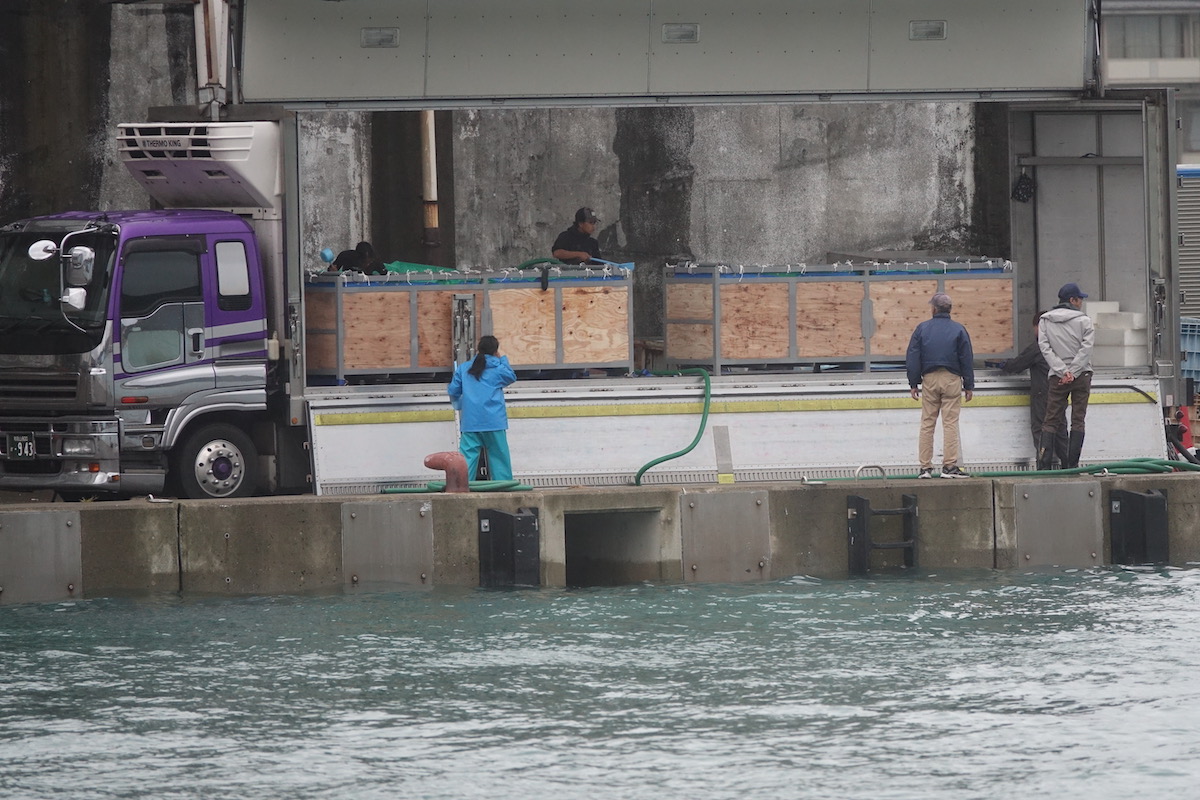 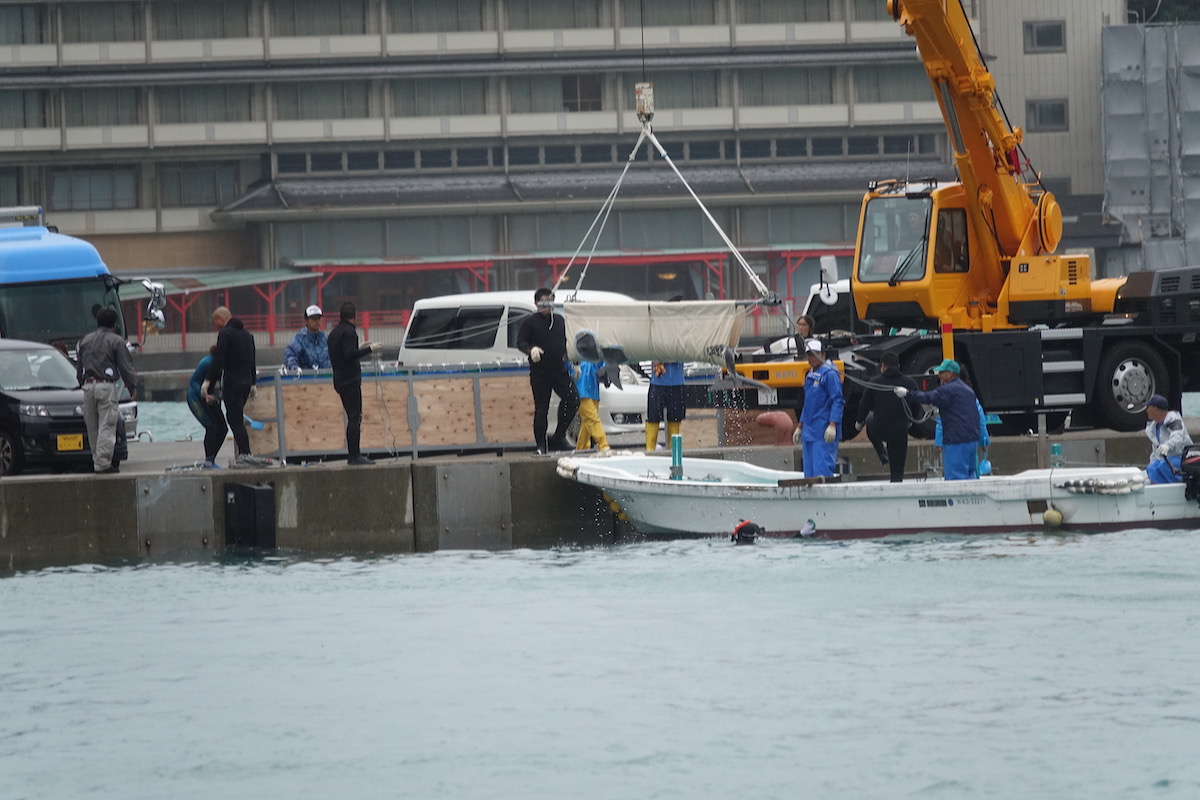 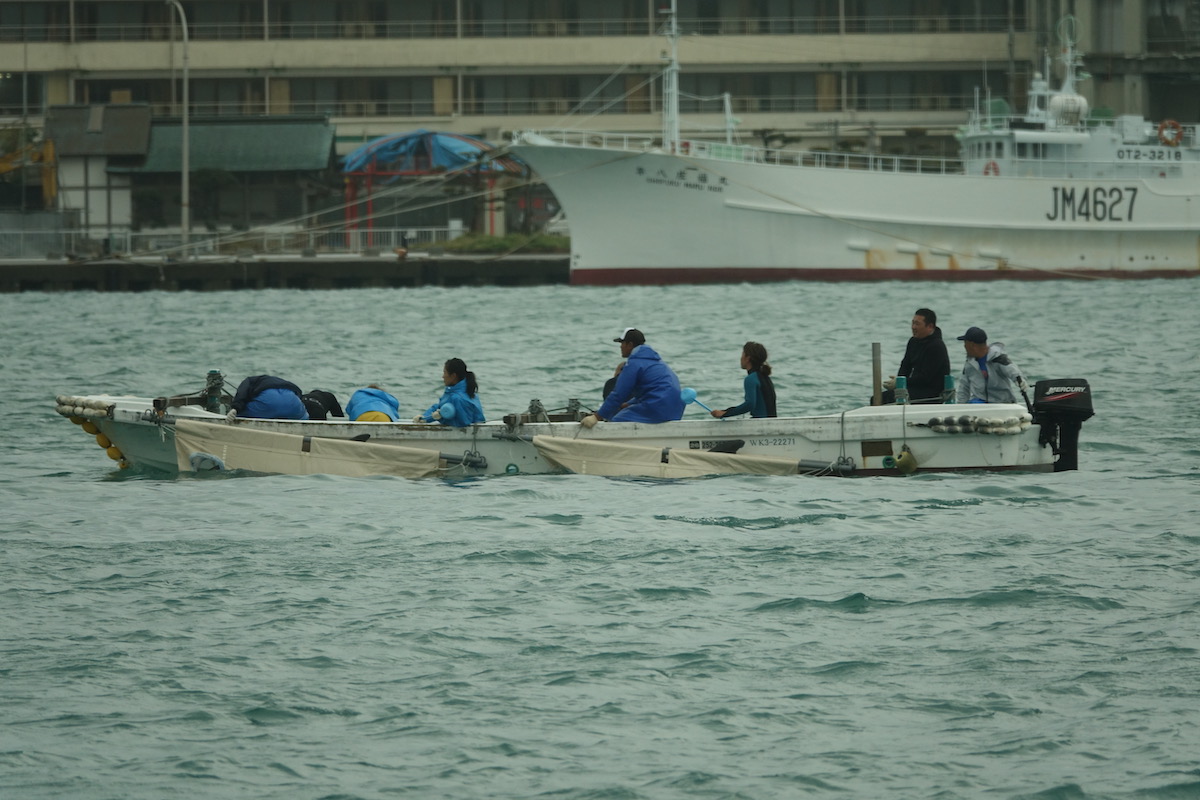 We discovered some brand new captive pens in the neighboring town of Nachikatsuura. These shiny, well constructed pens had several dolphins in them, and we soon learned that they were preparing for a captive transfer. We witnessed trainers strap four bottlenose dolphins into slings, drag them alongside a skiff from the pens to the harbor, and pull each of them high into the air by a crane before lowering them individually into wooden crates to be transported. Trainers were wearing ‘World Ranch STAFF” t-shirts, which is a captive facility based in Osaka. As we learn more, we will continue sharing this information.

The lone dolphin in Taiji Harbor 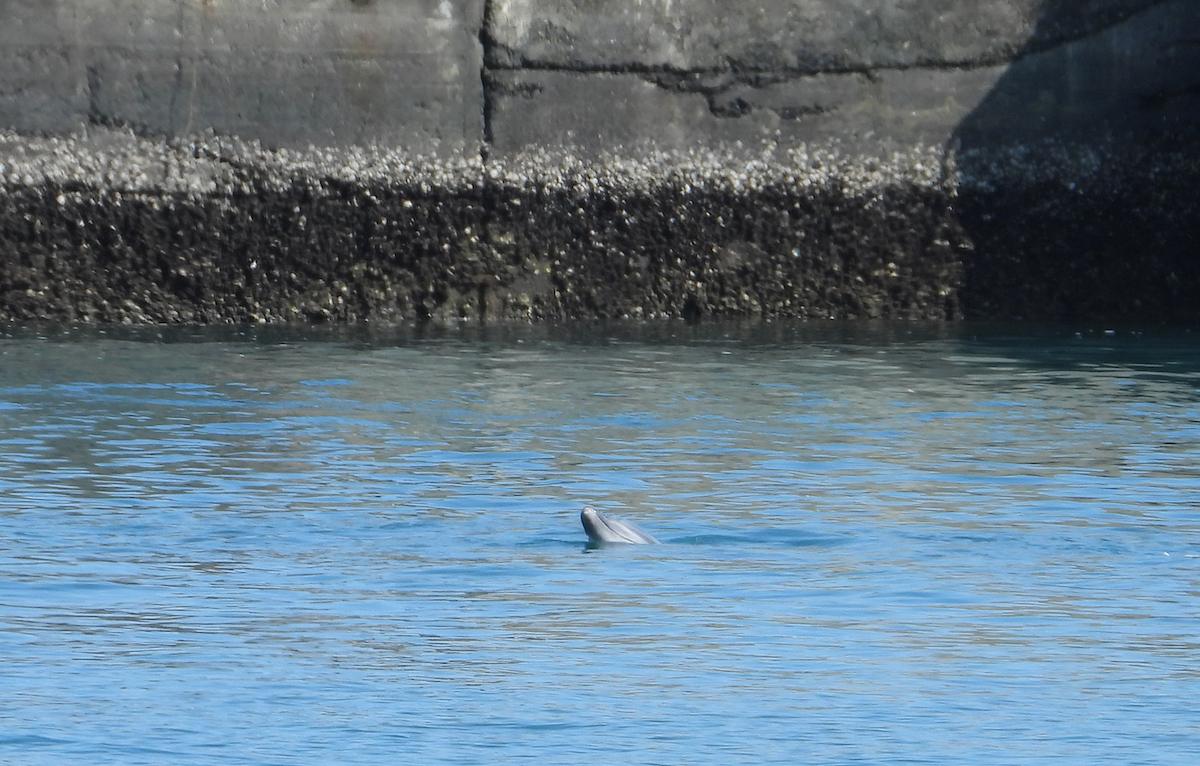 A few days ago as we were waiting for the dolphin hunting boats to return to harbor (the 12th boat often stays out longer collecting coral to make into jewelry to sell) we heard an loud slap on the surface of the water. We looked up to see a bottlenose dolphin breaching, right in the centre of the harbor another two times. SLAP! SLAP! We couldn’t believe our eyes, but we tried not to visibly react in order to not draw attention to the dolphin. We worried that as soon as the hunters or trainers became aware of the mammal, they would claim the dolphin to either slaughter or capture. About 20 minutes later, fishermen entered the harbor after being out at sea and paused when they noticed the dolphin. Two trainers eventually showed up on foot on the opposite side of the harbor with a bucket of fish. They waded into the water and climbed onto the structure of the harbor pens, trying to get the dolphin’s attention by waving and slapping the surface of the water. The dolphin didn’t respond, and without giving out a single fish, they left. We sat in the harbor for the rest of the afternoon waiting for someone to arrive, but nobody did. It’s possible that this is one of the bottlenose dolphins which escaped during Typhoon Hagibis but we cannot be certain. However, as that happened over two weeks ago, it’s possible that this dolphin has been fending for itself since that time. We were shocked at the lack of care displayed towards this lone animal who could be at risk being in such close proximity to boat propellers and other dangers.

There have been several more sightings of the bottlenose dolphin. Our team of Cove Monitors has witnessed the animal swim out towards the open sea on two separate occasions, however it returned promptly to the harbor both times. We will continue to monitor the area, although it’s possible that we may never know the fate of this dolphin.

These Blue Cove days are bittersweet, as even though the wild dolphins migrating past Taiji swim free, there always seems to be dolphins who are suffering somewhere.