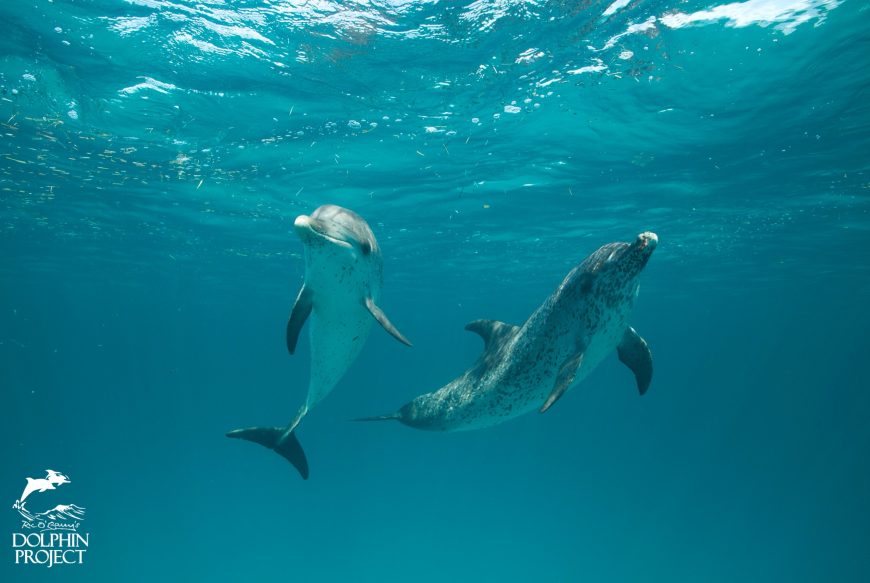 It is well known — for some time now, that dolphins speak and communicate with each other; not just a language, but also a precise code; a kind of language including their dialect of origin. Recent studies on bottlenose dolphins, have shown that these mammals have a repertoire of about 14 sounds that articulate with each other, to send messages to members of their group and to those of other species.

Studies of free dolphins in waters off the Bahamas, showed that bottlenose dolphins and striped dolphins communicate with each other even though they belong to different species, even changing from time-to-time into their own “dialect”.

Dolphins speak with their group using a particular “dialect” that develops over the years and becomes a vehicle of recognition between specimens within the same community. They’re also able to change their “language” when they need to speak with other groups or other species.

Generally, dolphins communicate using two languages or acoustic signals: the sounds (frequency 20kHz) – vocalization signals, and ultrasound (frequency between 20 and 200 kHz) — sonar or echolocation signals. The two vocalizations are very different; the former is innate, and produced on the occasion of a specific event which in general, reflects the emotional reaction of the dolphin to an external stimulus.

In courtship, when dolphins are afraid, or mad, or when they are stressed for example, these super intelligent mammals emit frequencies from 20kHz. These are spontaneous shouts, immediately perceptible, easy to issue, and easily understood. The sonar signals from 20 to 200 kHz are far more difficult to learn and understand.

Spotted & Bottlenose dolphins together in the Bahamas
Photo: DolphinProject.net

The sharing of perceptions/evocations arising from sonar signals are learned over time and require that the community has formed a sonar common language — a connection of sounds and acoustic images that can be applied to the entire community. It can be assumed therefore, that the language sonar of a group requires a long learning period by its younger members, because it contains many elements of a typical and exclusive community. In short, dolphins have to live through a long learning period before forming a group with whom they can share language.

This training and learning – slow and complicated, allows them to navigate the jungle of sonar signals from other group members, which they need in order to learn to listen and speak the same language. This occurs in the open sea as a normal process of learning. Although lengthy, this is part of the normal process of say, the growth of puppies, who upon reaching adulthood, are able to communicate perfectly with the other members of the group.

One highly negative effect  of captivity for dolphins, is the variation of language in individual animals and the transformation of the issue of sounds. It has been observed that when comparing the vocalizations of bottlenose dolphins in the open sea, to their captive counterparts in a tank, the latter often display a lower frequency and are much less articulated.

This reduction in vocalizations is due in part to the effect of the echo caused by the walls of the pools where the dolphins are confined. Yet despite assurances of many water parks that dolphins do not suffer in their environments, this echo phenomenon is well-known in closed environments. This process of having to create a way to “communicate” with each other, is completely unnatural and becomes the cause of tremendous stress and social conflicts. The stress induced from this, causes a considerable reduction of the dolphin’s immune defenses when the animal is confined in a tub. For this reason, a dolphin needing to be released into the sea after some time in captivity, requires a period to “reshape” his voice and to learn to effectively communicate again with his fellow dolphins.

Communication issues are among the growing list of things like sound deprivation, ulcers, skin cancer, isolation, boredom that affect dolphins in captivity.