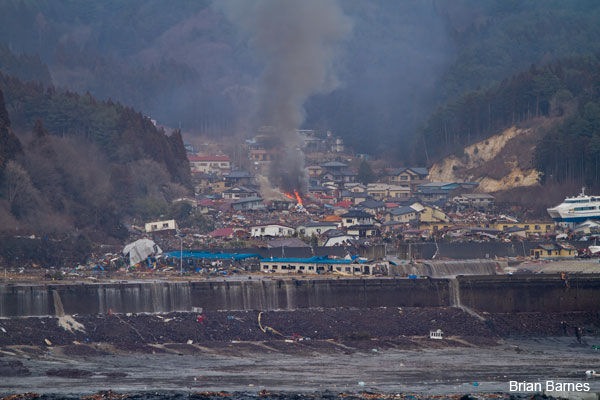 As we reported yesterday, volunteers from Dolphin Project and Sea Shepherd were in Iwate Prefecture, which was one of the areas hit the hardest by the earthquake and tsunami.   They were monitoring the Dall’s Porpoise hunts when the earthquake hit.  Thankfully, today we can report that they are all safe, and on their way home!

My son Lincoln, the DolphinProject team and I have been on the phone and e-mail with them all day trying to get them out.  They have gone through a horrible ordeal, witnessing death and massive destruction.

After the earthquake hit, both teams headed for the mountain overlooking the city of Otsuchi.  The tsunami hit almost immediately after Brian’s last video post,http://media.causes.com/ribbon/1032459.  They watched in horror as the tides rescinded and then came back with such fierce velocity that the city was quickly submerged.  When it ended, they descended into absolute turmoil.  The city was ravaged – cars toppled, houses and buildings totally destroyed.  Bodies were strewn about – one in a tree, others in cars, several in the wreckage.  We can’t begin to imagine how horrible it must have been.

At one point, they spent hours trying to save a woman they were never able to reach.  Floating on a piece of debris in the harbor, she was too far out and they didn’t have rope or any other equipment.  The two teams then “borrowed” an abandoned fire truck, called for authorities and used the loud speaker to call out to boats in the distance.  At one point, 2 boats came close, but then abandoned the effort.  She floated off, out of sight.  We pray one of the boats found her.

It was impossible to drive, so the teams opted to walk to Tono, roughly 30 miles away.  All along the way they ran into locals, who in the midst of their own nightmares, went out of their way to help, offering food, shelter and complete compassion.  Imagine – at this dire moment when they are facing such loss and an uncertain future – they reach out to complete strangers and offer their help.  We are so grateful to them.  Several times our volunteers were given rides towards Tono.

When the teams emerged in Tono, news was breaking about a “possible” nuclear meltdown.  With one, then two and now three reactors reportedly failing, and family and friends in a panic, we all agreed they had to get out of there.  If all goes well, we hope they will all be home tomorrow.
The people living in the area don’t have that option.  Our hearts break for what they will have to endure over the coming days, weeks, and likely months.  I know I’ll be back to do what I can.  If you can, please donate or find a way to help with relief efforts.  Here’s a good site where you can find an organization that you feel comfortable with:

Causes has also been raising money and you can give there:
http://www.causes.com/campaigns/154523

Sadly, the news out of Taiji is no better.  Although it is located well away from the epicenter of the earthquake, they did experience swells from the tsunami.  Sadly, we heard that all 24 dolphins being kept in sea pens in the harbor died as they were thrashed against the rocky coastline.

This is a time to come together.  To help one another and heal.

Please do what you can.  We’ll no doubt have more to report in the coming weeks.

Thank you all again for your concern and support.  It is appreciated more than you know.