Cove Update and Goodbye for Now

Home/Blog/Japan/Cove Update and Goodbye for Now 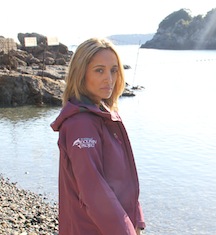 Note:  Tia Butt is one of our stalwart volunteer Cove Monitors, returning to Taiji on her own time and her own dime to help us in letting the world know what is happening in Taiji and letting the Japanese government know we are watching what they are doing there.  She is a real dolphin defender!  As she leaves, it will be a few days before a new Cove Monitor arrives here to take her place. – Ric O’Barry

The past few days have been a real roller coaster of events, with scenes that I have never seen here before.  After a few days of peace since the back-to-back slaughter days of the pilot whale and Risso’s dolphins, on Tuesday a pod was found fairly early around 7:30AM.

We saw the dreaded familiar sight of a drive formation, and I moved position quickly to Takababe Mountain, getting ready to face another slaughter here.  I have never seen a drive like this before.  These dolphins were fighting so hard, and the banger boats could not gain control of the dolphin pod and kept losing them.  I could see the dolphins surfacing as they were trying to get away from the hunters.  One moment they were heading north, and then they went south, and then towards the shore.  The banger boats looked like they were losing control regularly.  The dolphins were at a point where I felt they could not escape – I was preparing myself for a slaughter, made my usual preparations mentally, and was ready to update the social media on what was about to happen again in the Cove.

But after two hours up at the Takababe Mountain overlook watching these scenes of dolphins continually evading the dolphin hunters, I felt something that I have never felt up at this point.  I felt there was hope.  I could see these dolphins were not making this drive easy for the dolphin killers – they were strong dolphins, that were giving as good as they got.  My heart sank again when I saw that some fishing boats had actually joined the banger boats to assist them to try and get this pod.  They were all lined up one minute looking like they were in drive formation, and then the next minute they were all facing different directions, and looked like they had no idea where they were.

I had a real mixture of emotions of “will they get away?, won’t they get away”?  As I have said the dolphins were at a point in approach to the Cove where I have never seen dolphins get away before, but after a five-and-a-half hour battle, my dreams for that moment came true, and the dolphins made it!  They got away, the banger boats and the killers all gave up and came back to the harbor with nothing.  A sweet sight I will never forget – it overwhelmed me so much, that I had to sit at the Cove afterwards and look at how peaceful it was, and I was so grateful that things didn’t turn out differently.

That moment that I was sitting there, if the hunters had got the dolphins in, the dolphins would be getting slaughtered.  But they were not – they were now swimming free, and I was looking at a quiet and peaceful Cove with blue waters.

Yesterday, I woke up feeling a bit sick.  I knew that the hunters would be frustrated.  They would be eager and determined to get dolphins.  I knew it.  They sweated it out for five-and-a-half hours the day before, wasting fuel, time, and energy for nothing.  Tuesday’s feelings of joy and relief had disappeared, a new day had started, and sadly feelings of relief and happiness are short lived here.  The weather was a perfect day for a dolphin hunter, the sea was calm, no wind, and I had a bad feeling.

Almost exactly the same time as Tuesday, I could see five boats on the ocean chasing dolphins, around 7:30AM.  They were not too far from the Taiji shores, and I could see they were chasing dolphins just with the naked eye.  They chased this pod (and some of them did get away), but I could see the remainder of the dolphins surfacing regularly, and soon enough the killers were driving them towards the harbor.

The next four or so hours were unbelievable.  The killers could not get control of these seven or so dolphins.  They were in between the harbor and the Cove area, and the dolphins did not and would not let themselves be bullied or pushed into the Cove.  They were just past the harbor area, and the killers eventually had to put down an extra net attached to banger boats at this point, to try and drag the dolphins into the Cove.

They were banging their poles so hard, so fiercely, I have never heard them so loud, so aggressive.  And to my complete and utter amazement, these dolphins put up such a fight; they swam under the additional net that had been set up, and they swam under the boats (despite the banging), and they got away not once, not twice, but four times!!!

I thought I was dreaming.  At one point they even got more towards the open water, but they were surrounded by an army of banger boats and skiffs, all banging, all going crazy, with the killers were shouting their radio controls so loudly and the banging was relentless.  But these seven Risso’s dolphins were even more relentless.  I did see one young dolphin also within this pod, and they all fought so hard, I couldn’t believe my eyes.

After a five-hour battle, the hunters finally got the Risso’s into the Cove.  They then netted them quickly, and they used extra nets, as they knew these dolphins were clever enough to get away fast.  They pushed them in quickly, and I heard them die – they really did fight so hard not to be under those tarps.  I feel so sad as I write this remembering how much they battled until the very end.  And for what?  So that a few people can eat their mercury-laden meat that is not even fit for human consumption?

The hunters spent hours to get seven dolphins into the Cove; they used so much fuel, even the day before, when they were chasing the other pod for 5-and-a-half hours.  They really need to give this barbaric trade up.

I have a high suspicion that these dolphins were part of the same pod as Tuesday’s drive.  Of course, there is no hard evidence, but they were Risso’s dolphins yesterday that fought so hard, and then the same today, but with a totally different awful outcome.

There have been many Risso’s dolphins slaughters here recently, so I wonder if these are part of the family members hanging around these shores.  Of course, that worries me,  as I said today part of this pod escaped, but where are they?  Are they around these shores wondering what has happened to their pod mates?  Sounds crazy, but it’s not.  Dolphins travel with their families, with their pods, and they are extremely loyal animals.  That is one of the reasons I love them so much.

Today the waters were calm, so I was nervous still wondering if any of the ones that escaped yesterday were around the shores, but thankfully the hunters came back with nothing.

After almost four weeks, I now leave Taiji.  I may come back this season – I’m not sure yet – however, I will always come as long as I am able until the end of these terrible hunts.

A huge part of me is always left behind in Taiji, and again I sat at the pebble beach today at the Cove before I left to have a moment and to remember and be close to all the tragedies that have happened here, and said my goodbyes with a few tears!

I am proud to be representing Ric O’Barry’s Dolphin Project, and for Ric himself of course, a true hero for myself and for every single dolphin on this planet, captive or free.

Thank you for all your support!