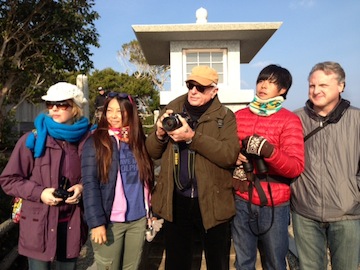 Terran came to Taiji with other Save Japan Dolphins activists last Sept. 1st.  He is now back in Taiji as a volunteer Cove Monitor for us, and like most of our volunteers, is paying for his own expenses.  Terran has also generously donated some professional camera equipment to our monitoring program.  I am always astonished and very humbled by the amazing generosity of our volunteers.  I welcome Terran in our ongoing effort to stop the Taiji dolphin hunts.  – Ric O’Barry

So how does a computer programmer find himself fighting against dolphin hunting and captivity in southwest Japan?  My name is Terran Vincent Baylor, and it all started for me many many years ago as a child in San Diego.  SeaWorld was in the culture there, and as such I loved to watch dolphins, whales, sea lions, penguins, and sharks – basically everything in the park fascinated me.  I even had fleeting moments of being a dolphin trainer.  I soon developed curiosity for computers, and, well, my life was set in motion.

Like most people – I always believed what the trainers and employees provided as education; never did I believe they would lie.  Was told many lies – which I am now aware of – such as the dolphins are much safer here without sharks attacking them, or they were happy living there and are very healthy.  It always was strange to me that they would be happy in such small pools while the ocean was so vast.

Years later I noticed a hotel on the Big Island of Hawaii had a swim with dolphins program: “Dolphin Quest” I believe.  My wife was hesitant thinking about them as if they are in a zoo and forced into being there, so it wasn’t high on our list – but still I was intrigued.  As we were having a great dinner out, a nice women at the next table started talking about this dolphin experience and said it was life changing, so amazing that we really should look into it the next day.

We were excited but also a bit afraid something would happen, as if the dolphins would attack us.  We told ourselves we would watch for a little while and see if it was ok – and after a while of watching kids and adults go through the experience, and saying it was great – we paid the money, and we were suiting up soon after.  Instead of telling you what I experienced, I will tell you what they had the dolphin do…  The dolphin, which sadly I have no memory of the his/her name, was asked to swim by us while we touched it’s slick smooth tight skin, was asked to allow each person in the group to hold it in the water, was told to make noises out of the blowhole, was asked to allow us feed it a fish, and finally allow us to get a picture beside him/her.  So why do you think I described it from the dolphins’ point of view?  Because, that is all I experienced – an animal ordered to “provide an experience” and nothing more.  Most people were happy with this, but all I felt was depression and sadness for the dolphin ordered to interact with humans for nothing more than food.

As humans on this planet we tend to believe WE are the only important intelligent creatures that exist and that WE have the privilege of controlling other animals to do things we cannot or are unwilling to do ourselves.  Sounds very much like slavery, and this premise has been used in many cultures over history and continues today in many forms.  That depression and sadness I felt was pushed back for a long time, until I like so many others watched The Cove.  It is truly unfortunate that others have been documenting whaling and dolphin killing for a very long time and not getting much traction.  Would like to point out Hardy Jones and Ric O’Barry for taking a hard line on this huge business and trying to get this information out to the public.

Signed up for “Dolphins Day” with DolphinProject.com and had the most amazing experience with like minded people – which has changed WHO I AM as a human on this planet.  After all the great experiences in Japan with so many amazing Japanese people, I am confronted with utter sadness at the insanity that still exists here.

My first Taiji slaughter experience was emotional, gut wrenching, and the final sheer sadness.  Reviewing the photos AFTER knowing what happened to this dolphin pod family – and they WERE A FAMILY with a young child – was exactly how I believe Schindler felt looking at a list of Jewish people he knew were now dead.

Please…  Please…  Do not buy a ticket to marine parks.  Most marine parks need a steady supply of dolphins and whales to meet their growing empire.  Without Taiji Fishermen’s Union being able to sell dolphins and whales for captivity they would not be able to sustain the high costs of running their boats.  A dead dolphin is worth $600; a live one for a marine park is $150,000 or more.

Taiji is now my steady travel destination until the Taiji dolphin hunters end their hunts!