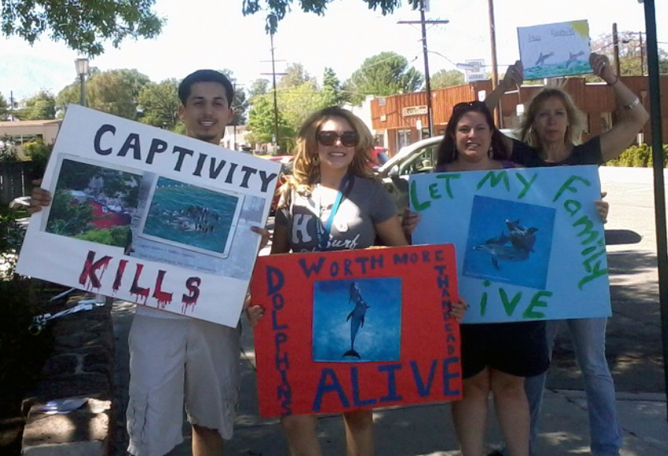 Ric O’Barry’s Dolphin Project is urging Costco, the warehouse store giant, to discontinue selling tickets for excursions that take their customers to swim with captive dolphins at Six Flags Discovery Kingdom in Vallejo, California.  We were alerted to this problem by one of our supporters, Cynthia Fernandez.  We thank her for her vigilance!  She’s been gathering signatures against the Costco offer and plans to present them to the company.

Even the best of these captive facilities harm and kill dolphins.  Many wild dolphins die during capture operations from injuries and physiological stress.   Six Flags Discovery Kingdom tried to purchase and import several dolphins from Taiji’s bloody drive hunts in 1992, but this import was blocked by invoking requirements under the US Marine Mammal Protection Act.

Captivity for these wide-ranging and sentient animals cannot replicate the diversity of the wild ocean and their many close connections with their family and pod.  Most dolphin species do not do well in captivity.  Recently two scientists, former trainers of orcas at Sea World, reported that of 193 orcas caught for captivity, only 41 now survive.  The average age of the ones that have died was only 6.6 years, a fraction of the lifespan of wild orcas which can live 50-70 years or longer.  Even for dolphins that live long in captivity, the sensory deprivation and social sterility of captivity is akin to a human prison.

Costco offers these excursions because they are very popular with the public; however the public remains largely unaware of the fact that dolphins suffer and die in order to entertain them.  Surely, the vast majority of Costco’s customers would be horrified in light of this knowledge.

We plan to inform our supporters and media outlets of the results of our efforts to encourage Costco to stop offering captive dolphin excursions.  We will encourage our members and the public to exclusively support those businesses that have dolphin-friendly policies.

If you would like to help, we urge you to write Costco and urge them to drop the swim-with-dolphins ticket sales for Vallejo’s Six Flags Discovery Kingdom dolphinarium:

You can e-mail or call in comments to Costco here:

Thank you for your help in protecting dolphins!