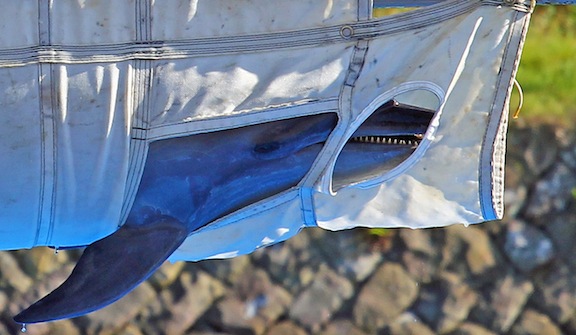 (Our Cove Monitor Cynthia Fernandez teaches school in the San Francisco Bay Area and has a great presentation for students about captivity for dolphins.  This is her second time to come to Taiji for us as a volunteer, paying her own way.  In this blog, she tells about the captive cetaceans in Taiji that are so key to the finances of the dolphin slaughter.   I thank her and our many other Cove Monitors for their dedication and help!  — Ric O’Barry)

On one of the rare Blue days that have happened while I’ve been here, my fellow Cove Monitor volunteer, Tia Butt, and I decided to go down to the harbor to see if anything was happening.  Sometimes, you will see a dolphin being transferred.  When a dolphin transfer is going to happen, you see the crane and a truck with a large crate waiting near the water’s edge.  You’ll see lots of activity at the sea pens in the harbor as the workers prepare the dolphin for transport.  They need to lift it out of the sea pen, place it in a sling by the side of the skiff and drive it over to the waiting crane.  There are always lots of police present, as well.

Today was a little different.  We could see a little activity at the sea pens but not nearly as many workers as usual.  A crane and flatbed truck were waiting at the water’s edge, but something was missing: the crate.  We quickly walked from the harbor, past the Fishermen’s Union to the area where the crane was and could see a skiff coming our way.  However, there was no crate and no police.  Strange.  Respecting the yellow lines that mean “Do Not Cross” while getting as close I could, I watched them load a bottlenose dolphin into a sling.  Something wasn’t right – there was no movement coming from that dolphin.  As I focused my camera in on the dolphin’s face, I could see why.  It’s eyes were half shut and it’s mouth was slightly ajar…it was dead.

A dead bottlenose dolphin is lifted out of a sea pen in Taiji harbor for disposal.  Taiji dolphin hunters know there are plenty more where this one came from.  Photo by Cynthia Fernandez.

We watched in horror as they callously loaded that poor dolphin onto the back of the flatbed truck, wrapped it up in a blue tarp and drove away.  I’m not sure where they took the body.  I’m sure they were disappointed as a bottlenose dolphin is the most valuable species to them in terms of sales to marine parks.  They probably thought of nothing more than lost yen as they loaded that body on the truck and wrapped it up.

I paused for a moment to think about what that dolphin had endured. I thought about how it and its family had been driven for hours, trying to escape the deafening sounds of the banging on those banger poles.  Driven to the point of exhaustion into that Cove from which there is no escape.  I thought about how that dolphin had been manhandled by the trainers, forced into a sling, and carried away while the rest of its family were being brutally murdered.  I’m sure that dolphin could hear the cries of its dying family members. I thought about how it had been dumped into a tiny sea pen, alone and confused.  How it had been offered dead fish but, most likely, refused to eat.

How that dolphin grew weaker and weaker as the days passed and probably lost the will to live.  How that dolphin was a victim of capture shock.  I also thought that was probably the best outcome for that dolphin, given the circumstances.  My personal opinion is that it is better off dead than having to be “trained” to perform ridiculous tricks for the entertainment of humans and spend the rest of its life in slavery.

The dead dolphin is wrapped in the conspicuous blue tarps used in Taiji to hide the truth from the Japanese people.  Photo by Cynthia Fernandez.

I wished I could turn back time.  I wished that beautiful dolphin could be swimming free in the ocean with its family, never going near this place called Taiji.  I hope that somewhere that dolphin is swimming free with its family, that there’s a place where all animals go who have been abused and murdered by humans.  A place where they can all be free and safe, where they are out of the reach of greedy, heartless humans.

Speaking of greedy, heartless humans…we decided to visit the Taiji Whale Museum that day to check up on two recently transferred Risso’s dolphins.  We had witnessed their capture just days ago as well as the slaughter of their family members.  We had seen them lifted into crates and driven to the Whale Museum where they will spend the rest of their days “performing” for humans.  I flashed back to the dead bottlenose – I do believe he/she is better off.

With mixed feelings, we approached the Whale Museum, not wanting to support it yet wanting to check on the captives.  We also wanted to try to give those poor captives some positive energy, to try to let them know we were so vey sorry for everything that had happened to them.  We were reluctantly allowed to enter and watched closely the entire time we were there.  We went through the display area very quickly, getting a history of whaling and seeing the horrifying display of dolphin and whale embryos in jars and bottles in various stages of development.  I’ve never seen such bizarre things as I saw there.

We went outside to the captive area.  I was saddened to see the bottlenose dolphins and pacific white-sided dolphins in tiny, concrete tanks.  Not much room to swim.  When we approached their tanks, they came over and wanted to interact with us.  There were signs everywhere warning us not to touch them as they can bite.  I think I would bite too if I was confined to a tiny space like that!  We then saw the larger lagoon area where the larger whales and dolphins are kept.  A pilot whale, a false killer whale, and Risso’s dolphins, including a mother and a calf, were all swimming in the lagoon.  There were several sea pens with various dolphins in them.  Then, in the very back pen, we spotted two Risso’s dolphins spy-hopping together, looking incredibly sad and confused.  It was so sad to think about what those incredible animals had endured.  Unlike the bottlenose dolphin, they had survived.  Again, my own personal opinion is that the bottlenose was in a better place.  Those two Risso’s stuck by each other’s side the entire time we were there.  I hope, at the very least, they are able to find some comfort in being together.

The very last tank we visited was a walk-through, see-through tank with four dolphins in it.  I stopped to look at the poor dolphins.  One dolphin swam over to me and just hung motionlessly in the water, us looking at each other eye to eye, our eyes no more than four inches apart.  She began to click and whistle to me.  How I wish I could have communicated with her.  I would have told her how sorry I am for what humans had done to her and her family, that not all humans enjoy seeing dolphins in captivity and that there are many people fighting to end this brutal slaughter and end dolphin captivity.  Unfortunately, it was too late for her.  She swam away, and I thought about her some more, my back to the tank.  Then, I heard the familiar clicks and whistles.  She had returned and was trying to get my attention.  Ours eyes locked once more and she clicked and whistled at me.  I tried to talk to her – my words seemed like a primitive language compared to her complicated clicks and whistles.  I hope she understood that there are people trying to help her and end this craziness.

However, you do have the power to help end this slaughter!

Don’t buy a ticket to any facility that holds dolphins captive but, most importantly, spread the word!  Talk to your friends and family, share information on social media, and attend protests…whatever you can do to spread the word!  Until we can end the show and empty the tanks, I believe the slaughter will continue.  So, please do your part to help.

Together, we can end the show!