Building a Bridge across the Flensburg Firth

Home/Blog/Campaigns/Japan/Building a Bridge across the Flensburg Firth 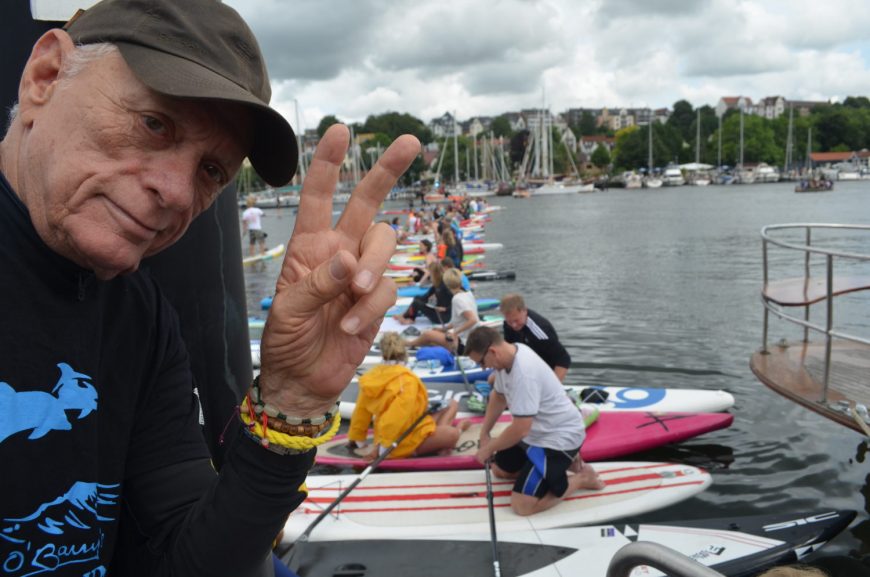 It was quite the sight in the Flensburg Firth.

One hundred and thirty-three standup paddle boards were placed side-by-side, forming a 160 meter long bridge. In an effort to draw awareness to the dolphin slaughter in Taiji, Japan, two people – Ric O’Barry and marine mammal scientist Dr. Andreas Pfander – had to get from one side of the Fjord to the other by walking/balancing on this bridge of paddling boards without falling into the cold water.

It would be a never-before-seen achievement to be entered into the 2016 Guinness Book of World Records. Unfortunately, Dr. Pfander fell into the water at the sixth board and was out.

Ric however, succeeded in crossing the Fjord.

It’s all about keeping Taiji in the news. It’s what we do” ~ Ric O’Barry, Founder/Director of Dolphin Project

Each year from approximately September to March, a brutal slaughter of multiple species of dolphins takes place in Taiji, Japan. The Academy award-winning movie “The Cove” featuring Ric O’Barry was based on this slaughter. Dolphin Project will, once again, be on the ground in Taiji for the entire six months, documenting the hunts via live streaming, blogging and social media.

Your voice counts! September 1 is Japan Dolphins Day. Click here to learn more and participate in an event in your city.

Want to lend your support on the ground in Taiji? Learn more about Dolphin Project’s Cove Monitor program.

Interested in donating to the longest-standing dolphin advocacy organization in the world? Click here to make a tax-deductible donation.