Brutality in the Cove as Striped Dolphins Slaughtered 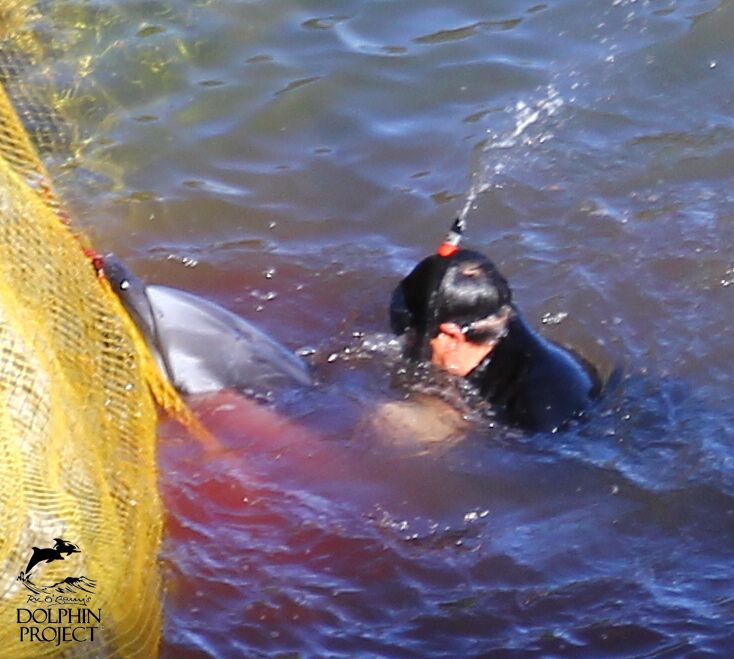 October 19, 2016, Taiji, Japan: After 14 days where no dolphins were killed or taken captive, all that changed today. At around 5:47 a.m., twelve banger boats went hunting for dolphin and just over two hours later, at approximately 8:10 a.m., the hunters found their quarry.

Pod of striped dolphins are netted into the cove.
Credit: DolphinProject.com

The pod was medium-sized, consisting of approximately 35 dolphins, and, despite the mammals’ desperate attempts to evade the boats, the drive progressed quickly. They were no match for the hunters, who repeatedly terrorized them by banging on poles, and later, throwing lead weights into the water, creating an acoustic wall of horror for the unsuspecting dolphins.

As Dolphin Project Cove Monitors live streamed from The Cove, it became apparent that the pod were striped dolphins, or Stenella coeruleoalba (from Latin, meaning “dark blue” and “white”) referring to the dramatic stripes on their bodies. It would be the first slaughter of this species for the 2016/17 season, almost mirroring last season’s first striped dolphin hunt (which took place on October 30, 2015). Being a pelagic species, preferring the waters of the open ocean, the drive would have been particularly terrifying.

Once the pod were netted into the cove, the true – and barbaric – nature of Taiji’s dolphin drives began to unfold.

When the dolphins realized they were trapped, they began to panic. Some threw themselves on the sharp rocks, while others became entangled in the nets. They were vocalizing with one another, in absolute panic. It was horrifying.” ~ Daniela Moreno, Dolphin Project Cove Monitor.

Live striped dolphins panic as they are tied by their tails and dragged to their slaughter.
Credit: DolphinProject.com

The hunters began tying live dolphins by their tails, drowning them as they were dragged underneath the tarps to their slaughters. Once there, the sounds of frantic tail slapping could be heard as the animals lost their lives. They were killed in batches, and as the water ran red from the blood of the dead, the remaining dolphins were forced to swim in it – knowing full well what had just taken place. Dolphins that were caught in the nets were subject to equally brutal treatment, lifted out of the water and thrown towards the killing cove. Skiffs were observed running over live animals.

The scene couldn’t be more horrifying. At one point, after the majority of the pod were slaughtered, a solitary dolphin was spotted swimming towards the nets. Two skiffs began chasing the animal, and for several minutes, the dolphin swam for its life in a sea of blood, trying to escape the boats. Finally, it too was slaughtered.

While the killing was done under the cover of tarps, the extreme and repeated cruelty which took place here today was done in full view of our cameras. This isn’t culture and it isn’t tradition. This is shame.

Three skiffs brought out the dead bodies, also hidden under tarps, and they were taken to the butcher’s where they would be processed.

Tarps cover the bodies of the dead dolphins.
Credit: DolphinProject.com

Dolphin Project has always believed that high levels of mercury in dolphins captured in the cove makes meat consumption a dangerous habit for the local people of Taiji. Previous tests on striped dolphin meat have revealed the presence of three contaminants: mercury, PCB (polychlorinated biphenyls) and radioactive cesium-137, with mercury testing higher than the Japanese government’s recommended level of 0.4 parts per million. More recently, a piece in The Japan Times contains an admission from fisheries cooperative official Yoshifumi Kai, acknowledging that tests on local animals have yielded high mercury levels.

The view from the hill: A blood red cove as entire pod of striped dolphins are slaughtered.
Credit: DolphinProject.com