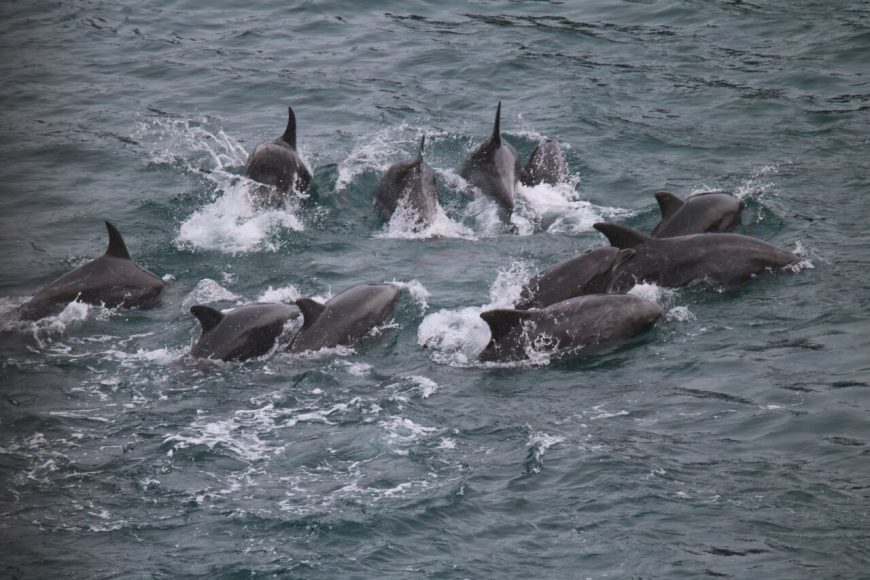 Day One – September 16, 2016, Taiji: After a few days where dolphins were able to successfully evade hunters, today, not one, but two pods were driven into the cove. Three hours after the hunts commenced, around 8:20 a.m. Dolphin Project Cove Monitors noted the familiar black smoke as a large pod of dolphins was being chased.

We saw seven banger boats coming from the south. They were moving so fast, we immediately thought it could be the pod of dolphins which escaped yesterday.” ~ Daniela Moreno, Dolphin Project Cove Monitor

The pod turned out to be bottlenose dolphins, 80-100 in total – a huge payday for hunters. Dolphin Project live streamed for over two hours, documenting as the agitated and fearful mammals slapped their tails against the water. Youngsters swam close to adults. To add to the chaos, skiffs kept going in and out, making sure the nets would be drawn tight enough to prevent escape.

Along with the slaughter of multiple species of dolphins – 1820 in total – approximately 150 bottlenose dolphins have been “pre-sold” to non-JAZA aquariums in Japan and overseas.

Around 11:30 a,m., team member, Yoshi began running to the other side of the lookout point as a banger boat abruptly left the cove. Our worst fears were confirmed when another pod of dolphins was pushed into the cove – approximately 18-20 pilot whales. Juvenile dolphins were spotted swimming alongside adults in both pods, and one very young pilot whale was noted.

Juvenile and adult bottlenose dolphins huddle together after being driven into the cove, Taiji, Japan
Credit: DolphinProject.com

Much of the violence comes from the drive itself, where some dolphins don’t even make it to the cove. The hunts are so stressful that pregnant females can abort their calves and young and old can’t always keep up the fast pace.” ~ Ric O’Barry, Founder/Director of Dolphin Project.

Pilot whale pod in chaos after being driven into the cove, Taiji, Japan
Credit: DolphinProject.com

At about 12:00 noon, both pods, separated by nets, were left in the cove. Six hours later, at 6:00 p.m. Taiji time, no hunters or trainers returned. Presumably, the dolphins will be left overnight to await their fate. *See video below