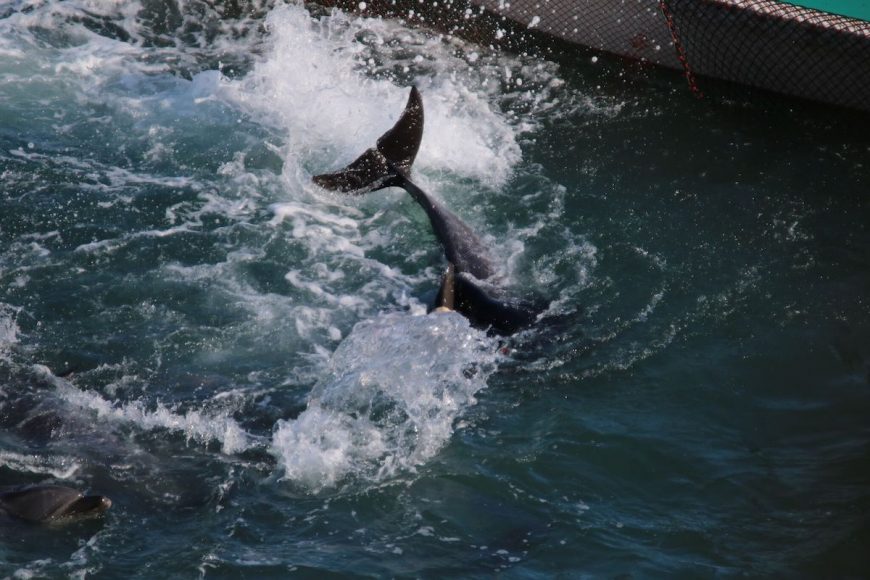 Taiji, 1-22-17: It’s been 63 hours since a 250+ strong pod of bottlenose dolphins were driven into the cove. They have been terrorized, manhandled, starved and dehydrated – so orders could be filled for aquariums and marine parks throughout the world. As of 1-22-17, a total of 53 dolphins have been taken captive.

The hunters must have rejoiced at such a payday. For every face that registered terror, a dollar value would have been assigned to them. The ones considered “worthy” for show purposes – many of whom were very young – were ruthlessly forced into nets and dragged away from their mothers and other pod members. The ones considered “rejects” were tagged and separated from the main group in order that they not be inspected at a future time.

Extreme aggression by divers as dolphins are wrangled away from pod for “life” in captivity, Taiji, Japan.
Credit: DolphinProject.com

Dolphin Project Cove Monitors live streamed on Facebook for seven hours as dolphins were brutalized into submission. Then, at around 2:20 p.m. local time, divers and trainers left for the day, once again, turning their backs on the pod. The dolphins were photographed listing on their sides, spy-hopping and swimming in tight circles around one another as their suffering dragged on.

Dolphin being taken away for “life” in captivity, Taiji, Japan
Credit: DolphinProject.com

We estimate that 100 dolphins have been sorted and rejected and approximately 50 are still to be assessed whether they will be suitable as captive performers. At the time of this writing, both groups of dolphins are still being held captive. We wonder how many dolphins have already perished from such extreme abuse?

Their horror will persist tomorrow as the captive selection process continues.