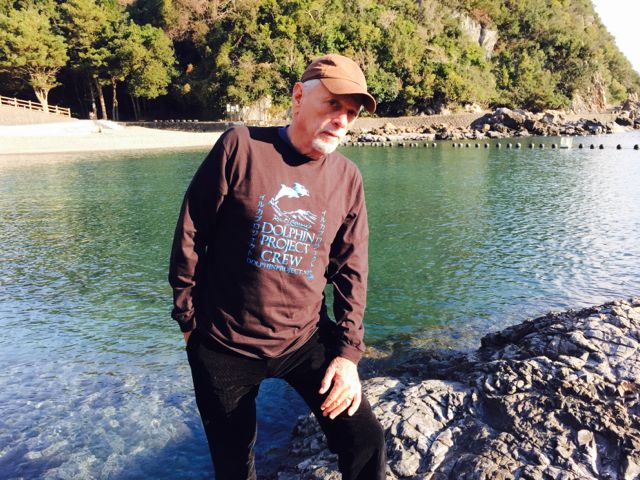 Following his arrest on August 31, 2015, for allegedly not carrying a passport, Ric O’Barry, Founder/Director of Dolphin Project was released after spending the night in jail by Shingu Police a short time ago with all charges against him, dropped.

O’Barry was arrested in the town of Nachikatsuura, a town located in Wakayama Prefecture, Japan at approximately 8:30 p.m on Aug. 31,  on suspicion of a violation of the Immigration Control and Refugee Recognition Act of Japan. Several hours after impounding his vehicle, local police located the passport inside the car.

O’Barry, who travels to Taiji, Japan every year to document the start of the dolphin hunting season, was forced to miss the September 1, deadline this year. Tired, but in good spirits, he said over the phone that his arrest, “only brought more international media attention to the plight of dolphins in Japan.”

Toshio Fujita, a Shingu police official, would only tell the Associated Press that the activist, “no longer had to be kept in custody,” but he would not elaborate on the release.

O’Barry believes that the combination of elevated pressure on Taiji, and Japan’s, “extreme, right-wing, radical government,” is currently placing Westerners at risk. “They’re trying to get all Westerners,” he said, “and the orders are coming from higher up — not the local police. We have always had a good relationship with them.” Japan’s penal system is notably harsh. According to a paper by Harvard Law School’s Ramseyer and Rasmusen, in 1994, Japanese district court judges convicted 99.9 percent of all defendants. The paper also suggested that high conviction rates in Japan could, “well reflect innocent convictions.”

Free to focus on the mission again, O’Barry had only one thing on his mind, “I gotta get four hours sleep and get back to the cove,” he said.

Dolphin Project Cove Monitors are on the ground in Taiji throughout the entire killing season to document and disseminate information to the rest of the world. O’Barry has been traveling to the cove for the past 13 years, multiple times per season. Please consider joining our team as a Cove Monitor, or learn how you can support our mission.

Ric O’Barry’s Dolphin Project is a non-profit charitable organization, dedicated to the welfare and protection of dolphins worldwide. Founded by Richard (Ric) O’Barry on Earth Day, April 22, 1970, the organization aims to educate the public about captivity and, where feasible, free captive dolphins.

The mission of the Dolphin Project is to end dolphin exploitation and slaughter, as dolphins are routinely captured, harassed, slaughtered and sold into captivity around the world – all in the name of profit.