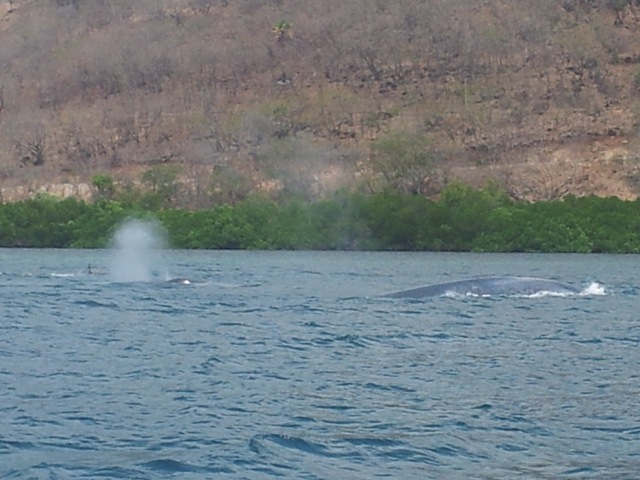 (Updates with further tweets from @FemkeDenHaas)

The island of Lembata, in Indonesia, is a recognized area where whales and dolphins are continuously killed under the name of “adat” (culture), despite the fact that dolphins are a protected species in Indonesia. The established quota, familiar with the locals, is set at “only” two whale kills per year.

The village of Lamalera on the island of Lembata (on Flores), is known as the home of traditional whale hunting. This hunt is allowed under the IWC (International Whaling Commission) because it is conducted in a “traditional” manner. The problem is, this practice is never followed. Locals catch what they can, how they can, and do so now with outboard speedboats. Dolphins, whales and manta rays are all a part of their “take”. Now, eight critically endangered blue whales have entered a bay on the north side of Lembata Island — near the village of Jontona and have become trapped due to tides. Of the original eight animals, five have been able to return to open sea, but three whales remain trapped. They have now trapped for four days.

JAAN team members have just reached the area and and joined efforts with local organizations to attempt to help the whales back to the sea. Time and patience are needed as we await the appropriate tides. Local villagers from Jontona  have helped with the rescue by using their canoes to guide the whales back to open ocean.

Femke Den Haas with Jakarta Animal Aid Network is tweeting updates as efforts to save the whales unfold. She is calling for the Indonesian Navy to intervene. This story will update:

Why the family #bluewhales trapped in lembata need our attention and rescue;they swam in bay,but can\’t get out due to low tides small gate — femke den haas (@femkedenhaas) October 22, 2014

We r extra worried because of the area where the whales are..the locals call the whales \’a gift of god\’..for the wrong reasons though.

There are joint efforts being done now to return the whales to ocean…lets hope the whales can return home safely! #savewhales — femke den haas (@femkedenhaas) October 22, 2014

One #bluewhale has died; a young juvenile male.team now prepare 20 boats to guide the remaining family out bay @jaan_indonesia #savewhales

3 whales with success guided ocean,2 still trapped,… the dead one is pulled ashore by locals wanting to consume the poor soul #saveshales — femke den haas (@femkedenhaas) October 23, 2014   (Correction: Earlier reports placed the whales near Lamalera. The whales are closer to the village of Jontona)

#omg!Really #speechless hearing news of whales approaching bay,they really care for each other! We humans should learn from them#savewhales

These highly endangered #blue #whales are still in trouble, rescue efforts are undergoing but too weak… we need help from #navy ! — femke den haas (@femkedenhaas) October 25, 2014

saving the worlds most biggest gentle giants… update from the field, now the last trapped #blue #whales approach the exit gate of the bay

Its getting dark and the whales are still not through the exit gate… Team has to continue tomorrow morning ((( #savewhales — Jakarta Animal Aid (@jaan_indonesia) October 26, 2014

The whales have been trapped for 8 days now.. today they were close to exit gate but swam under boats&returned..very frustrating #savewhales

We need to yet rent boats for another day..try create soundwall&keep trying but running out of resources #savewhales — femke den haas (@femkedenhaas) October 26, 2014

Thumbs up for the commitment and hard work of @jaan_indonesia @TukangKaceb in the field #savewhales <3 — femke den haas (@femkedenhaas) October 26, 2014

It looks like mum #blue #whale has left the bay… back to the open ocean, be safe @KelautanKKP @Angkatan_Laut @jaan_indonesia #savewhales

Operation #savewhales is done, whales all back to ocean now including the mum #blue #whale was was mourning for loss of infant @TukangKaceb — femke den haas (@femkedenhaas) October 30, 2014 It’s been a great week in Indonesia!

The amazing team at JAAN also helped rescue and release a dolphin destined for the traveling dolphin circus. 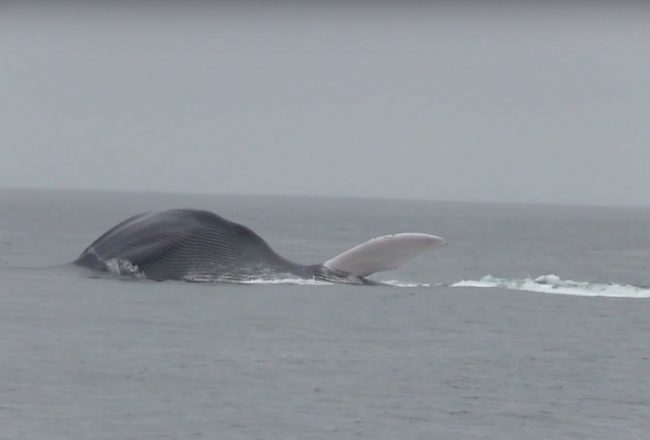 Breakfast seemed in abundance for this blue whale, spotted less than two miles from Monterey Harbor! Not only is it incredibly rare
read more