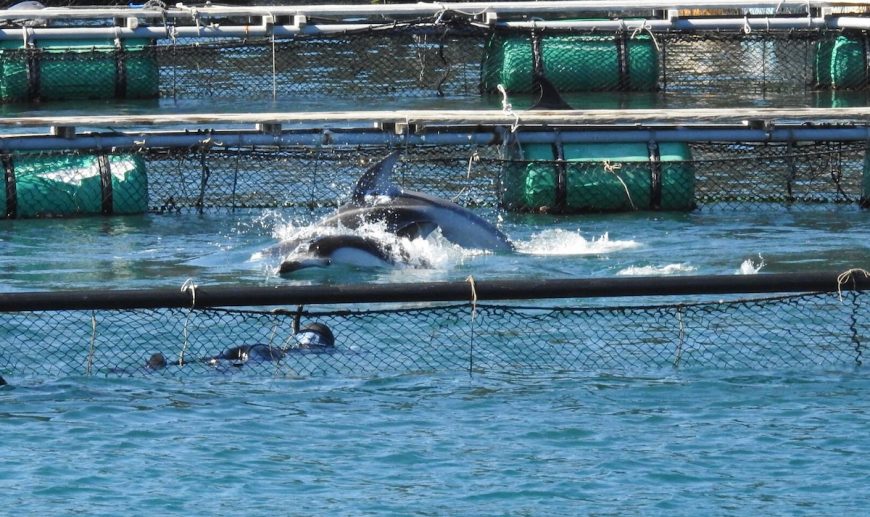 Taiji, 2-19-17: We were hoping to see the banger poles removed from the boats, in anticipation of the end of Taiji’s dolphin drive season – instead, we witnessed Taiji’s hunters hit yet another payday, with the capture of the first pod of Pacific white-sided dolphins. The boats went out at 6:25 a.m. and by 7:40 a.m. Dolphin Project Cove Monitors witnessed a drive in progress. By 8:50 a.m., hunters had netted a mid-sized pod, after a larger number of dolphins were allowed to go free.

The captive selection process took place offshore. One by one, skiffs took the struggling dolphins to the harbor pens, where they were measured, checked for sex (the dolphins were rolled over, their undersides inspected), and some smeared with a white “paint-like” substance, prior to being tossed into the enclosures. There were at least two babies in the pod, and they too, were taken captive, alongside their mothers.

Each dolphin thrashed, resisting their captors – some more, and some less. One in particular, a smaller juvenile, appeared to have something bloody in its mouth – possibly vomit as dolphins have been observed throwing up from the stress of the drive and captive selection.” ~ Terran Vincent Baylor, Dolphin Project Cove Monitor

We continued to live stream throughout this entire process, the violence of forcibly removing a sentient being from its family and environment caught on our cameras. And, as each dolphin was carted to their tiny enclosures, Taiji’s profits rose. It is easy to see where their commitment lies: with 100 bottlenose dolphins plucked from a pod of 250+ in January, and now, 20 more dolphins available to fill concrete tanks in marine parks and dolphinariums, the payoff is great.

The dolphin captivity issue is one of supply and demand: as demand increases for trained dolphins, whether to function as performers, interact in swim-with programs or otherwise serve to entertain, Taiji’s business of supplying dolphins to buyers throughout the world will flourish. And thus, the solution is equally simplistic: when people stop buying tickets to dolphin shows and swim-with programs, the industry will end.

Twenty Pacific white-sided dolphins, including two youngsters were dragged, thrashing, from their wild world into a new reality of fences and nets. A reality where their decision-making processes will be replaced by their need to eat, and navigate amongst a human world which dolphins have no ethical place in.

ACT NOW: Take the Pledge to NOT Buy A Ticket to a Dolphin Show