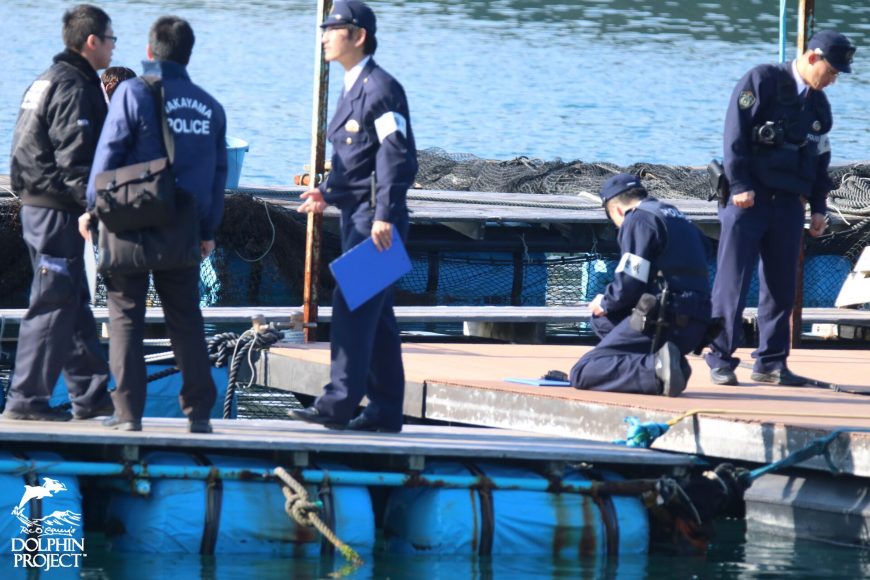 Taiji, 1/4/17: Several hours ago, Dolphin Project Cove Monitors noticed police activity at Dolphin Base, a captive dolphin facility in Taiji, Japan and were asked to leave. Detectives arrived shortly after. It was our initial belief that something happened to a trainer, or possibly a customer. Police did not say anything to us about the incident and we continued to be concerned.We learned through a television report and the online website, NHK News Web that (allegedly), nets were cut, resulting in the escape of four dolphins. We cannot confirm these reports, nor do we know the fate of the mammals.

While we are against keeping dolphins in captivity, we do not condone illegal behavior. Our Cove Monitors operate fully within Japanese law, documenting Taiji’s dolphin drive hunts for the Japanese people and the rest of the world to see – including the horrific capture methods and continued slaughters.

Our global campaigns are run with the utmost respect for local laws, with our ultimate goal to stop the abuse of dolphins. It is our hope that Taiji will ultimately turn into a tourist destination, where no dolphins are hunted or captured for display.

Every year from approximately September 1 to March 1, a notoriously cruel hunt of some of the most sentient and sensitive creatures on the planet takes place in Taiji, Japan, made famous by the 2009 Academy award-winning movie “The Cove.” During this period, fisherman, or more appropriately, dolphin hunters, “drive” the mammals to their capture or deaths via means of physical violence and acoustic torture. Ric O’Barry’s Dolphin Project Cove Monitors are on the ground in Taiji for the entire hunting season, documenting these drives for the world to see, and to take action.