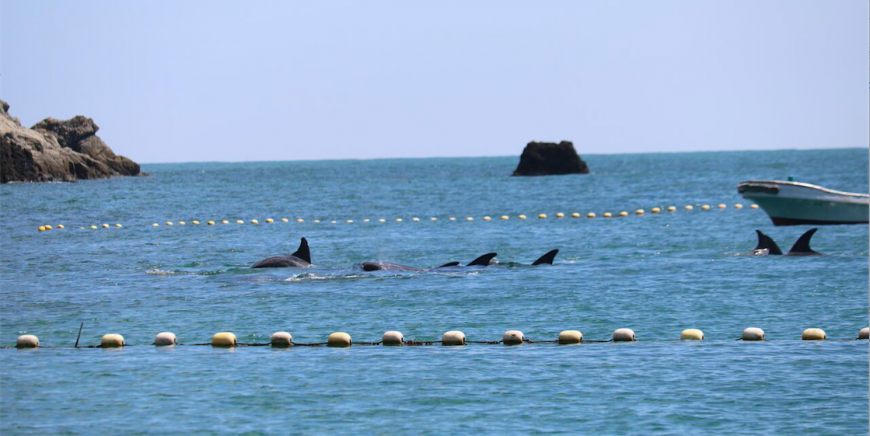 In an eerie resemblance of last year, almost to the day, the dolphins’ luck ran out when a pod of Risso’s were driven into the cove and slaughtered.

After hours of hunting, our hopes were high that it would be another ‘blue cove’ day. While there were previous drives since the 2016/17 season opened on September 1, the dolphins had managed to escape the hunters. Not so today.

Risso’s dolphins huddle together after being driven in
Credit: DolphinProject.com

Twelve hunting boats left at 5:30 a.m. Three and-a-half-hours later, at 9:10 a.m., I saw nine boats in formation, facing north. It took less than 15 minutes for the boats to reach the nets of the harbor. I ran to the sea wall, where I was able to witness a beautiful pod of Risso’s dolphins being pushed into the cove.” ~ Daniela Moreno, Dolphin Project Cove Monitor

As Dolphin Project live streamed from the cove, the world watched in real time as this once-robust pod of approximately 19 dolphins were, one-by-one, taken out, their lifeless bodies hidden underneath blue and gray tarps. The remaining Risso’s watched as the skiffs went by, dragging their dead pod members. A total of seven skiffs went in and out of the cove, and by 12:00 p.m., the slaughter was complete.

Having witnessed the dolphin slaughter for 14 years, multiple times per year, you’d think I would be desensitized to this. And yet, I am not. Each kill feels like the first.” ~ Ric O’Barry, Founder/Director of Dolphin Project

The hunters stopped to have lunch, and for the next 60 minutes, four juvenile dolphins were observed swimming in-between the nets. No adult pod members were visible as they had likely all been slaughtered.

One hour later, the hunters returned, along with three banger boats. Suddenly the remaining nets were pulled back, and the boats proceeded to push the dolphins back out to sea.

Juvenile Risso’s being released without the rest of the pod
Credit: DolphinProject.com

While this might seem to be a compassionate act, this couldn’t be further from the truth. With their smaller bodies, hunters don’t want to “waste” their quotas killing the youngsters, thus, they are released. However, in the absence of the support, protection and guidance from their elder pod members, their chances of survival are slim at best.

In past years, carcasses of dolphins have been witnessed by Dolphin Project Cove Monitors, these untold numbers never counted against Taiji’s quotas.

In total, approximately 19 Risso’s dolphins were driven into the cove, of which 15 were slaughtered and four juveniles were released.

It was a very sad day in Taiji, with the season only getting underway.