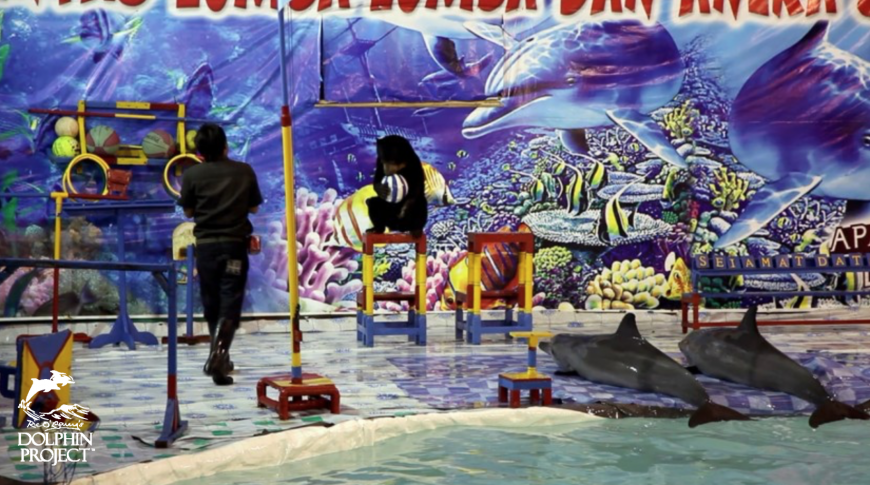 Balikpapan City, Indonesia: After many protests against the horrific traveling dolphin circuses in Balikpapan, the Mayor of Balikpapan City, Rizal Effendi, has undersigned a commitment to no longer allow any animal shows in the city, and keep it free from any forms of animal exploitation.

This is a very positive step. We commend Rizal Effendi, Mayor of Balikpapan City for ending animal exploitation in his city. We also want to thank our Indonesian team and partner organizations. There is still much campaigning to do to end the cruel dolphin traveling circuses and we look forward to the day that these dolphins can be returned to their home in the ocean.” ~ Lincoln O’Barry, Dolphin Project

Traveling circuses transport their captive animals from city to city, exposing the animals to extreme levels of stress and abuse. Dolphin Project has launched a major campaign in Indonesia to close these exploitative operations including a graffiti & mural art initiative, electronic billboards throughout Indonesia, digital ads at the Bali airport and a traveling educational puppet show.

Indonesia says NO to the traveling dolphin shows!
Credit: DolphinProject.com

Dolphin Project is working to lobby the Indonesian government to release the dolphins, many of whom were illegally poached from their ocean homes. While this is a great start, we need your help! International press continues to cover this issue, but we need to keep it in the news. Please sign this petition to end traveling dolphin circuses, and click the ‘Take Action Now’ banner below for other ways to help.