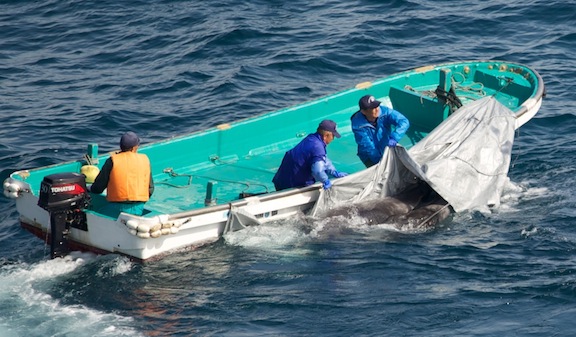 The previous day was raining, so the dolphin drive boats did not go out.  Weather here seems different than anywhere I’ve ever been.  One day is cold and rainy with zero visibility, and the next warm and clear skies.  What is predictable is the Circle-K having the coffee I like and being followed by police the minute I enter Taiji.

This day was warmer – very nice conditions.  I waited in the harbor, hoping the boats wouldn’t leave, but knowing this was a nice day that is dangerous for dolphins here.  Boats appeared all in line – focused.  Everyone has seen photos of these boats leaving Taiji harbor, and it looks the same each time.  Stomach was already getting tight…

Today at the lookout point (where we watch the boats leaving and keep an eye on them returning), it was just myself and one police car – very eerie.  Since I have been here, I haven’t seen the boats come back without a pod, but I always hope.  Noticed eight boats leaving in a southerly direction.  Perhaps they received a tip on a pod’s location from fishing vessel?  Boats left the harbor at 6:42AM.  Didn’t take very long until the drive formation was seen on the southern horizon.

By 8:14AM, the drive boats had a pod just outside the Taiji harbor, and by 8:38AM, the pod was netted in the Cove.  It was a bottlenose dolphin pod – just like the dolphins on the Flipper TV show.  I’ve included the times of these events, because this seemed very fast whereas previous day took hours for the same process.

Skiffs were now controlling the pod within the Cove – pushing, scaring, and directing them to shallow waters where they were netted in again into a smaller space.  At 9:57AM, the trainers and representatives of the captivity industry arrived for selection of best looking of the pod for captivity.  Tarps were going up to conceal the trainers and killers “work”.  Just fifteen minutes later (10:12AM), the first skiff was taking two dolphins to the harbor pens to experience the glamor of a new captive lifestyle.  I’ve heard this similar description from SeaWorld employees – so I repeat it here to explain the insanity about to occur.  By 10:45AM, the last skiff took the 11th pod member to the harbor pens.  One baby dolphin was among the captive…

Plenty of pod members were still in the Cove, their fate unknown.

This pod was strong and did not want anything to do with the trainers – they wanted freedom.  Several of the pod were seen trying to escape or just trying to get away from the divers, running themselves onto a large jagged rock formation in the Cove.  Their snouts were bloody and bleeding profusely.  Two dolphins were seen touching snouts and looking into each others’ eyes – clearly knowing their lives were ending soon.  They just bobbed up and down in the water. A trainer touched another dolphin, and it took off trying to get away and rushed directly into the rock formation – another bloody snout, and a dolphin now tired of fighting.

10:54AM and the killing commenced.  I could hear dolphin squeals and high intensity thrashing.  Once you have seen the footage of this carnage, the sound alone brings back that memory, and you are crushed inside.  The Cove was now running red with blood.  A mere twenty minutes later, the first skiff was taking murdered pod family members from the Cove for the trip to the butcher shop in the harbor. By 11:43AM, the last of pod was leaving the Cove, dragged by ropes and hidden from my camera under tarps.

This bottlenose dolphin family had over thirty strong members. Eleven survived destined for a life in captivity; the rest were killed in the Cove.  I estimate twenty-one have died on this day.  I’ve included the times here so it is understood how quickly this pod went from being free to being someone’s lunch or dinner.  FOUR HOURS.

Update on status of this pod: Later on this day I witnessed a lot of activity in one of the harbor pens.  Trainer, diver, and feeder (which was fighting off the seagulls with a stick) seemed concerned – and I couldn’t see any activity in the pen.  Next morning I investigated this pen and saw a mother and baby dolphin barely active.  The poor mother was showing very little life.  Other pens are fairly active with dolphins moving around and often jumping.  The process these drive boat hunters put the pod through is horrendous, so many don’t survive.  While I am hoping this mother and baby survive, I also know their lives are already headed towards an early death in captivity.

Your ticket to a marine park sponsors this tragic activity.  While whale meat from the Antarctic ocean sells for a high price in Japan (when they can sell it at all), dolphin meat costs far less.  The drive hunters cannot sustain their business on dolphin meat sales – they must capture and sell dolphins to keep it thriving.  Captivity kills, and Taiji is proof of that premise.