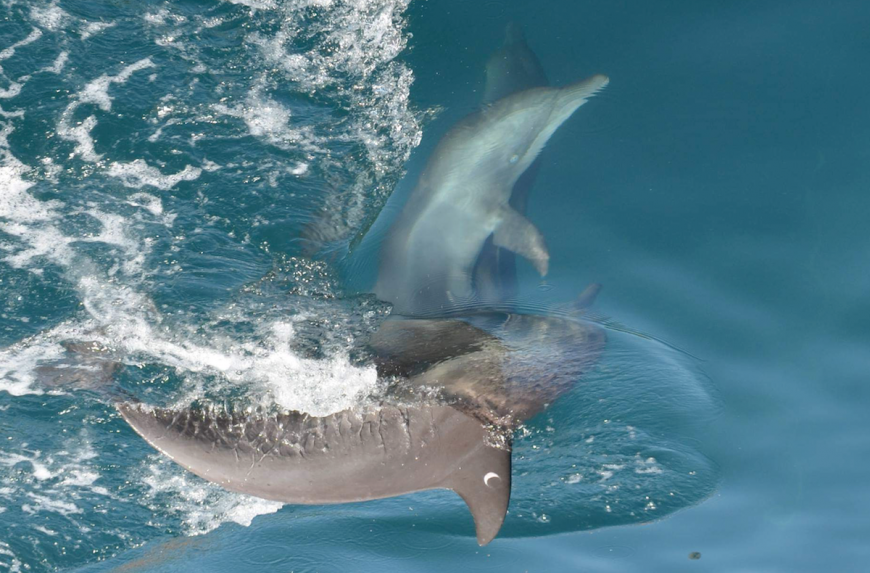 During the COVID-19 pandemic, our Indonesian dolphin rescue team in Bali has done an amazing job giving Rambo, Rocky, and Johnny the best possible living conditions. Now that Ric and I are finally back at the Umah Lumba Rehabilitation, Release and Retirement Center in Banyuwedang Bay, West Bali, we see a huge change in the dolphins’ behavior. They are not nearly as interested in people as they used to be. They are much more focused on each other and spend most of their time swimming, interacting, and playing underwater. All three dolphins have ceased their habit of constantly sticking their heads above the surface of the water looking for a handout or some attention from humans, the way captive dolphins typically do. They possess such vitality and a zest for life—something we saw no sign of when they were incarcerated in the barren chlorinated swimming pool at the Melka Excelsior Hotel in North Bali two years ago. The change they have undergone since they were introduced to real ocean water is truly astounding. No longer having to please crowds of people by swimming with them and performing in theatrical shows has no doubt also significantly improved the quality of their lives.

In the fall of 2019, I visited the Melka Excelsior Hotel in Lovina, North Bali, with Indonesian Campaign Manager Femke den Haas. This was just after Rocky and Rambo had been transferred out of the hotel’s swimming pool into a temporary floating holding pen off the coast of Sanur. Johnny and Dewa had to remain at the hotel while the sea pen in West Bali National Park was being built. Femke and her team members spent much time keeping them company during the wait. Dewa and Johnny were kept in separate tanks at the hotel, and they could not even see each other. During the years Johnny was confined there, he lived in total isolation most of the time.

Dewa, as many of you will remember, succumbed to longstanding illness in March 2020, five months after arriving at the sanctuary in West Bali National Park. In his case, regrettably, help arrived too late, and his physical and mental health had suffered too much damage. Johnny, on the other hand, has shown amazing progress since he arrived at the sanctuary in October 2019. When I saw him at the hotel almost two years ago, he was languishing completely motionless on the surface of the water, lethargic and depressed. Johnny, for some reason, has no teeth left. Confined to a small chlorinated swimming pool, he looked like a broken dolphin, completely alone, and with nothing left to live for. And look at him now, almost two years later. What a difference! Full of energy and confidence, he is a completely different dolphin. He spends lots of time swimming alongside Rocky and Rambo, just as spirited and playful as they are. 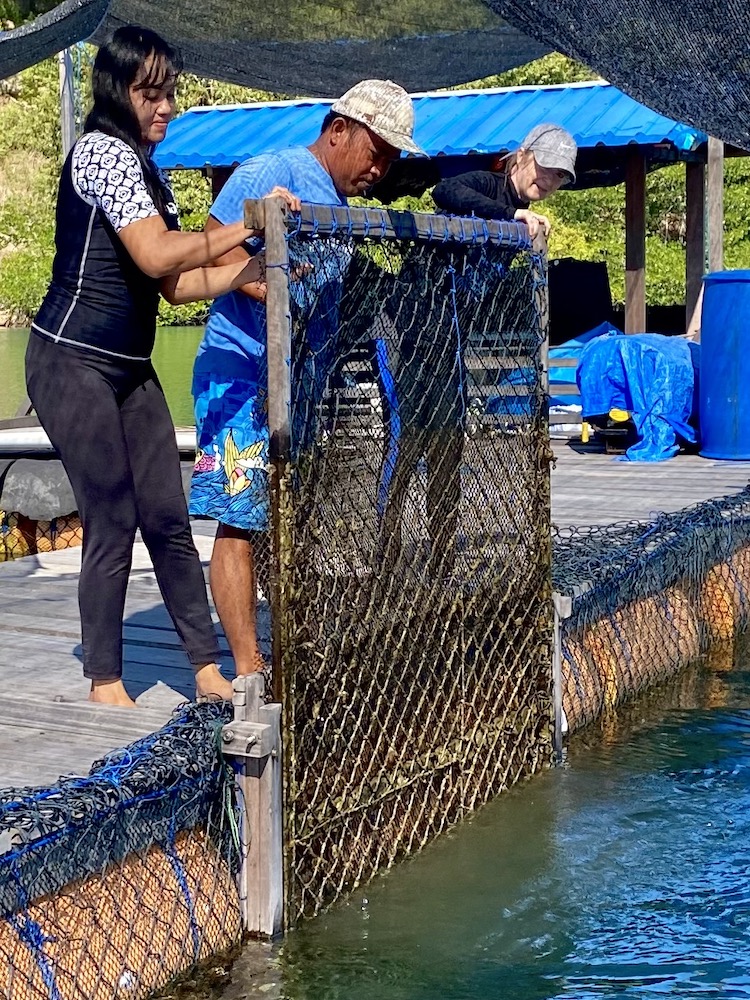 Wahyo, Susilo and Helene open the gate to the foraging pen. This is the highlight of the day for the dolphins, and they eagerly enter the pen to chase the fish. Credit: Ric O’Barry/Dolphin Project 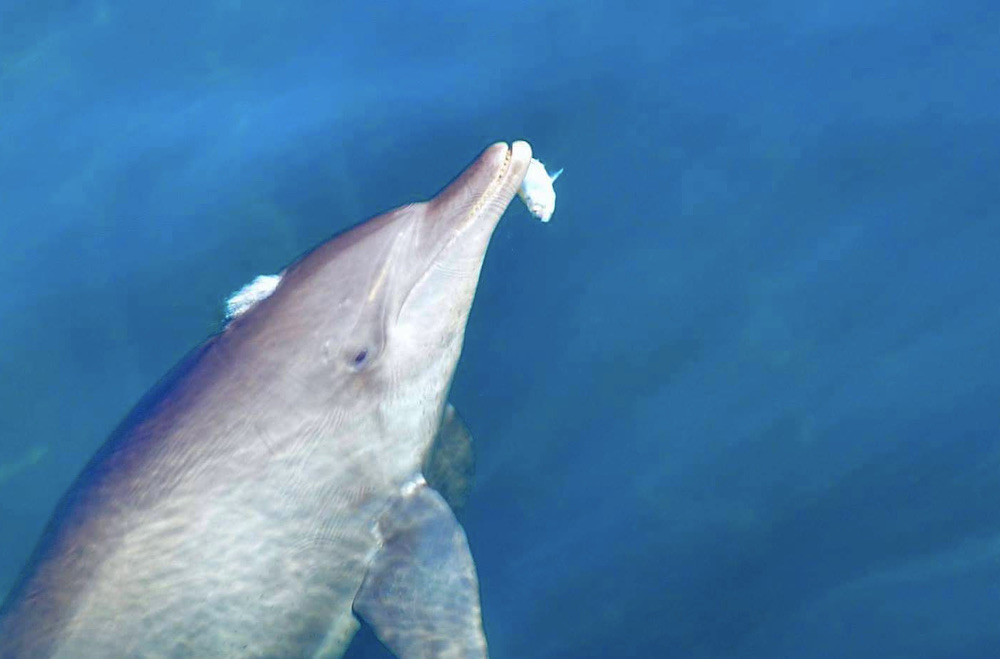 Rambo has caught a live fish and brings it to the surface of the water. Credit: Helene O’Barry/Dolphin Project

Our team has been feeding the dolphins as many live fish as possible every day. The fishermen assigned to the dolphin rehabilitation project arrive during the night with lots of fresh live fish. They load the fish into what Ric calls the “foraging pen,” which has mesh the fish cannot swim through. It is separated from the other sea pens with a gate that we open each morning. The dolphins zoom into the foraging pen as quickly as they can, and the chase begins. They pursue the fish with astonishing determination and agility, and the surface of the ocean is soon filled with turbulence and commotion. Through the crystal-clear water we can see the dolphins chase the fish, grab them, hold on to them, and swallow them whole. Even Johnny is sometimes able to grab and hold onto the slippery fish. He clamps down on the fish with such force, it stuns the fish. It is too early to say if his ability to catch fish is consistent, but the fact that he tries is remarkable.

It is obvious to me that the dolphins are having fun while hunting. And occasionally, one of them swims to the water’s surface with a fish in his mouth, tosses the still-living fish high into the air, and grabs it again, as if wanting the others to witness his success. During the chase, some of the fish try to escape by seeking refuge under the dock. Rocky, who is incredibly eager during the hunt, quickly swims under the dock and herds them back into the sea pen in the direction of Rambo and Johnny, who are then able to grab them. Even under the restrictions of being confined to a sea pen, the dolphins are able to implement hunting strategies that incorporate working together as a team, and all three dolphins get their share of fish. 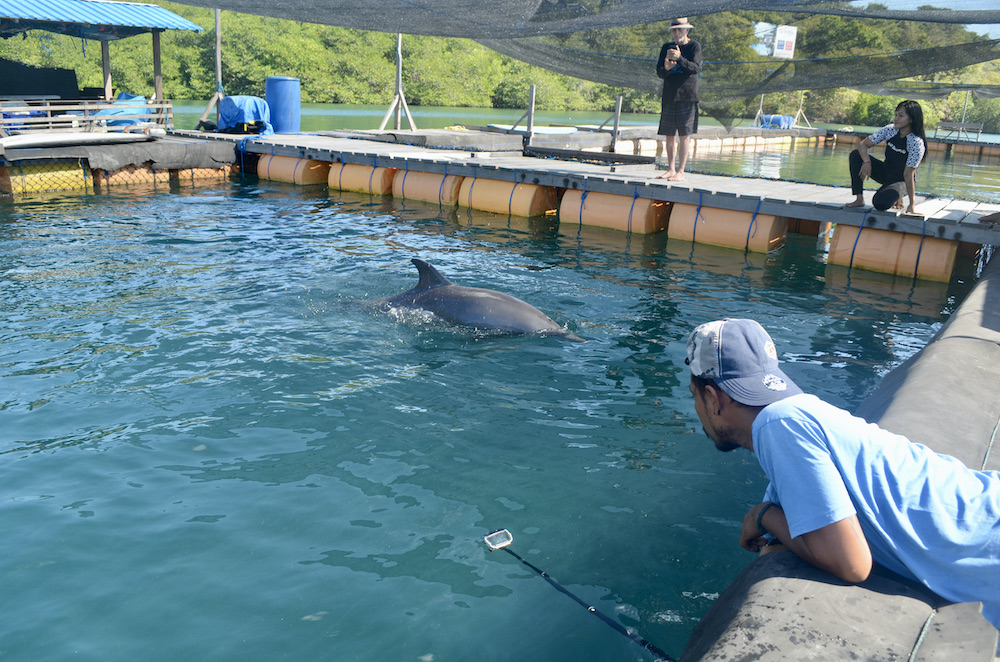 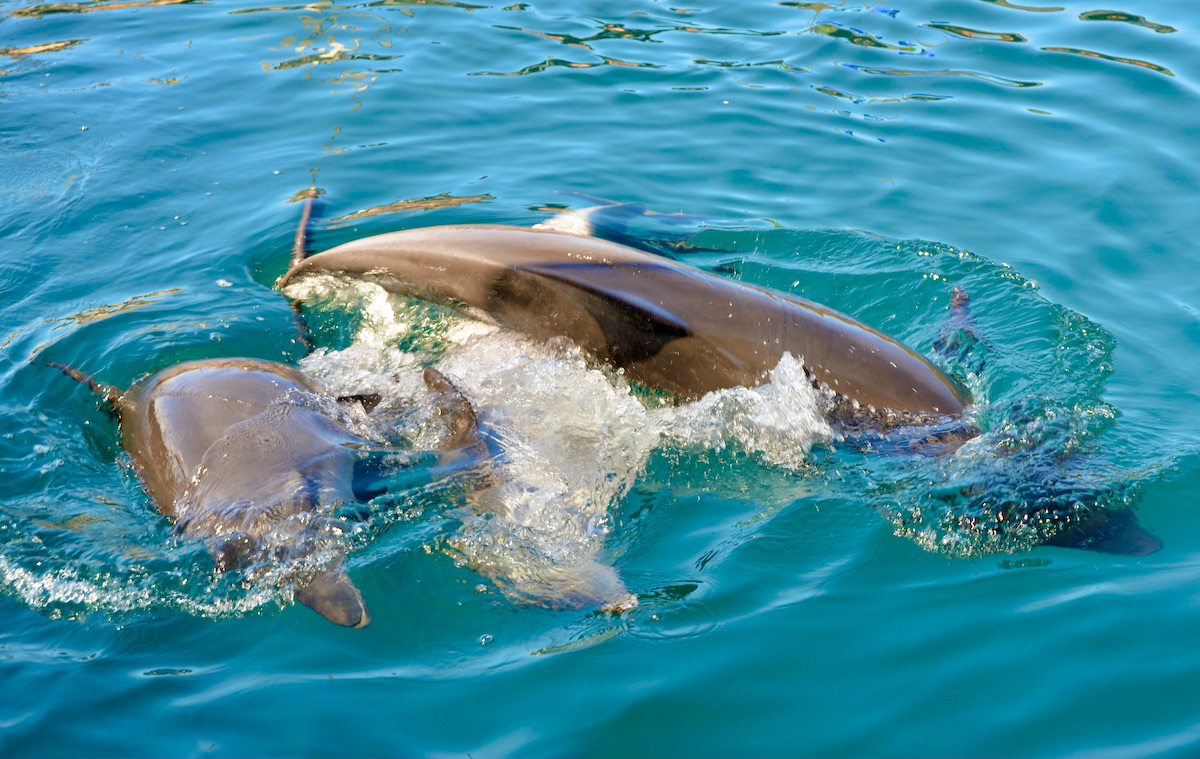 Most captive dolphins never get to experience the thrill of chasing live prey. They will spend their entire lives performing tricks for food rewards of defrosted dead fish, and dolphins that are born into this unnatural existence will never even know what a live fish looks like. When captive dolphins are hungry, they know they have to follow their trainers’ commands to be fed. Exploiting the dolphins’ hunger is part of any dolphinarium’s training program, and incarcerated dolphins are completely aware that humans are their only source of food. Dolphins in dolphinariums can never satisfy their own hunger by initiating a hunt, and this gives their trainers so much power over them. Dolphins in nature, on the other hand, put all their natural foraging skills to use when they are hungry: their strength, speed, intelligence, and ability to communicate, cooperate, and strategize. I feel sure that to a dolphin, chasing fish is not just a practical arrangement aimed at satisfying their hunger. It is also about employing and showing off their awe-inspiring skills. It’s about living, really.

To see Rocky, Rambo, and Johnny become alive and revert back to their true selves while chasing live fish is incredibly moving. When they forage, their real identities shine through the most, and the more live fish we can introduce to their sea pen, the better. They are still confined, albeit in a much healthier and stimulating space, but for as long as the hunt lasts, they radiate such self-confidence, control, and purpose. And I feel as if these moments offer a true glimpse into who and what they were before they were captured in the Java Sea more than ten years ago.