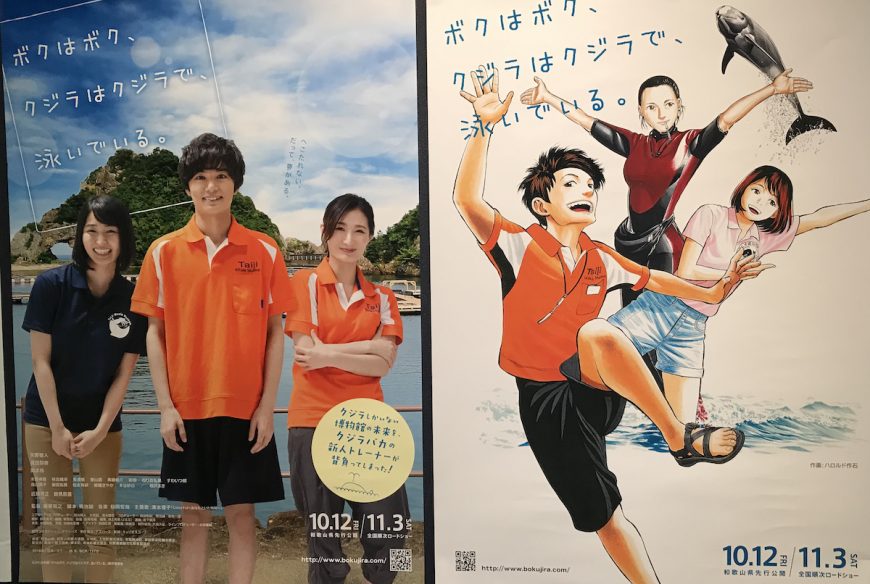 Boku wa boku, kujira wa kujirade, oyoideiru or for short, Bokujira, is a fictional movie set around a group of Taiji Whale Museum trainers that put together a festival to attract more visitors. Both in reality and in the movie the facility is a dated, controversial and struggling tourist attraction. The fictional trainers hope to create a happy and positive image for the museum. Undoubtedly the creators of the film hope to bring in more visitors to the actual museum as well.

In one scene, the museum director even acknowledged the facility as “the world’s most hated museum.”

The very first footage shown is a 15-second clip of the banger boats departing the harbor. This is the most that is shown of the drive hunts in the whole movie. An old fisherman – the mentor in the story – describes Taiji’s practices as “we take whales, we eat whales and we sell whales” in a very matter-of-fact manner. His words are portrayed as positive, reassuring wisdom for trainers concerned about so-called foreign activists sabotaging their festival. The main character, Taiichi, later expresses how the people who support whaling and the people who oppose it simply have different ways of thinking. He does not know which is right and which is wrong. Being of Japanese decent and raised heavily immersed in the country and culture, I understand this point. Western culture and Japanese culture are starkly different. However, I do not think that this is a valid point for defending whaling.

Taiichi’s character is a very puzzling one. To the other trainers’ dismay, he is appointed as lead trainer by the director early on in the movie. Out of all the Taiji Whale Museum trainers he knows the most about whales. I would even say he is obsessed. He seems to idolize the museum and the whaling history surrounding it, eccentrically expressing how his dream is to “…have a humpback whale captive in the museum to show everyone how amazing it is and inspire them to love whales.”

Another one of the main characters, Yui, shares how her dream is to become the best dolphin trainer in all of Japan. One of the other workers at the museum radiantly gushes about how she wants to “raise up” the museum. Time and time again, Bokujira glamorizes the trainers and paints Taiji’s practices as both innocent and victimized. 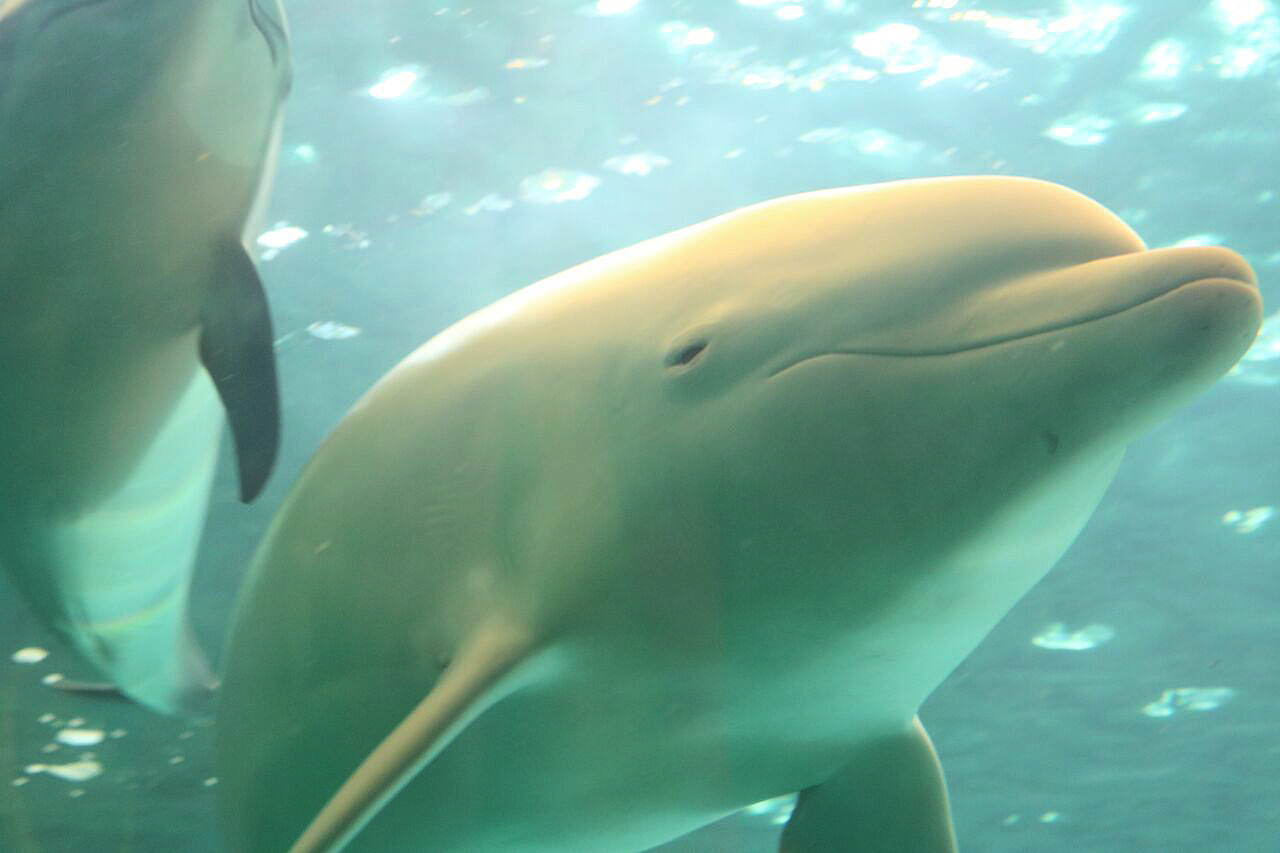 Not once do they acknowledge the drive hunts. They never acknowledge where all the dolphins came from. They barely show Angel, an albino dolphin caught in Taiji’s hunts. Only the tunnel of her tank is used for atmosphere in deep conversation scenes. The Moriura bay sea pens are never shown, although one would think a head trainer would seemingly have a lot of work to do there. They never show the main show area and its minuscule tanks containing bottlenose and Pacific white-sided dolphins. The vast majority of dolphin scenes take place at the public sea pens.

Despite their popularity, bottlenose dolphins are rarely shown. The spotlight is put on “Maron” the Risso’s dolphin Taiichi trains, “Beater” the pilot whale Yui is assigned to, and “Elvis” the temperamental false killer whale. Perhaps this is because these are more uncommon species seen in captivity and would make viewers want to visit the whale museum.

The most amusing thing about this movie is that the so-called activists that were painted as the bad guys are never shown. During the festival, the climax of the movie takes place as Yui masters surfing on the back of the pilot whale in front of an audience to triumphant music – a scene polar opposite to Free Willy jumping over the sea wall. Amidst the activity, there are two suspicious looking caucasian people holding up cameras. One of the museum staff follows them into the building and asks them a few questions. They respond they are not part of any anti-whaling group although they oppose whaling. But of course, they enjoyed the magical festival put together by the good guys of the museum. The scene was very awkward, its message, forced.

Although viewed with an open mind, Bokujira does not hold up as an entertaining film. The story moves so slowly and other subplots such as trainers’ wives cheating on them, drama and conflicts between trainers do not add any significance to the plot. My fear was that this film would appeal to a younger audience and make them want to become trainers. Thankfully it may be too boring and complicated for kids. 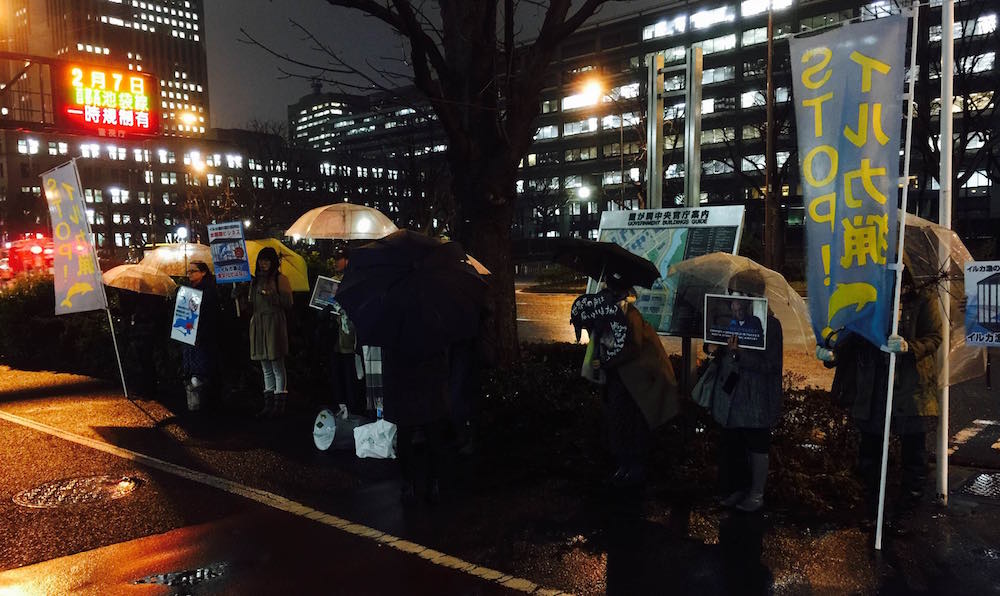 The gap between Western and Japanese cultures is definitely something that needs to be acknowledged and worked with in order to bring an end to the drive hunts. Some small regions in Japan have a history of sustenance whaling, but industrialized whaling and brutally capturing dolphins in the name of captivity is absolutely not part of Japanese culture. In Japan, people typically value others over themselves. Inconveniencing others in any way is avoided. This makes it difficult for individuals to speak out publicly, yet Japanese activists are slowly overcoming this and a growing number are putting on demonstrations to expose the cruelty of captivity. We must support the local activists so that they will have a greater impact than this movie on the people of Japan.