Back to Taiji Japan – A Summer Inspection 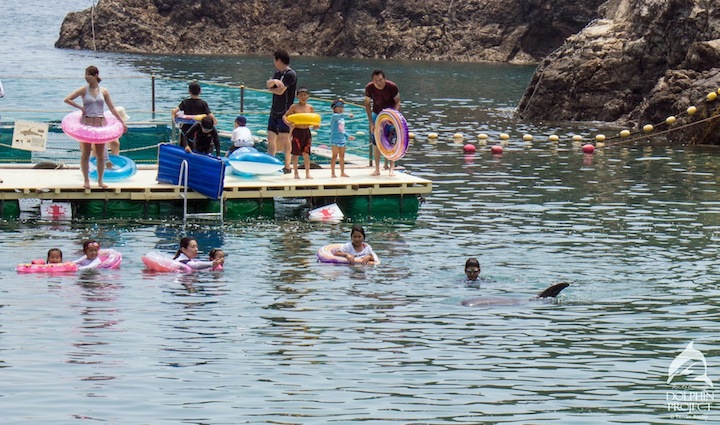 The day I learned about the “swim with dolphins” program in “The Cove” – I knew seeing this in person and getting the information out was something I needed to do.

I had the experience myself of swimming with captive dolphins years ago and did not get the “wow” factor, but instead had a wave of depression and sadness come over me with a chill.   You could say somehow those captive dolphins imprinted their feelings directly to me – and I didn’t ignore it.

Being here in Taiji, Japan, during some of the worst atrocities has forever changed my view on life and how we treat other creatures on this planet.  The Cove always feels like a morgue…

Taiji’s “Swim with Dolphins” summer program runs only a few weeks just before the dolphin hunting season, and I strongly doubt any of the Japanese tourists have any idea what really happens here.  Maybe they would not think this is such a great place for their family to frolic in the water if they saw the water turn bloody red, as I did during the hunting season.

It is the Japanese government that keeps the truth from the Japanese people and helps the dolphin hunters hide their bloody trade.

Two Risso’s dolphins were brought in to the Cove and urged to swim through the maze of swimmers and floating devices as trainers used chunks of squid – very enticing treat!  Of course, the dolphins do some tricks like flapping flippers against the surface making the children scream with excitement.  Without the trainers paddling around in kayaks with the squid “bait”, the dolphins spend their time away from the noise and splashing people.

In the middle of the swimming area a platform exists, which is actually netted to the sea floor and where people can view the dolphins.  They allow a dolphin out for “work” through an opening in the net, which I presume is closed during off hours.  The most exciting time on the platform is of course feeding time since the dolphins really don’t have much interest in being visible otherwise.

Whether or not this is really a safe environment is very questionable.  Children in the water range down to maybe 5 years old, and no lifeguard appeared on duty.  Beyond the couple of trainers, who are only around during the actual swim time (when they lead the dolphins out of the pen), only a presumed dolphin hunter/fishermen is on duty – his primary reason for being there appears to be counting the people in the water.

Two dolphin trainers take the captive Risso’s dolphin through the waters of the Cove, to the excitement of surrounding swimmers.  The Risso’s is kept interested by feeding him dead squid.  Photography by Terran Baylor.

Having the opportunity to swim-with and view wild marine life, this “experience” is nothing more than an extension of a fish tank.  Dolphins here are just automatons at this point – working for food…  The wild soul has left their existence.

Taiji “swim-with-dolphins” summer program.  You can just see the entrance to the killing cove for dolphins on the upper right-hand side of the photo.  The fin in the lower right-hand side is one of the captive Risso’s dolphins.  Photograpy by Terran Baylor.

I urge everyone keep away from institutions that use captured wild marine life – and actually any form of sentient life altogether.  Witness wild creatures in their own habitat where they have the right and ability to excuse themselves from participation.  As we hear about more reports of animals acting out against their captive lifestyles, we should recognize these are warnings about how we should not be keeping these beings for our own amusement.  Please do not believe you are truly learning anything by going to these “parks” – it is a fallacy coming from profit-hungry organizations, nothing more.

A Japanese television crew films the Taiji “swim-with-dolphins” program in the Cove.  The sea pen with the Risso’s dolphin is floating in the middle of the Cove where more than 850 dolphins were brutally slaughtered last fall — and the new hunting season begins on Sept. 1st.  Photography by Terran Baylor.

Once again, I will be here in Taiji for the dolphin hunting season – documenting and spreading the word about this small place on earth.  I am excited to see many Japanese people all around the country stand up and say this is wrong and should end.  Japan has the largest number of dolphinariums of any other country, so this will be a long fight to educate.  We must begin with the children.  Children stopped Iceland from whaling for two decades all because they learned about Keiko’s (whale from Free Willy movie) fate and people wanting to free him for real.

Thank you for not “buying a ticket”…

Take the pledge:  Don’t buy a ticket to a dolphin show or swim-with-captive-dolphins program.

A spy-hopping dolphin hopes for a handout from a trainer at Dolphin Base, one of Taiji’s many dolphin capture, training, and brokering facilities.  Photography by Terran Baylor.