At the Taiji Whale Museum 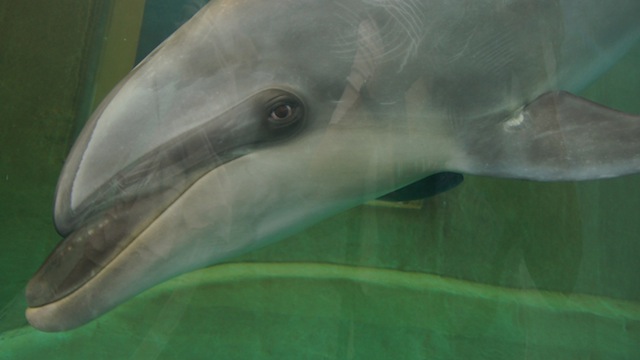 Yesterday was a great relief for us all in Taiji as the dolphins swam free!  So, I went to visit the dear souls captive at the Taiji Whale Museum to see how they were doing.  I have learnt to take care of myself here, so a visit on a slaughter day, when we feel like our own hearts have been ripped open, is not an option.

I went straight to see the two pantropical dolphins, Hope and Faith, who had been moved earlier this year from the terrible “tank” inside.  I found them in a small swimming pool with the little striped dolphin who had recently been captured and the rest of its pod slaughtered (25th Oct 2012).  Hope and Faith did not appear to be doing a lot, but then what can beautiful, wild dolphins who once swam free in the vast oceans do in a small swimming pool?  I watched them for about half an hour.  They mostly just bobbed about and twice dived and swam around the pool.  They seemed to be mimicking one another.  What one did, the other did as well.  Both appeared to be accepting of their sad conditions.

The recently caught striped dolphin however looked very stressed to me – I would say in shock.  This dolphin bobbed about slightly to one side of Hope and Faith, spy hoping mostly and not at all relaxed.  Newly captive and not yet used to its surroundings, it was heart breaking to see.  I suppose in time this dear wee soul will eventually pass into the same mollified state the other dolphins beside him are in, just to survive the trauma of captivity, or as so often happens, just loose the will to live.

I tore myself away and moved on to look at the other dolphins, most of whom I recognized.  The ones fortunate enough to be in the sea pens were definitely doing better than those in the tanks.  In the covered dolphin house, there were only three bottlenose dolphins – last January when I was here there were four.  The large female dolphin that seems to be in charge of this pool was there, craving my attention as she has done before.  A beautiful large bottlenose she is, who seemed to like me playing and talking to her on the other side of the glass wall.  If I nodded my head, so did she, if I put my face right up close to the glass, so did she.  I apologized to her, as tears streamed down my face and told her how much I loved her.  As long as I held her gaze she didn’t look away.  I hope and pray she knows she is loved.

I wish with all my heart we could do better for these sweethearts.  Please, never ever buy a ticket to a dolphin show…deep and dark tragedy is what lies beneath.