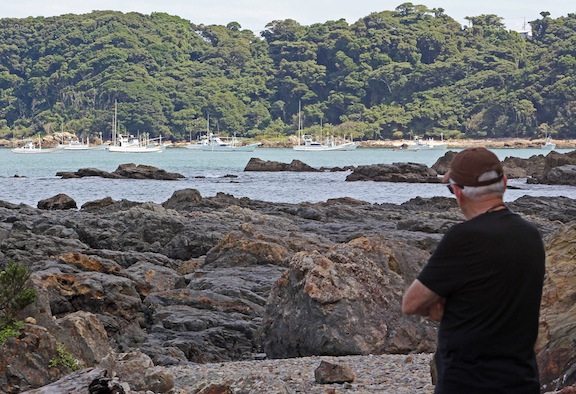 On Friday morning, we were up at 4:00 AM.   Eleven  Cove Monitors, which included Ric O’Barry and several new Monitors who are training to come back to Taiji later in the season, headed into Taji.  We all stay in the nearby town of Kii-Katsurra, which has restaurants and more secure hotels than Taiji.

In fact, at this time of year, Taiji is virtually a ghost town.  It closes down, when it could be a vibrant tourist center with plenty of activity.  At least, that is our hope, if we can shut down the dolphin hunts and promote Taiji as a center for eco-tourism.

Most of our conversations this morning revolved around the hunters not finding dolphins today.  But by 8AM the undeniable lines of boats on the horizon marked another dolphin drive.

This one was different.   There were three different formations on the horizon, all headed for the notorious Cove.   After several hours, one small pod of 15 or so pilot whales ended up outwitting the Japanese banger boats and made it back out to sea.

As they steamed out to help the other boats, a pod of bottlenose dolphins became their next prey.  Bottlenose are particularly important to the fishermen for the captive trade – they are the same species as “Flipper” and so are highly prized by dolphinariums.

The dolphin hunters ended up driving the pod into the mouth of Taiji Harbor.  Three boats kept the pod pinned against the rocks for the next four and a half hours, as the other two formations went back and forth out at sea.   Those pods were spotted several times fleeing for the open ocean, but the banger boats always managed to get them headed back in the direction of the Cove.

Eventually all pods were herded together and were driven into the Cove.  In years past, in our experience, the dolphin hunters would have given in long before this.  It can only be concluded that they have several orders for captive bottlenose dolphins that need to get filled.

Bottlenose dolphins behind the nets in the Cove, many of which will be picked for a life in captivity.  Photo by Vickie Collins.

Taiji is a hub for the international blood dolphin$ trade.  China and Japanese marine parks are some of the largest consumers of live dolphins from Taiji.

Ric explained today that many of these animals are so stressed from the 6-7 hour chase and the realization that they have been separated from their own family pod and joined with two other pods, that it may be several weeks before they will eat.   You have to wonder how many of them can make it through the stress and no food for that length of time.  Any dead dolphins in Taiji, of course, wind up on supermarket shelves.

Then, on Saturday, these individuals were separated from the remaining members of the pod to be tamed and eventually shipped around the world for our amusement.  They face a shortened life of medicated, dead food for doing stupid tricks.

Bottlenose dolphins in the Cove.  Photo by Tim Burns.

The dolphin hunters took 11-13 dolphins captive.  One juvenile dolphin left for the harbor pens, but came back under the tarps.  A few minutes later, a larger dolphin came out headed to the pens, but no juvenile.   We stationed someone quickly at the Fishermen’s Union in Taiji harbor, where the slaughterhouse processes the meat, and sure enough they came over about an hour later and unloaded the poor dead juvenile dolphin for processing.  We have been told by our contacts in Taiji that dolphins that die cannot be sold for human food, so likely this dolphin will wind up as pet food or fertilizer.

The remaining dolphins were pushed back to sea.  Ric points out there is no telling how many dolphins died of stress or will die of stress due to the six-plus hours of driving the dolphins into the Cove.

Ric O’Barry watches the drive boats of the dolphin hunters manuever outside the Cove in Taiji.  Photo by Tim Burns.