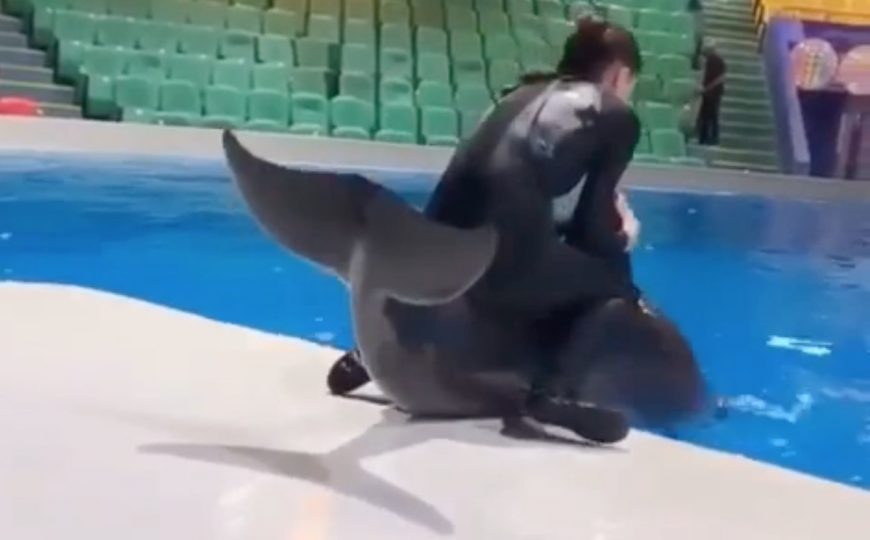 Many Internet users reacted with shock when footage emerged of a dolphin trainer straddling a dolphin that was helplessly beached on the concrete slide-out at Dubai Dolphinarium in United Arab Emirates. And with good reasons. To press a dolphin against the hard poolside floor by riding on him is both cruel and disrespectful. For another dolphin trainer to laugh at the scene, film it and then go post it online for the entire world to see is equally repugnant.

In nature, dolphins live in a gravity-free world. Sitting on a stranded dolphin applies enormous pressure on his internal organs. It is dangerous and reckless. There is more: What about the psychological trauma it may have caused? I believe it must have been a deeply traumatic experience for that dolphin, and when I look at the footage, one term comes to mind: animal humiliation. Because that is what it was. 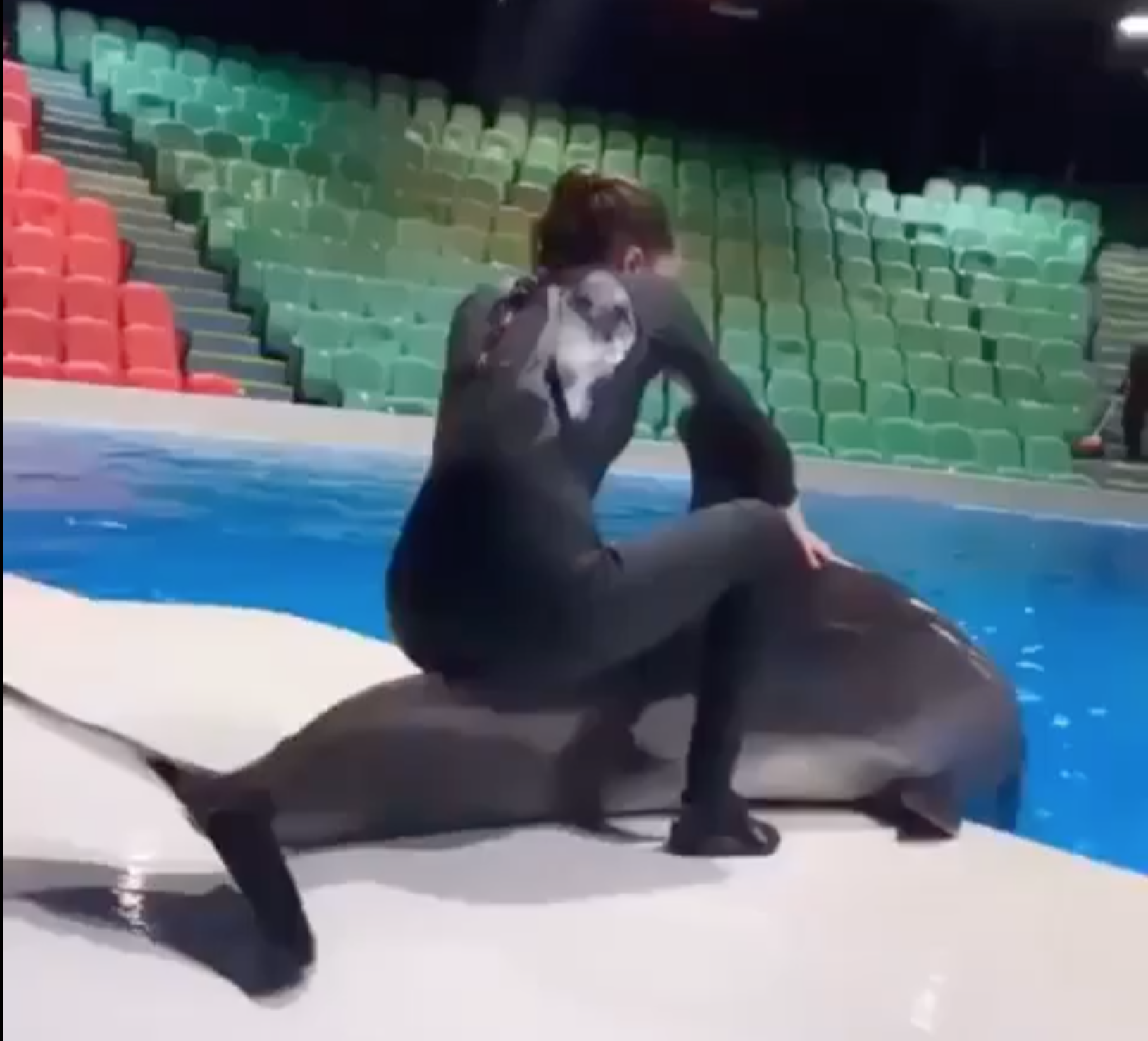 The trainers, however, apparently thought it was entertaining and saw it as an opportunity to generate some “likes” on Instagram. At the end of the video, the one trainer clung to the dolphin´s dorsal fin and rode him into the pool as if he were a ride-on toy. The dolphin was unable to defend himself against the trainer’s actions. When millions of people viewed the footage online, they saw that dolphin completely defenseless and subdued. While many people thought it was repulsive, others will now think that it is okay to treat dolphins as if they are playthings. That is the message the trainers in the video send: Dolphins are ours to exploit as we wish. How they feel about it doesn’t matter.

Dubai Dolphinarium opened its doors to the public in 2008. It currently uses six bottlenose dolphins in shows and a captive dolphin swim program. Its website lures in customers with these enticing words: “Experience an adventure of a lifetime with Majestic Dolphin Swim of Dolphin Planet. Swim with our amazing dolphins on a truly intimate level. Enjoy a dorsal fin tow or belly ride as well as being able to hug, kiss & dance with these incredible mammals.” Several travel companies endorse and advertise what goes on at Dubai Dolphinarium, thereby making the animal exploitation even more profitable.

I doubt if any of the tourists who purchase tickets ever stop to think about how the dolphins ended up in small concrete tanks, or how they feel about being ridden, kissed, and prodded by humans, with no chance to escape. According to Cetabase, which monitors the status of captive dolphins worldwide, three of the dolphins at Dubai Dolphinarium were sent there from Japan. They were captured in Taiji’s infamous killing cove. Two of the dolphins were born in captivity, and one was captured in the Black Sea. We do not know where the dolphin in the footage came from, and it doesn’t matter. For the rest of the dolphins’ lives, trainers will control them to make them physically available to hordes of groping tourists who each pays about 170 US dollars for an intimate dolphin encounter. No dolphin should have to endure such crude treatment. 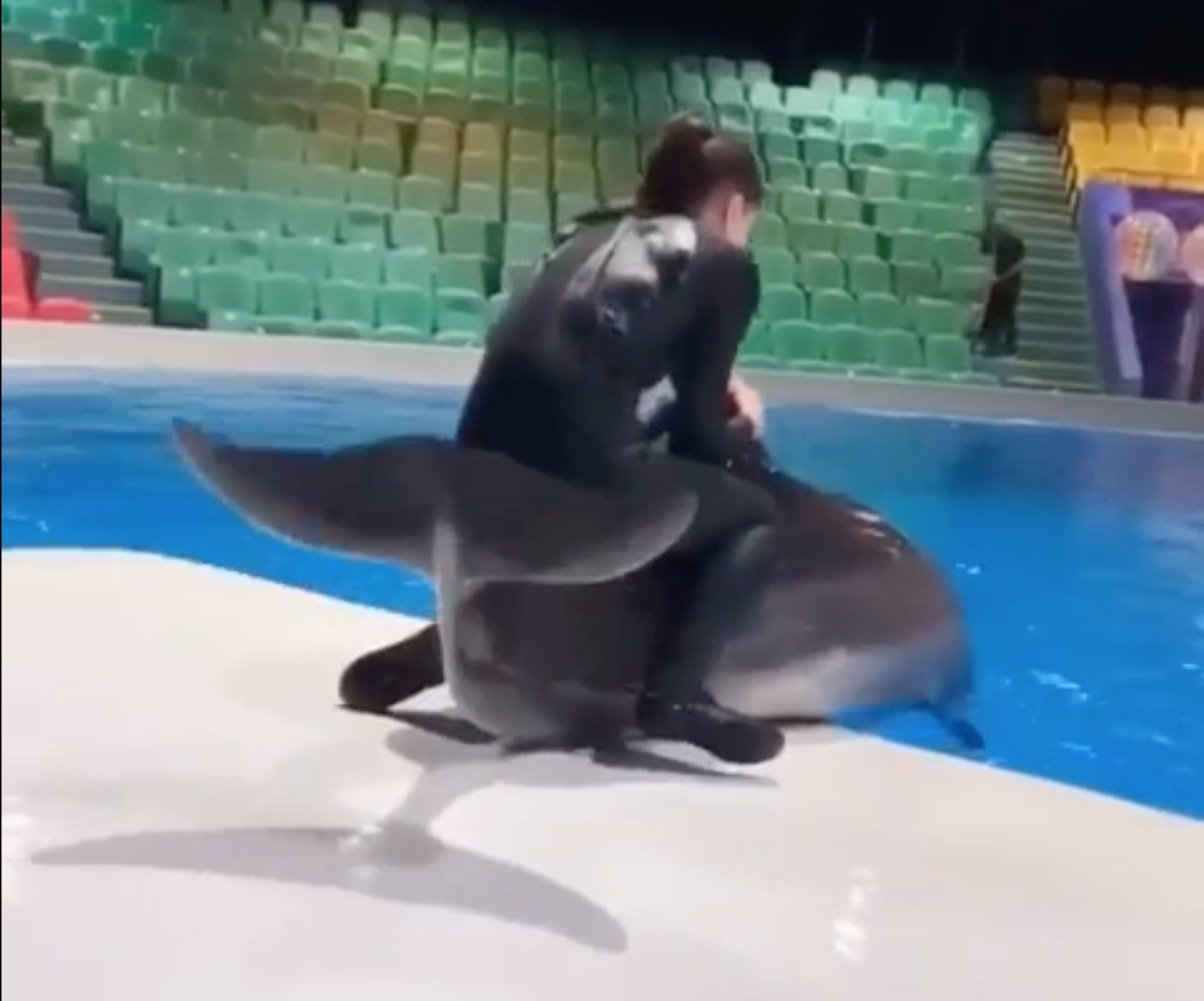 Trainer “rides” a dolphin from concrete slide-out into the pool at Dubai Dolphinarium. Credit: @aurelia_1534⁠

They know very well that the dolphins from Taiji went through a horrifying capture. The dolphins watched helplessly as their families were slaughtered right in front of them. They were dragged away and dumped into sea cages by dolphin trainers who, just like the trainers at Dubai Dolphinarium, claim to “love” dolphins. Having experienced unimaginable trauma at the hands of humans, the dolphins’ role in life is now reduced to giving rides to tourists and performing in theatrical shows to entertain never-ending crowds of holiday makers.

The dolphins at Dubai Dolphinarium suffer the heavy weight of so much more than trainers riding their backs. The ones captured in Taiji lost everything on that fateful day when hunters drove them into the cove: Gone are their families, their vast ocean world, and the ability to swim freely. Dolphin trainers stole them from their families, and throughout the entire ordeal, the dolphins were utterly defenseless against the injustice.

And look where they ended up: in a minuscule concrete tank inside a building in Dubai, where other dolphin trainers think it is perfectly acceptable to subdue and humiliate them in front of millions of people.