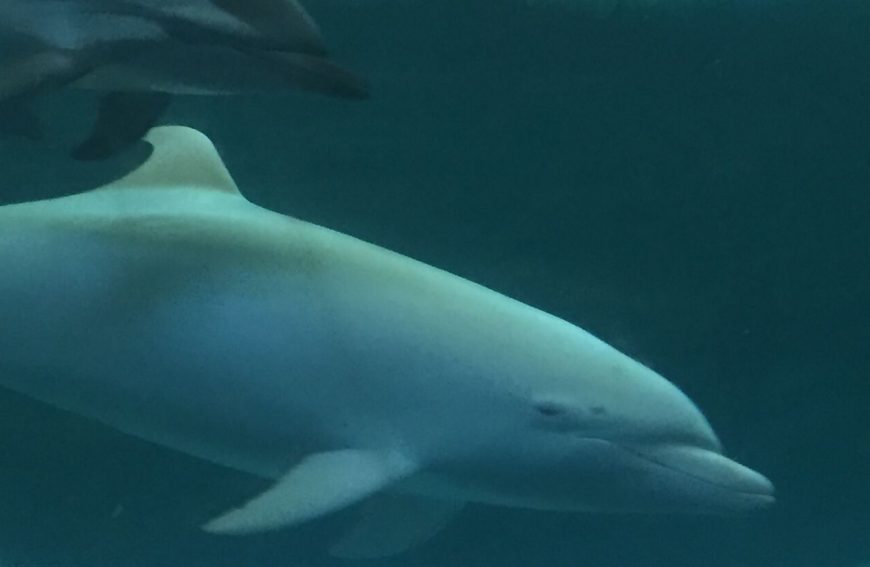 It is with very mixed emotions that I visit the Taiji Whale Museum, a captive display minutes from where dolphins are both caught and slaughtered in the infamous “cove.”

Of course, I am very much against captivity. In addition to being a Cove Monitor for Ric O’Barry’s Dolphin Project, I also do educational presentations, designed to open the eyes of children of all ages to the realities of captivity. In them, I urge children to arrive to their own conclusions, but I provide enough information so that both sides of the issue can be accurately represented. As such, I have visited places such as SeaWorld and Six Flags – both in California, and both, horrible places. Yet, neither can compare to the Taiji Whale Museum. I would like to believe the captives know the difference between those who simply visit to gawk and those who come to comfort. And that’s what I did, interacting with Angel, the albino dolphin caught in one of Taiji’s horrific drives as well as other dolphins, forever trapped in the worst tank of the facility.”

The Taiji Whale Museum is a very strange place. On display is an exhibit on “whale biology,” consisting of countless jars with tiny dolphin fetuses in them. There is another display that explains the history of whaling, and how the techniques used to kill whales have improved. But the gift shop is perhaps one of the strangest places I’ve ever visited. For sale is all sorts of dolphin and whale paraphernalia, everything one could imagine. And there are food products too – whale meat, for human consumption.

The “living” dolphins are the “displays” which I am most affected by. The main performance pool consists of two bottlenose and two Pacific white-sided dolphins, existing within approximately a five foot deep space. One day, a dolphin approached me and began clicking furiously. I wanted to apologize for what my species had done to it and I do recall promising the dolphin I would continue fighting for their species. I couldn’t help notice its eye, which held mine in a combination of horrors.

The lagoon is quite large by tank standards, but is divided into several sections, consisting of many sea pens. These contain a large number of both bottlenose and Risso’s dolphins. Outside the pens are other dolphins which circle around the lagoon. Two Risso’s dolphins, separated by nets, were attempting to get to one another. A pilot whale was performing while another was logging listlessly in a sea pen. One face I didn’t spot this year was the false killer whale. Was the dolphin transferred? Did it die? Of course, there was no way I could ever know. I checked on the two Risso’s captured last October. One is a piebald who is mainly white but has patches of grey and the other is a true albino. I witnessed the piebald capture first-hand, with the albino captured on my visit home from Taiji. Both dolphins were separated, with the albino covered in rake marks. This represents another tragedy of captivity, as there is simply no place to go to escape conflict. In the wild, one can simply swim away from an aggressor, however, when confined in a floating box, there is no escape.

The last tank is truly the worst. At its entrance is a tiny, plastic pool with an unfortunate ray floating in it, available for petting. Inside the building is where Angel and other dolphins reside. You can walk though this tank, and an overhead tunnel allows for dolphins to swim over you. As you follow the path up to the top, there are several viewing windows. I have my preferred window, where sometimes the dolphins will interact. In one instance, the dolphins came over and hung upside down, looking at me directly in the eye. The window squeaked as they rubbed against it. At times, Angel, as well as the spotted and striped dolphins appeared to seek attention. I can only imagine their boredom.

There are a total of eight dolphins in this tiny tank. There is no sunlight for them. When they surface, they see a roof. Their only stimulation is during feeding time, where they are required to perform tricks for dead fish. The majority of time is spent swimming in endless circles. What a cruel twist of fate, with the ocean just steps away, and yet, they suffer here.

Angel is indeed a poster child for the rest of the captives, yet each dolphin shares a similar story of being driven into the cove, and their families, slaughtered in view, or taken to other captive facilties. Captivity means no choices, no freedom and being at the complete mercy of your captors.

A good place to start is the Take Action section on DolphinProject.net. Kids can start a Cove Club, and educators can familiarize themselves with the Study Guides posted.

I have great hope that someday, the captive industry will come to a permanent end. Until then, we must collectively continue the fight, with education the best weapon of choice.